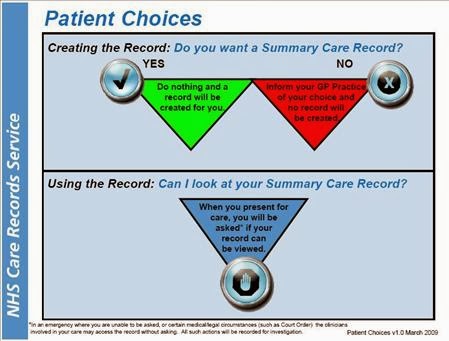 The British Government has announced plans to change the way the NHS stores medical records. Medical records are currently kept at your GP's surgery or in the medical records depot of a primary care trust, if you've been a regular hospital inpatient. These are in the form of good old fashioned paper hardcopy and only duplicated electronically for temporary purposes; this is because of the need for security. Medical records are classified as highly confidential and the depot at my hospital is protected by a double door which is permanently locked and only accessible by a special ID system or through a reception desk. The records themselves come in folders which vary in size, but can be big enough to need cardboard boxes to carry them. These then have to be transported everywhere a patient goes; this was one of the duties of We The Porters. It was quite a task, I can tell you! But we managed it; we got used to it. That system worked. However, you can't stop governments from striving like crazy to fix any thing that is not broken; they've decided to change the system into something involving "Summary Care Records". This is a single electronic database of your basic medical records which can be accessed from any National Health Service carer in the country, see: http://www.nhs.uk/NHSEngland/thenhs/records/healthrecords/Pages/servicedescription.aspx. The idea behind it is that it will allow those carers access to records they wouldn't otherwise get if you are treated at a location you don't normally attend. The proponents of the scheme swear that the database is highly secure and will never be accessed by any unauthorized person. However a large number of access points will be needed; many thousands of hospitals, clinics, care homes and GP surgeries from Land's End to John o'Groats, and probably a number within each of them. Combined with this will be the fact that the access points will be handled by overworked and underpaid NHS doctors and nurses who will inevitably make mistakes. There have been many scandals along these lines, as well as concerns that the government is planning on bringing in an "outside interested party" to handle the records like contractors or service partners. I have a lot of negative experience of this myself from being managed by a private contractor and I can tell you that these entities are invariable unethical, irresponsible and incompetent.

My advice is to opt-out of the scheme; and this can be done easily by filling out a form. This is the NHS' official one, see: http://www.nhscarerecords.nhs.uk/optout/optout.pdf. Unfortunately since this form was published, further outrages have emerged that show the government is trying to worm us all onto some kind of database, even if you return the above form, see: http://www.pulsetoday.co.uk/your-practice/practice-topics/it/caredata-will-allow-police-access-to-patient-record-without-informing-gps/20005800.article#.Uwh5uPl_uSo (Thanks to Andrew Johnson and other members of the Cognoscence Yahoo group for this information). This website has been set up to monitor and campaign on this issue, see: http://medconfidential.org/. Many doctors and nurses are also unhappy with the Summary Care Records system. It flies in the face of centuries of medical ethics to remove the existing confidentiality classification level without the patient's consent. The justification is that the patient does give consent because the opt-out form is freely available, but as "fmoreton", a member of the Cognoscence group points out, a lack of response at all is interpreted as consent being given. Surely such a radical change in policy instead should be an opt in. I have a strange feeling that at some point a solution will be suggested to make the system workable, internal microchip implants in the patients' bodies. In fact we don't have to wait; such technology already exists and has been successfully trialled, see: http://www.youtube.com/watch?v=1a-BmZJfKEg. It would solve the security and access problems, and also overcome the changes to confidentiality. After all, an implanted chip is probably more secure than the current single remote database. All the authorities need is a public willing to accept it in large numbers. The problem is that this kind of cyborg technology is open to abuse because it can be adapted for other purposes, such as financial, employment, security and almost any other purpose that could give the authorities so much more control over the population than they currently enjoy.
See here for background: http://hpanwo-voice.blogspot.co.uk/2014/01/neon-nettle-article.html.
And: http://hpanwo-voice.blogspot.co.uk/2014/01/all-people-to-be-microchipped-within.html.
Posted by Ben Emlyn-Jones at 20:26