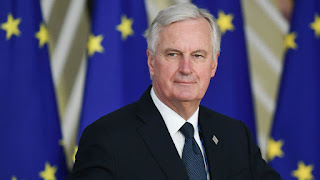 For anybody who thought I would shut up about Brexit now it has actually happened, sorry to disappoint you. Actually the real fun is just beginning. Everything that has happened between and was simply about delivering the referendum. As I explain in my HPANWO TV coverage, see: http://hpanwo-tv.blogspot.com/2020/02/brexit-day.html, on that moment everything did not automatically change. At most of the laws that were in force at remained in force. To dismantle the federal infrastructure into which has been hogtied over the last seventy years cannot be done overnight. As I've said before, this is a big test of the sincerity of Prime Minister Boris Johnson. Is he a fake Brexiteer? Will he now turn into another Theresa May now he has "got Brexit done!"? Well, so far so good. Michel Barnier's negotiating team in have been taking a very obstinate and vacillating position. They want to continue exploiting British fisheries for up to twenty-five years. They also insist on the continuing supremacy of the European Court of Justice on British soil and several trade demands that look like they're intended to cause economic sabotage. They describe this as "maintaining a level playing field". For example, if does not submit to the European Union's fishing demands they have threatened to impose extra duty on the 's fish exports to the continent. This is after just two years ago they themselves suggested a "Canada-style" free trade agreement. Boris' response is so far hopeful. He has refused to fall into Barnier's trap, and has called the EU's attitude "ridiculous and unreasonable", and he is right. Source: https://www.parliament.uk/business/publications/research/eu-referendum/negotiations/. Even Nigel Farage has congratulated Boris as a result.

These negotiations are scheduled to take eleven months, so by the end of the year the whole process should be complete. Some people, especially in the EU, are asking for this transitional period to be extended for varying lengths of time. We know all about the EU's love of extensions, see: https://hpanwo-tv.blogspot.com/2019/10/another-bloody-delay.html and the background links below. Boris Johnson has so far insisted that the current pace is maintained. Best of all, he has not ruled out simply walking out of the negotiations and going back to the World Trade Organization rules, the "Bali Package". This is a perfect response because ' entire position is based on wanting to arrange a deal more than they do. Boris' judgement is that they need us more than we need them. You may have heard the phrase " on " which is the prospect of the becoming a huge enterprise zone; a deregulated financial relationship on the borders of a monetized empire. My own view was that we should have gone for the WTO option as the primary strategy to begin with. Before Brexit I was concerned that we would not even have made the progress we have. It was quite likely we would end up with a "half-Brexit" or "Brexit lite" in which we would remain indefinitely... ie: permanently, in the EU customs zone or Common Market. This has not happened so far. We won't know for sure how this will develop, but hopefully in a few weeks or months the situation will become clearer. One thing is for sure, the globalists are looking for ways to give a punishment beating and seems to be trying to arrange that. Everything bad that happens in the next decade is going to be blamed on Brexit. If a rare species of beetle in the goes extinct... that's because of Brexit! And Guy Verhofstadt has told us that the door is always open to go back. Don't be surprised if a "rejoin alliance" emerges before the next general election consisting of the political parties who tried to bully Boris last year. We will have to make sure that in the event of any post-Brexit strife the true culprits are exposed.
See here for background: http://hpanwo.blogspot.com/2019/10/brexit-portal.html.
Posted by Ben Emlyn-Jones at 18:49