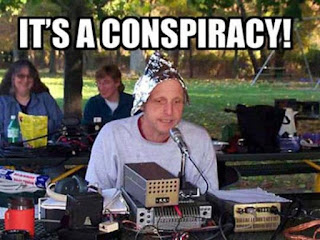 The Guardian newspaper is becoming more and more toxic every day. I fear I might die from soy poisoning every time I even see its banner. Only yesterday it published an article about David Icke that in my view redefines fake news, see: https://hpanwo-voice.blogspot.com/2019/02/david-icke-banned-from-australia.html. It has followed up with an opinion piece by an Austrian journalist called Julia Ebner that criticizes conspiracy theory culture. She claims that there is an "organized network" of conspiracy theoretical social media users who are engaged in an all-out online information war against Western democracy. This results in so-called legitimate political debate and street protests being undermined and subverted. She specifically names the QAnon phenomenon; and I myself have covered that in the background links at the bottom. Apparently this suspected tin foil hat mafia changed the result of a German state election. The evidence for this is that people like us use conspiracist hashtags combined with those of trending topics. Also that we spend a lot of time on encrypted apps like Discord. God forbid, we've even invented our own blockchain cryptocurrency, Initiative Q. As an insider, I can assure you that the conspirasphere is not capable of any kind of unified organized action because it is not a singular political force. On the contrary, at the moment its principle focus is on infighting... and I've had to deal with far more of that than I would like, as regular HPANWO-readers will know, for example see: https://hpanwo-voice.blogspot.com/2016/09/truth-mobbed-again.html. The strategic use of hashtags is perfectly common and acceptable practice on social media, and most skilled and experienced posters do it. This is not "undermining democracy", it is simply people the author doesn't agree with expressing an opinion. If that influences an election result then so be it. It simply means that a lot of people have comes across information that makes them think a certain way. That's what freedom of speech does. The reason we use encrypted apps is because with the massive censorship campaign against us it's the only place we'll be safe from banning and deplatforming, see: http://hpanwo-tv.blogspot.com/2019/01/youtube-recommendation-change.html. If the regular social media companies would stop persecuting us for our beliefs we would return to them immediately. Cryptocurrency is a vital way of preserving financial control of our lives in an increasingly centralized, monitored and regulated banking system that has generated terrible economic instability, see: https://hpanwo-radio.blogspot.com/2017/03/programme-229-podcast-cryptocurrency.html.

Mzzzzzzzzz Ebner riles against the fact that 60% of Britons believe in at least one conspiracy theory, but I think that's a good thing, see: https://hpanwo-voice.blogspot.com/2018/12/60-of-britons-believe-in-conspiracy.html. Naturally the inevitable anti-Semitism card is played and I've explained already how idiotic that is, see: https://hpanwo-voice.blogspot.com/2018/03/anti-semitic-mural.html. I myself am deeply concerned about the rising levels of immigration, but I always add the proviso that this does not justify hostility or prejudice to any individual or group of people. Immigration is a strategy being used by the globalists and people of all races, religions or nationalities are equally harmed by it. The solution is to expose that strategy, see: https://hpanwo-voice.blogspot.com/2017/02/trumps-travel-ban.html. The author writes: "In QAnon forums, it is hard to overlook the holy mess of logical fallacies and contradictions... this virtual cosmos of absurd stories... Its adherents link MI6, Facebook and the Rothschilds to the , , the Nazis, the Illuminati and aliens in order to explain that climate change is a hoax." That is a silly piece of rhetoric. She does not explain why we are wrong on any of these points. There is no discussion here; no argument. It's a very anti-intellectual thing to say. The most sinister part of Julia Ebner's article is where she writes: "The architecture of social media platforms plays into the hands of extreme fringe groups by pushing users towards sensationalist content. The tech firms' business models and algorithms are geared to maximise the time users spend on their platforms... But solutions to these problems need to be identified. Policies should require greater algorithmic transparency and accountability... it will be necessary to regulate against harmful infrastructures and malicious behaviours." What she means is that we need more censorship. Source: https://www.theguardian.com/commentisfree/2019/feb/18/online-conspiracy-theorists-democracy. This is exactly what I predicted and what we should have expected. In a way we can now rejoice because it is proof that we are having an impact on the world. It also adds weight to the argument at Q is real because The Guarr-iddian would not respond so vehemently to a bit of larping on the Chans. Sooner or later the internet is going to split in two. There will be the "mainstream internet" which will include all the big social media platforms and they will consist solely of mainstream fake news. Independent content creators will not be permitted to post anything more controversial than a puppy playing in a paddling pool. Then there will be "Internet 2" which will consist of myriad independent blockchain and peer-to-peer systems together with websites on the dark net. This is where all the interesting stuff will be; the conspiracy revelations, the paranormal research, the UFOlogy, the radical politics. The authorities cannot win this war because the internet is virtually indestructible. You can ban a user or take down a website, but you cannot un-invent computers or the means to interface them into a network. It is very likely that at some point HPANWO will have to find a new home; and indeed I've already taken steps to ensure that normal service will be maintained should that happen. If for any reason you come to this Blogger page and find that I have been deleted, you will be able to catch up with me elsewhere, see: https://hpanwo-tv.blogspot.com/2018/03/bitchute-project.html.
See here for background: https://hpanwo-tv.blogspot.com/2018/07/q-anon-livestream.html.
And: https://hpanwo-tv.blogspot.com/2018/08/alex-jones-banned.html.
And: https://hpanwo-tv.blogspot.com/2018/08/stefan-molyneux-almost-banned.html.
And: https://hpanwo-voice.blogspot.com/2019/01/denying-2016.html.
Posted by Ben Emlyn-Jones at 15:17