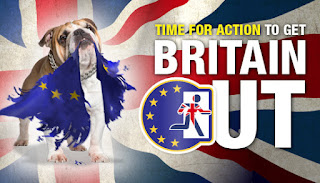 Happy British Independence Day 2018, the second one we have celebrated as we wait with baited breath for our independence to become actually real. I have completely lost track of the labyrinthine political processes going on in Parliament as we limp from one Commons defeat to another; back bench rebellions, House of Lords vetoes and deal-or-no-deal. It sounds like some kind of bad BBC light entertainment farce. Now several industries are jeopardized as a result; for instance Airbus is threatening to close its aviation plant in south . Today a demonstration of thousands in demanded a rescue package for this shambolic situation, see: https://www.bbc.co.uk/news/uk-politics-44586638. Of course, as I've said before, the chaos is not just accidental ineptitude; it is deliberate sabotage. This is the nation that built a hundred and fifty Spitfires in four weeks; does anybody really believe we could not sort out our own future sovereignty with a continent we've been trading with since prehistoric times? The good news is that the dictatorial foreign occupier so beloved of Remoaners has entered its worst ever crisis. is not the only country rebelling; , and many states in are on the brink of insurrection. By the time the Brexit deadline arrives next March there will hopefully be nothing left to leave.
See here for background: http://hpanwo-tv.blogspot.com/2016/06/vote-leave-2-count.html.
And: http://hpanwo-tv.blogspot.com/2016/06/brexit-reality.html.
And: http://hpanwo-tv.blogspot.com/2016/04/david-camerons-leaflet.html.
And: http://hpanwo-voice.blogspot.com/2017/03/article-50-at-last.html.
And: http://hpanwo-tv.blogspot.com/2017/03/richard-dawkins-patronizing-git.html.
Posted by Ben Emlyn-Jones at 15:55

It's been staged managed from the get go, the only sanity in it all is recognising it was planned this way from the get go, it's the only way it makes sense. I still think it's most likely a phoney bone of contention, but the true aganda won't be known for some years.

I've found Richard North @ eureferendum.com to be one of the few researchers who can make sense of the nonsense, tho he doesn't seem to be 'awake' in the sense alt researchers understand that term, he does have a handle on it all you won't see in the mainstream.

Hi Anon. I think not. The entire bulk of mainstream media propaganda was against Brexit. If this was some kind of 4-D chess they were playing then it appears to move in a full circle and serves no purpose. It also goes against their entire strategy for over eighty years. The Stalin model of a two-stage establishment of world government. There is far more in the background links.

Dear Ben, I enjoy HPANWO but I need to ask you something. How come you haven't made any comment on Trump's policy of removing immigrant children from their parents then u-turning on this atrocious piece of behaviour? Surely you can't defend him in this matter because I know how much you admire him?

Trotsky believed in the "world revolution" though Stalin famously believed in communism in one state though granted he annexed some countries. He shot all of the old world revolutionaries. He got rid of the Comintern and so I don't think we can say that Stalin was planning a world government. Sounds like groundless Mccarthyism to me to be honest.

There was a 'NWO' world map floating about around 2004-6 with coloured areas for different zones, I looked for it, but it seems to have disapeared off the web nowadays, I remember it showed wales and scotland in a different zone to the rest of the UK which iirc was lumped in with some scandanavian countries (norway option?) which it's self was in a different zone from most of EU.

How did the momentum for a referendum get started? we can go back to 2011 when John Baron, the Tory MP, rounded up 100 colleagues and 61 tories to sign a letter calling for a referendum in 2012 - the same John Bardon who was a merchant banker for Rothschild Asset Management. Nigel Farage, city of London stalwart... etc.

I dunno, I wouldn't put anything past them, agree MSM was decidedly remain, but the alt, or rather establishment alt media, carried it with their brexit stance. If we look at the rise of 'populism' most of the shining lights can be linked to elite circles, appealing to populist mindsets is a trick almost as old as bread and circuses.

I disagree (if it is manufactured) it serves no purpose, with some lateral thinking it could serve an awful lot of purposes, scape goeat for financial woe being top of the list.

We shall have to wait and see, popcorn futures are the best bet ;)

Anon, Ian R Crane still has the map. It is real. He shows it at some of his talks.

Kathy. I have commented in detail on that subject. Please go to HPANWO Radio, link in the column, and listen to Prog 37 of Third Rail Radio.