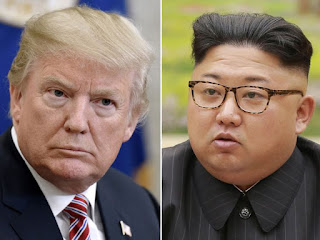 Kim Jong Un, the "great leader" or "dear leader"... or "something else leader" of the Democratic People's Republic of Korea, also known as North Korea, one of the last hard-line Marxist states in the world, has been the subject of much geopolitical controversy in the last few years; see background links for more information. This centres around his country's sophisticated nuclear weapons programme. He has detonated many A-bombs and even a few hydrogen bombs in tests; and he is also developing long range ballistic missiles to deliver them. From his own point of view this makes perfect sense. His nation is isolated and loathed by almost the entire world. is the closest thing it has to an ally, but in truth barely tolerates the upstart little state on its Manchurian border. Kim feared invasion from all sides, yet his nuclear deterrent has made his country far more secure. A military invasion and forced regime change in the DPRK is no longer an option because the consequences would be so horrific. In such a situation Kim would definitely launch his missiles against the big cities of and killing millions. He might even be able to hit a target in the western . A few months ago there was possibly and attempt to frame with a false flag nuclear attack, see: http://hpanwo-tv.blogspot.co.uk/2018/01/hawaiian-missile-alert-livestream.html. Since then the state of affairs calmed considerably; but now, in an unprecedented and totally unexpected development, Kim Jong Un has suggested a plan to denuclearize the whole of that would involve a cessation to his entire nuclear development programme. Source: http://www.bbc.co.uk/news/world-asia-44021305.

Kim has met with his opposite number in , Moon Jae-In. Kim is the first of the three DPRK leaders ever to set foot in its southern capitalist neighbour's territory. The meeting has led to a proposed further summit with the President Donald Trump, the man who previously called Kim "rocket boy". Trump has accepted the invitation. So far the prospects look rosy. The positive response is already showing effects. Every year the and carry out a joint exercise designed to intimidate called "Foul Eagle". It has gone ahead this year, but it was very much scaled down. We don't yet know the outcome of this upcoming Korean peace summit, but the situation is remarkably similar to the one engineered by Mikhail Gorbachev, the premier of the , in the 1980's. Gorbachev had multiple meetings with Western leaders, especially US President Ronald Reagan, and negotiated a vast reduction in the nuclear arms race that had been the centrepiece of the Cold War for forty years. He also sought to change the 's relationship with the global community; he called his new policies Glasnost- "openness" and Perestroika- "restructuring". His hope was to transform the into a different kind of country. It didn't work... or worked too well, depending on your point of view; and the entire Soviet socialist system imploded. In December of 1991 it was disbanded and the modern was founded. Is Kim Jong Un about to try the same thing? It must be tempting. His little socialist state has suffered terribly since its beginnings in 1945. It has experienced economic stagnation, dysfunctional government and constant bickering with the international community. Millions of people have died in a string of famines. As the expert Michael Malice says, Kim has had enough of the stick; now he wants to try the carrot, see: https://www.youtube.com/watch?v=_Fb2infH3PE. (This programme is also interesting: https://redice.tv/red-ice-radio/the-korean-peace-summit-does-trump-deserve-credit) We'll have to wait and see. The summit with and the will take place within a few weeks, probably in . I will report on it further when it happens.
See here for background: http://hpanwo-voice.blogspot.co.uk/2009/05/north-korea-tests-nuke.html.
And: http://hpanwo-voice.blogspot.co.uk/2013/04/maggie-and-kim_20.html.
And: http://hpanwo-voice.blogspot.co.uk/2010/11/north-korea-is-very-bad-indeed.html.
And: http://hpanwo-radio.blogspot.co.uk/2013/04/cmr-listener-in-north-korea.html.
Posted by Ben Emlyn-Jones at 17:15

Hi Ben, yes I must admit I didn't know that there was a North Korea anymore. I thought that finished years ago. I do think marxism should be brutally destroyed wherever it remains however. We must close our hearts to pity and hope that Trump can provide the lasting solution to this evil creed of mind control. Regards, Tom

Hi Tom, You can't have watched much news lately! We'll see what happens.

Hi Ben. Thank you so much for replying to me. Believe it or not I was a Benedictine monk until two years ago (I'm 64 now). I do not own a TV set and only recently learnt about computers. I'm still devout. Perhaps a militant Christian you might say. I have spent time in Nepal which is one reason I hate communism so much. I thank the Lord for Donald Trump. I think he is doing the work of our Lord. I would love to attend one of your talks whereby you passionately attack marxism and uphold gnostic Christianity. I shall pray for you my son. Peace and love. Thomas

Hi Ben my name is Zack and I have a question for you. I read your blogs and I wish we were friends but I live in Thurso so that could be tricky. Anyway, we are one heartbeat away from Mike Pence being the POTUS. I value your opinion over everyone else; what do you think of Mike Pence? Heis nicely religious which helps. Although I hope nothing happens to Trump but I think the VPOTUS would do a fine job if he had to. What do you think of that?

Hi Ben, love all your stuff, books, talked, radio show and MCing, you do it with a charming confident smile. But...70 more episodes, it's official, 70 more episodes of Ricky and Morty are to be made. The best thing on telly at present, well Netflix. I hope you one day learn how to enjoy some Rick and og Geez I don't know, iiis't . Any way you get the point. Rick and Morty rule for 70 more epidsode..

I've not seen it, believe it or not... I've never even watched Game of Thrones!