Merry Christmas from the Remoaners 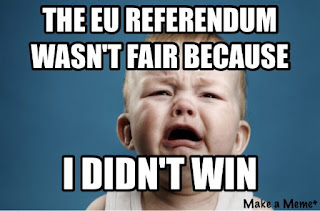 As I write these words I'm getting ready to go to a Christmas party hosted by a friend of my father's who is also his former boss. Since my dad retired a few years ago they have stayed in touch. This man, I'll call him "Gerald", is also one of 's most hardline remoaners. He has even written articles for the local press saying that the should simply stay in the European Union... so there! I detail in the background articles below exactly what I think of that attitude. Don't worry; I won't be arrested for murder at the party. I'll be perfectly civil to Gerald (somehow that sounds a good name for a remoaner) and will not get into an argument with him. In fact unless he asks me for my opinion I won't even give it. The fact that I do not know him on Facebook makes me doubly sure we will not fall out.

I cannot make that same promise for others however. Luckily they live out of my way, north of the border. The Scottish Court of Sessions, the equivalent of and ' High Court of Justice, is to hear a case that might allow the to abort the Article 50 process without permission from the European Commission. The case was brought by a group of seven pro-EU politicians from four different parties. I'm sorry to say that the lawsuit has been easily crowdfunded. This less-than-magnificent seven are: Christine Jardine, a Liberal Democrat Westminster MP for an constituency. Joanna Cherry, also a member of the House of Commons, for the Scottish National Party. David Martin, a Labour member of the European Parliament. Catherine Stihler, another Scottish Labour MEP. Andy Wightman, a member of the Scottish Parliament for the Green Party. Ross Greer (No relation to Dr Steven), another Green MEP. And Alyn Smith, who sits at for the SNP. The case is based on the definition of Article 50 and who has jurisdiction over its process. We must take into account that this is uncharted legal territory. Brexit is only the second occasion the article has ever been invoked and that the previous time it was for ; which is in , only has a population of fifty thousand people and is a colony of . If the case in is successful then it will be referred to the European Court of Justice in and this could possibly amend Article 50 allowing the to reverse the process and retain its position as an EU member state. Source: https://www.msn.com/en-gb/news/uknews/legal-action-over-whether-the-uk-can-reverse-brexit-gets-go-ahead/ar-BBHabhq?li=BBoPWjQ. I urge all the constituents of the above representatives to oust them at the first opportunity. Vote for the Raving Loonies if you have to! Just kick their arrogant, dictatorial bottoms out into the street at the next election. These bureaucrats have once again displayed their contempt for the British people, something that they have always felt but used to hide. As I predicted, the Leave referendum of June 2016 is being portrayed in retrospect as nothing more than an interim opinion poll. One of the reasons I am covering this subject on HPANWO Voice, HPANWO Radio and HPANWO TV is to prevent people like these throwing the truth about the referendum down the Memory Hole. The battle is far from over. We will not be able to relax until we are literally out of the EU in every way. The moment we let our guard down, the remoaners always pounce!
See here for background: http://hpanwo-voice.blogspot.co.uk/2016/06/brexit-backlash-begins.html.
And: http://hpanwo-tv.blogspot.co.uk/2017/03/richard-dawkins-patronizing-git.html.
And: http://hpanwo-voice.blogspot.co.uk/2017/03/article-50-at-last.html.
And: http://hpanwo-voice.blogspot.co.uk/2017/05/lib-dems-instruments-of-treason.html.
And: http://hpanwo-voice.blogspot.co.uk/2016/09/brexit-awaits.html.
Posted by Ben Emlyn-Jones at 16:24