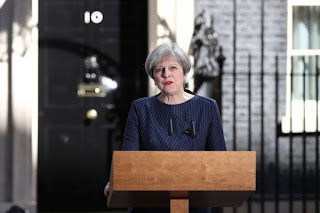 The Prime Minister Theresa May announced yesterday that she was calling for a snap general election. Modern political terminology often sounds juvenile and playful, as if it were some kind of children's card game. Like the card game, it is repetitive and predictable. Even though this is a major U-turn by the Prime Minister; or perhaps especially so. She gave a brief speech outside Number Ten in front of the world's press, see: https://www.youtube.com/watch?v=d12hAkkRGV4. As with Cameron and the EU, she has not given much notice; just over six weeks. Despite all her flannel, even her admirable acceptance of Brexit and her due diligence at triggering Article 50 while ignoring the Remoaner saboteurs, I suspect her real reason for calling this general election is to authenticate her own leadership. She is an unelected head of government; put into office by her own party after Cameron resigned and not the British people. Also she wants to strike while her enemy is down. The Conservatives' principle rival is the Labour Party and has been for the last century. At the moment Labour is in disarray, catastrophically split and reeling from two major internal battles within the last year. It currently trails in the polls by twenty-one points, almost half as popular as the Tories (then again, the polls have been so wrong before!), see background links for details. She believes she can easily win a general election right now and wants to get one in before Labour can recover. Unlike in the where there is a strict time schedule and succession procedure, see: http://hpanwo-voice.blogspot.co.uk/2017/01/coronation-of-god-emperor.html, general elections can happen at any time and governments can hold as many as they like; however there must be a maximum of one every five years. However, May needed a two-thirds majority in the House of Commons to bring the next expected one in 2020 forward to this summer. This was achieved today, see: http://www.bbc.co.uk/news/live/uk-39628713.

The Sewerage Junction at Dunstable said...

Why do you bother to write these articles? What can one gleam from this shitty heap of pointless we all ready know thacts? You treat your fellow man as if he had spent the last 30 years buried under a huge steaming pile of Polar Bear shit.

I suppose you just have to blog regardless of what you have to say being meaningless. You have only paraphrased the DM Online as it is. Be original for once or stick with you yogurt mixing instead of insulting humanity with this bilge.

Blimey " I suspect her real reason for calling this general election is to authenticate her own leadership." I must agree with the previous commentator as you really do state the bleeding obvious. It's been some time since I last had my intelligence insulted as I have reading this. It would insult many 8 year olds I'm sure!

Hi Ben, I note you didn't publish my comment before. You talk about tyranny of the NWO and lack of disclosure etc but arnt you just as bad with HPANWO? I can repost the comment if you like mate

Really good bit of blogging their, Geez. I reckon you should become a journalist if you are not already a journalist. Try getting in with local newspapers that are local. That was where Icke started.

I think your writing will take you a long way.

Take note, people. This is an exercise in what hard work and dedication can bring you; excellent blogs of the highest quality.

Enjoyed that. Thank you. Very nice.

That was really good Ben. Top posting pal. Your right theres a hidden government but the sheaple are made to think there in charge but they arnt. Tory and labour are really the same party I reckan. They run things together but theres a secret government in charge. Anyway mate keep up the gud work pal

Thanks, guys. Glad you enjoy HPANWO :-)

Ben why are you praising yourself and reviewing your own blog?

For the same reason I do on the forum, Beetz ;-)

That wasn't me, Ben.

Hi Ben mate me again from before I was the one talking about your secret government ideas. Just wanna know what you reckan of Jeremy Corbin. A mate Down the pub is gonna vote for him but I reckon hed sell us down the river and make us join the EU again. As you say Ben the EU is a stepping stone to world government. I'd rather vote tory me to be honest but there just as bad in other ways but at least there British. I thought about joining BNP once but am not a racist. Anyway cheers again Ben mate and look forward to the next one mate. Barry.

Are you able to give guidance? Religious guidance. The catholic way. I believe that religion is strongly linked to UFOs and with faith in God we can solve these mysteries for good.

I have been keenly following your work for a while now and I am impressed. You deserve more recognition though. Have you thought about combining your work with your lapsed faith? BTW, I have managed to get hold of Moon Dangle Candles from a shop (online) in Chippenham. They smell lovely and the shop even gave me a free orgone necklace, for being a new customer, which I am wearing now and I can feel that my life has calmed down somewhat.

Anyway, thank you again and I am going to pray for you and wish you goodwill and safe passage wherever you tread.

Pious Ken but my real name is Justin Smashnasty