Is Ken Livingstone a Nazi? 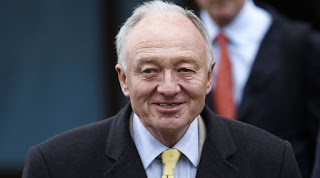 "Red Ken" Livingstone is a Labour politician from another era. At the age of seventy he is still a vocal and stalwart democratic socialist. With his cool-headed manner and rather autistic attitude to his peer group credibility, he is constantly clinging on to the peripheries of the Blairite "New Labour" roundabout. He has come within a hair's breadth of expulsion several times and even became 's first mayor in 2000 as an independent candidate when his party turned him down. When his friend and fellow leftist Jeremy Corbyn became Labour leader last year, see: http://hpanwo-voice.blogspot.co.uk/2015/09/the-corbinator-wins.html, Livingstone must have thought all his troubles were over, but it seems he was wrong. In last year's general election the Blairite Labour tendency supported a Muslim woman called Naz Shah who stood for the party against the Respect MP George Galloway in the Bradford West constituency. fought a very dirty personal campaign against Naz Shah and I don't think he deserved to beat her; therefore I was quite pleased when Ms Shah won and became the new MP. The British Labour neoconservatives were over the moon for other reasons... How quickly allegiances change in politics. really is at war with Eastasia. Naz Shah is now the bete noire of those same neocons because it's been revealed she made supposedly anti-Semitic remarks on social media in August 2014; this was long before she became a member of parliament. She reTweeted a satirical joke that suggested be relocated to and made an enclave within the . She also compared to Nazi Germany. As a result she was immediately suspended from the Labour Party and could end up being expelled even though she profusely apologizes.

I think I feel so strongly about this because I myself have recently been accused of anti-Semitism, falsely I have no doubt, see: http://hpanwo-radio.blogspot.co.uk/2016/05/programme-188-podcast-jews.html and: http://hpanwo-voice.blogspot.co.uk/2016/04/is-ben-emlyn-jones-anti-semitic.html. The words "anti-Semitism" and "anti-Semitic" are used so casually nowadays that they've lost their original meaning. They're tossed around like sweeties to the point where few people understand them. The effect is that hardly anybody recognizes real anti-Semitism when they see it. For example in there are no synagogues by order and to posses copies of the Talmud or Torah can result in severe punishment, up to and including execution. At a speech in the Grand Mosque of Mecca, the imam Abdul Rahman Al-Sudais, referred to Jews as: "The scum of the human race... offspring of apes and pigs... The worst of the enemies of Islam... Worshippers of false Gods..." Yes, this is the same that is 's best friend in the , that sells us oil and hosts our military bases and did so through a number of previous Labour governments... Yes, but Naz Shah is an anti-Semite! It got even more ridiculous when Ken Livingstone stood up as one of Ms Shah's most vociferous defenders. He related on a radio show information written in the book Zionism in the Age of the Dictators by the Marxist historian Lenni Brenner which asserts that the Zionist lobby, following the Balfour Declaration of 1926, approached Adolf Hitler and tried to negotiate the emigration of all the Jews from to . I don't know whether or not that is correct, but the point is that Ken Livingstone is saying that to oppose is not the same thing as hating Jews. He then said, correctly I think, that: "there is a well-orchestrated campaign by the lobby to smear anybody who criticises Israeli policy as anti-Semitic." He got into a heated row on the Daily Politics show with a fellow Labour MP, John Mann. This carried on outside the studio as a furious Mann chased Livingstone along the corridors shouting that his opponent was a "Nazi apologist!" Livingstone was suspended by the Labour Party's national executive committee. There followed some extremely poor quality TV interviews with Livingstone; this one is probably the worst: https://www.youtube.com/watch?v=PrBQMJEObR8. The programme is presented by the BBC's Big King Jock of propaganda, Andrew Neil. During this "discussion" Neil interrupts Livingstone continuously, hardly letting him complete a sentence; and replies in a manner specifically distorting what Livingstone previously said. Somebody less experienced and sanguine would surely have cracked under this strain. Both Neil and his co-host also deliberately twist the meaning of a tableau that Naz Shah posted showing Martin Luther King in a police mug-shot and the caption: Never forget that everything Hitler did in was legal, see: http://order-order.com/2016/04/26/naz-shah-compared-israelis-to-hitler/. The point of this meme is that to resist evil it is sometimes necessary to break the law, if the law supports that evil. Yet the BBC specifically misled the viewers over its meaning in order to demonize Ms Shah. Andrew Neil says he's never before heard a Labour MP call one of his right honourable friends a "Nazi apologist", in a tone that leaves no doubt Ken Livingstone is to blame for that and not John Mann. Neil then brings in fellow guest Nick Clegg, leader of the Liberal Democrats and former deputy Prime Minister to David Cameron, who says absolutely nothing rational about the matter at all. He just delivers some typically creative parliamentary rhetoric. Neil only interrupts him once. Then on comes John Mann via video link, red-faced and foaming at the mouth. He is allowed two completely uninterrupted and uncriticized monologues. I'm not a supporter of Ken Livingstone. He has made unacceptable moral compromises in my view and is too busy running with the fox at the same time as chasing with the hounds, but is he an anti-Semite? Is he a Nazi? No, of course not. He and Naz Shah are merely the central fall-guys of this whole farce that is attempt to make the viewing public see British foreign policy through a warped lens so they can be led up the garden path into future wars yet again. I'm pleased to see that Ken Livingstone, at the time of writing, is refusing to apologize for his remarks.
See here for this episode of the Mind Set Podcast where we discuss this subject: http://hpanwo-radio.blogspot.co.uk/2016/05/ben-emlyn-jones-on-mind-set-podcast-121.html
See here for background: http://hpanwo-voice.blogspot.co.uk/2009/01/genocide-in-gaza.html.
And: http://hpanwo-voice.blogspot.co.uk/2015/03/david-icke-loses-lawsuit.html.
And: http://hpanwo-voice.blogspot.co.uk/2013/07/the-secret-life-of-uri-geller.html.
And: http://hpanwo-voice.blogspot.co.uk/2015/04/english-defence-league-in-oxford.html.
Posted by Ben Emlyn-Jones at 18:50

Cultural Marxism & Death By Demonization. We are not allowed to question the 'Untouchable' subjects which actually annuls both the victims & the chance for analysis/dialogue, the latter being the only way to bring real accord. It is also a definite ploy to undermine Corbyn, though I'm not convinced by him anyway.

Neil, I feel more respect for KL based on that. He's not a fence-sitter if he's tackling the child abuse issue. Either way, he certainly has been treated very shabbily by the media and political authorities. X, the Zionist issue seems to have been engrained to trigger the emotional reaction we saw in Clegg and Mann during that ridiculous interview. It was a "car crash" alright, but not for Ken Livingstone

So we can safely say that Ken L has been
1. prepared to demonstrate publicly the distinction between political Zionism and Judaism
2. prepared to state the clear evidence linking British Security Services and paedophile rings https://www.youtube.com/watch?v=dU4wfVI7LNc
That's 2 ticks for Ken L in my book

Yes, Neil. Maybe I was too hard on him