My Trip to the Dentist 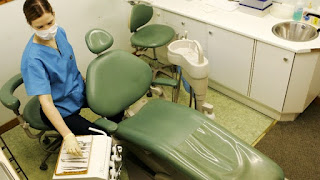 One thing I've always disliked intensely is going to the dentist, in other words I'm what is known as an odontophobe. The very smell of dentists' chemicals or the sight and noise of their tools sets my teeth on edge... literally. Therefore I've not attended my regular checkups since I grew up. I've also been motivated by finance. Despite Nye Bevan's commitment to free healthcare for all, at the time of writing the best price in Oxford for a quick glance in the mouth is eighteen pounds; and when you're on a hospital porter's wage it's near the bottom of the priorities list, especially when you have a family to support. My last visit to the dentist was about twenty years ago to replace a filling that had fallen out of a tooth that had first been filled when I was about thirteen years old. Interestingly all my tooth cavities date from before my sixteenth birthday; probably because that was about the age I stopped eating sweets. Anyway, a few years ago that second filling came out. This didn't cause me any pain so I left it. However a few weeks ago I bit on it and caused a severe shooting pain in my mouth. This passed, but four days ago it began to hurt again; this time spontaneously. I was leaving for the Probe conference at the time so I just crossed my fingers and hoped for the best. Luckily, the pain wasn't too bad during the event and didn't spoil my enjoyment of it. It began to get worse on the coach home. Toothache is something I've not experienced since I was a child, but I know that at its worst it can be agony. I knew I had no choice but to call the emergency dental helpline at NHS Direct. I also bought a packet of paracetamol tablets to help me sleep that night.

I managed to get an appointment this morning and made my way to the clinic in dread. I chided myself as a coward. I thought of all the patients I'd seen during my years in hospital portering and the terrible states some of them were in, images I will not even describe. "You've just got a bad tooth. Grow some balls, Pussy!" I self-scolded. The receptionist was the very caricature of a medical clerk; she brusquely handed me a form to fill in. This asked me to select my "racial and ethnic background". I've always refused to answer these sections due to the way the data us used by Common Purpose and other fifth column mind control organizations. This form included the option: "Patient declines to state" which I ticked. They must have had a lot of people rebelling against it; good. I sat in the waiting room, deliberately averting my eyes from the posters informing everybody that their doom was near because they weigh more than an Olympic gymnast. When my name was called I put my best foot forward and headed in to get it over with. As the Japanese say: shikata ga nai- "There is no other choice." The dentist was a young Chinese woman who spoke perfect English. She was as small as a doll and had to adjust the height of the couch so she could look into my mouth. She took an X-ray and showed the print to me. The third degree for which I'd been given the first filling was on the border of being unsuitable for re-filling and needing root canal therapy, an entirely different and much more complex procedure. She offered to fill it, but warned me that this might well not work. I asked her about mercury in fillings, something that is of concern for me, see: https://www.youtube.com/watch?v=xmYFDkIa6kw. She said that mercury amalgam was harmless; and anyway they didn't use them at that practice anymore. I asked if she would do a root canal job on me now and she said no. This was not available for an emergency patient. If I choose to have a root canal I would need to go home for a couple of weeks and wait for an appointment. That's a couple of weeks of living with toothache; and then I'd have to pay for the treatment, probably a three-figure fee. Therefore I chose the only other option: extraction.

All my adult dental problems, bar none, have been caused by that one tooth; all the others have been fine. So I simply told her to pull it. I won't miss it; in fact good riddance to it. It won't effect my lifestyle; I can still eat normally and my speech is not impeded. It is a molar and so is not visible when I smile. The extraction process was simple. I was given five injections in my gums to numb the entire right side of my jaw then the dentist and her dental nurse used some special pliers to wrench my tooth out. Despite her small stature, she achieved this in a few minutes; although she needed help from the nurse. "You big guys always have strong teeth!" she told me. There was an alarming crack and the tooth split, forcing her to pull out both parts separately. I felt no pain at all, just the pressure as she rocked the tooth back and forth to loosen it. It bled quite heavily and I had to bite on a roll of gauze to stop it. I now have a large gap with a blood-stained open socket in my gum. I was told this will heal over in a few days, but it's quite sore right now because the local anaesthetic has worn off. I might still need the painkillers to sleep and also when talking for long periods. I have to do HPANWO Radio on Thursday, see links column, and speak at the UFO Truth conference on Saturday, see: http://hpanwo-voice.blogspot.co.uk/2016/02/ufo-truth-magazine-southern-uk.html. But at least the bloody toothache is gone! It's strange, but loosing just a single tooth has changed the balance of my mouth considerably and my teeth lock together differently; it will take a bit of getting used to. So I am now minus a tooth. If I were an alien living near Col. Charles Hall's Area 51 weather station he would call me "the Norwegian with twenty-three teeth".
Posted by Ben Emlyn-Jones at 17:55

dental amalgam is very harmful, there are plenty of holistic dentists these days who remove them and i needed to pay a grand to have mine replaced. root canals are also linked to major health issues, but i don't think removing the tooth will solve this dude, the nerve is still there and will rot eventually. make some bone broth from organic chicken bones after a roast, they don't want you to know you can heal and remineralise your teeth.

Thanks for the tip, Kyle. I don't eat organic roasts, but I know a few people who do. I'll ask them not to throw out the bones

Ben, why didn't you let me know??! Seriously, dude!... Glad you got sorted though

Ben, I had an almost identical experience 2 yrs ago and opted for the extraction as well. Root canals have long-term health risks they don't tell you about. You can find info online about it. Never get a root canal! You'll be a bit hyper-aware of the change but soon you won't notice it anymore at all. :)
~Sandy

Hi Sandy. Thanks for the info. Funnily enough Ustane said the exact same thing to me when I phoned and gave her the news. She had just been reading up on the risks of root canal therapy. It's good that plenty of people can access the alternative side of things.

I think I would have chosen to remove the tooth as well. Since it was a back molar, it would not affect the look of your smile or face. It also could be done right then and there. Glad to hear your pain is gone, and I hope getting rid of the tooth solves all your tooth issues.