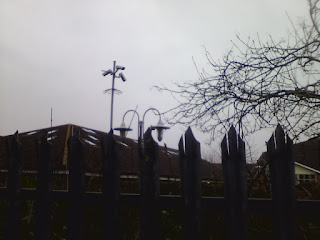 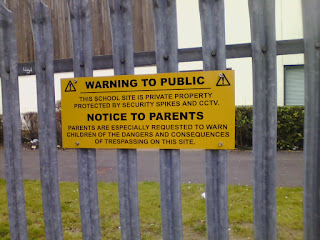 I was walking along an alleyway that led down the side of St Gregory the Great School in Oxford, see: http://stgregory.oxon.sch.uk/, when I saw some things that made me decide on impulse to take a couple of photographs; the ones above. As you can see, there are CCTV cameras mounted on a mast and a high barb-topped fence surrounding the site. I thought to myself that it doesn't look like a school; it looks like a concentration camp. When I was at school... which wasn't that long ago... I would simply not have recognized this building as a school at all; so much has changed in just a few years. No doubt the school authorities would say that this is all intended to keep the children safe from strangers who might intend them harm. Indeed, they are very concerned about that. A few months ago at the primary school playground, some young children behind the fence stopped me as I was walking past and we had a conversation. The dinner lady came over and said: "Come away from that fence now!" and gave me a suspicious look, as if she was concerned I were a paedophile. I was hoping she'd challenge me so that I could reply: "Don't tell me who I can and can't talk to on a public highway!" etc, but she didn't. At another part of the fence-line where there are no bushes and trees, they have since installed a blackout screen over the metal bars to prevent people in the alleyway seeing into the playground. I believe that the school would never allow any harm to come to their children; the only adults who are allowed access to the pupils are respectable public figures like Jimmy Savile and Rolf Harris. Regular HPANWO readers will recall that St Gregory the Great was my daughter's school and I caused a bit of a ruckus when they tried to take her fingerprints without telling me, another common practice at prison camps, see: http://hpanwo-radio.blogspot.co.uk/2015/12/programme-165-podcast-pippa-king.html. Luckily my daughter is now twenty-one and left school more than five years ago. She was very upset at the time, aged ten, over the public stance I made about fingerprinting issue and the way it was covered in the media; but as time has passed I think she understands why I did it.
(Apologies for not updating HPANWO Voice very often at the moment; it's because I'm still writing "that book!", see: http://hpanwo-tv.blogspot.co.uk/2016/02/roswell-rising-update-february-2016.html)
Posted by Ben Emlyn-Jones at 17:28

Start as they mean to go on, X

I'm seeing more and more of these kinds of prison camp style surroundings, particularly in schools, where there are often double gates and fences around a school together with more CCTV cameras installed around the place. Why aren't people complaining about this to their local authorities/council?; things like this should be a primary concern, but instead most people just moan and campaign about improvement of public services and things like that. You're damn right Ben about the right to be able to talk to someone within a public place without others thinking you could be a paedophile. The whole child abuse/paedophile scandals has been used to brainwash people. A agree that this is used to condition the very young into accepting that being in a prison-like environment with constant monitoring is the norm.