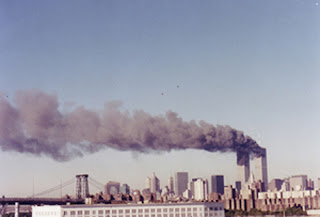 Today's 9/11 anniversary is not a decade or any other special milestone other than the annual one, the thirteenth following the actual 9/11 atrocity itself; however it feels special in some way. In terms of activism there's a lot going on this year; more than usual. In fact there was a big meeting in a while ago to make plans, see: http://hpanwo-voice.blogspot.co.uk/2015/06/911-truth-meeting-in-london.html. The "official" 9/11 Truth group in the has held a fringe event at a Stop the War conference yesterday. Tomorrow they'll be picketing and leafleting the BBC. They've called a public meeting in a few weeks which I'll be attending; should be interesting. There's also going to be the premier of a new 9/11 movie called Incontrovertible; it's produced by a company with the rather engaging name of "Killing Auntie Films"... I kid you not. The film features the story of Tony Rooke, a man who was taken to court for refusing to pay his TV licence as an act of rebellion against the BBC for lying over 9/11. So far the venue, date and time of the screening have not been announced, but I'll be sure to go and see it if I can. However I won't be attending any of the activism events because I don't feel comfortable getting involved with the "official" 9/11 Truth group any more. I used to; In fact I was once a member of the chapter of the group. Together with the group's leader, a somewhat dour and aloof man from out of town, we held a "week of action" two or three years after 9/11. This man was grudgingly accommodating with my involvement in the group because he didn't think "other conspiracy theories" should mix with the 9/11 issue. Since then I've come across more information relating to the 9/11 attacks which has made me understand that you simply cannot separate 9/11 from other esoteric matters. The definitive discoveries of Dr Judy Wood have proved beyond doubt that free energy, the secret space programme, and possibly even UFO's, are essential ingredients in any proper scientific 9/11 investigation. Yet the 9/11 Truth mainstream have failed to recognize Dr Wood's research for what it is, suspiciously so I think. Some of them have treated her with unequivocal hostility, for example see: https://www.youtube.com/watch?v=oAqbBWzRIAA. I have no intention of travelling all the way to to wave placards and yell slogans about "thermite!" and hijacked planes hitting the buildings. No aircraft or thermite were involved, see background links below. The UFO community have also been cynical, in fact Bryce Zabel, the screenwriter of the UFO-themed TV series Dark Skies and co-author with Richard Dolan of AD- After Disclosure, wrote an article called "UFO's and 9/11 Truth should not Mix". Recently I interviewed Stephen Bassett on HPANWO Radio and brought up the subject of the Rt. Hon. Paul Hellyer MP talking about Dr Judy Wood and he doesn't consider it as significant as I do, see here at 76:27: http://hpanwo-radio.blogspot.co.uk/2015/09/programme-153-podcast-stephen-bassett.html. (See here for details on Mr Hellyer's statement: http://hpanwo-voice.blogspot.co.uk/2015/07/hellyer-checks-evidence.html)

Four years ago was of course the first decade anniversary of the 9/11 attacks and to commemorate the passing of ten years the mainstream media produced an utterly dire documentary called 9/11 Conspiracy Road Trip, see: http://www.dailymotion.com/video/x2jlcfz. The programme featured Charlie Veitch, one of the Truth movement's most celebrated figures. During the course of the programme he changes his mind and decides that the official story was true. This was clearly an attempt to derail the 9/11 Truth campaign and it partially succeeded, I must say more from our reaction to Charlie's defection than his turnabout itself, see: http://hpanwo-voice.blogspot.co.uk/2011/09/911-conspiracy-road-trip.html. I'm still on good terms with Charlie. I think he's a fool and he made a huge mistake, but I don't think he deserved the threats to burn down his house and murder his son. I myself was asked to take part in the three-part follow up series to Trip... I declined. Since then things in some areas have been looking up. Dr Karen Douglas, a psychologist who studies conspiracy theorists has concluded that we are actually saner than the average Joe, see: http://hpanwo-voice.blogspot.co.uk/2014/10/conspiracy-theorists-more-sane-than.html. My own contribution to 9/11 Truth on this auspicious day was to distribute some fliers sent to me by my friend and fellow researcher Andrew Johnson, see: http://www.checktheevidence.com/pdf/911%20Photo%20leaflet%202014.pdf. (Also see link on main site) I went along a street putting them through people's letterboxes. Unlike the ones 9/11 Truth Official are using, this one includes the indispensable information gathered by Dr Judy Wood. Andrew sent me a sticker too; unfortunately I couldn't get the back off it, but I put it through somebody's door. The truth the Truth movement want has already been found. We know what happened. That has to be the first stage to find out who did it. How much longer will it take before the second question is answered? We shall see, and I shall persevere. Maybe we can then prevent similar crimes of mass murder in the future. On that subject, don't forget my 9/11 debate coming up soon: http://hpanwo-voice.blogspot.co.uk/2015/06/911-debate-ben-emlyn-jones-vs-andy.html.
See here for background: http://hpanwo-voice.blogspot.co.uk/2011/10/dr-judy-wood-in-brighton.html.
And: http://hpanwo-voice.blogspot.co.uk/2013/09/the-911-civil-war.html.
And: http://hpanwo.blogspot.co.uk/2015/04/richplanet-2015-tour.html.
Posted by Ben Emlyn-Jones at 18:24