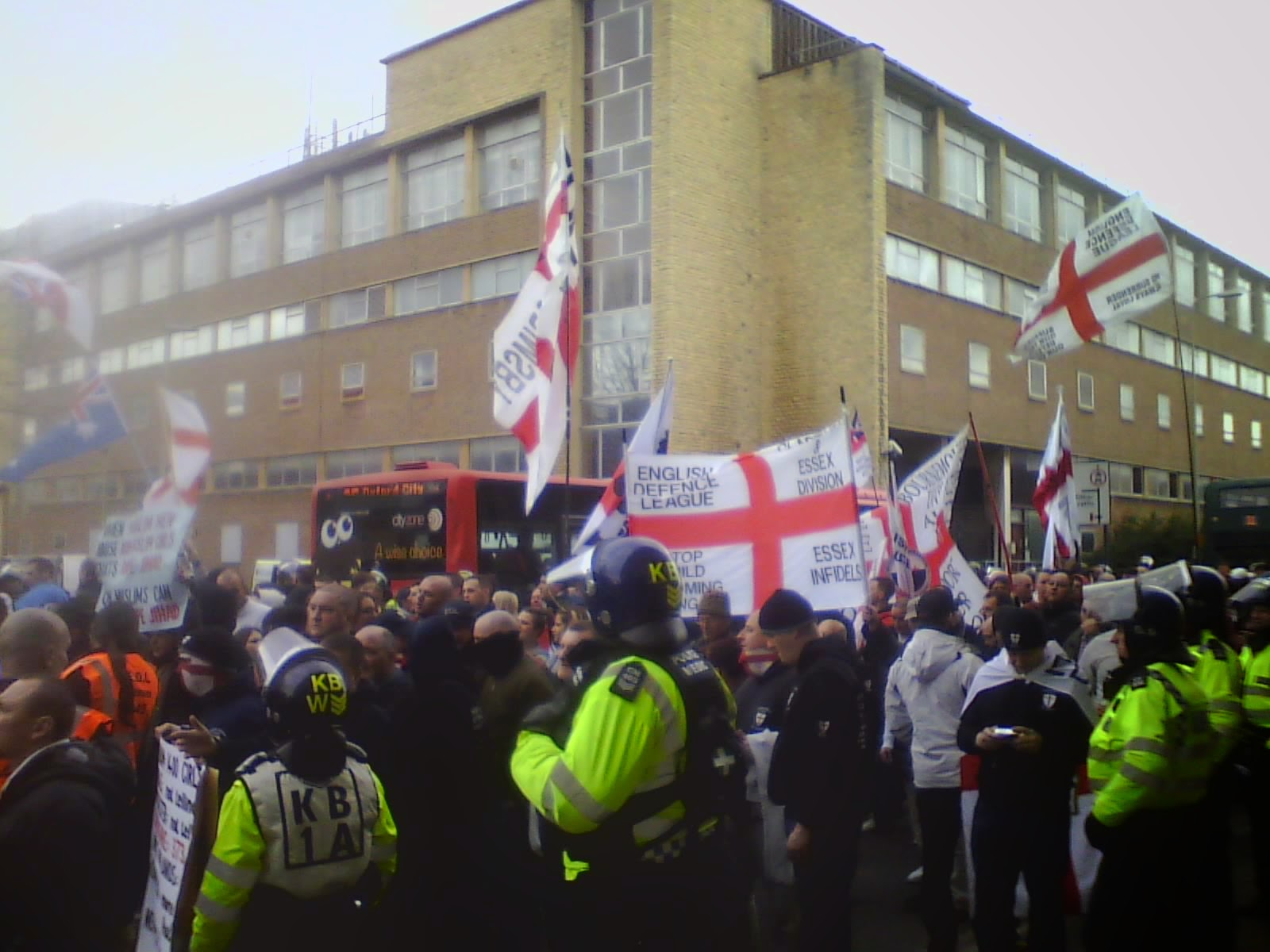 The English Defence League is a fairly new organization set up just six years ago in in a response to an incident in which a military street parade was heckled by a small group of people dressed in traditional Muslim garb hurling abuse at the marching troops. Since then the group has expanded into a nationwide movement geared towards stopping the rise of Islam in the . The EDL says that it's non-racist and doesn't consider itself a part of the far right; its membership includes black people, Jews and Asians of Hindu and Sikh backgrounds. It's become renowned for its noisy and disruptive street protests, and today it brought its presence to in response to the local Muslim grooming scandal, see background links at the bottom for details. The EDL were opposed by a counter protest organized by Unite Against Fascism, an umbrella front of Muslim pressure groups and leftists; it is also affiliated to the authorities and politicians, and senior figures in the trade unions are involved. Some local councillors have made statements supporting the UAF in their demonstration against the EDL. The UAF regard the EDL as a far right racist and "islamophobic" organization no matter what the EDL themselves profess. I received an invitation on Facebook to attend the UAF event and clicked "maybe" before looking at it more carefully. The person inviting me was a friend from the hospital who himself is involved with UNISON, our trade union. When I looked closer I changed my status to "not going". If you recall, I myself have been labelled a "fascist!"; I was reported to the Birmingham UAF for the talk I gave at BUFOG. A person wrote to the UAF to say that I was a racist, far right anti-Semite, see: http://hpanwo-tv.blogspot.co.uk/2014/05/ben-emlyn-jones-live-at-bufog.html. Luckily the UAF did not turn up and protest my event; this person has been leading a hate campaign against me for years and he tried to use the UAF as a lynch mob. These so called "anti-fascists" have targeted innocent people before, see: http://hpanwo-voice.blogspot.co.uk/2015/03/david-icke-loses-lawsuit.html. Are the EDL innocent? 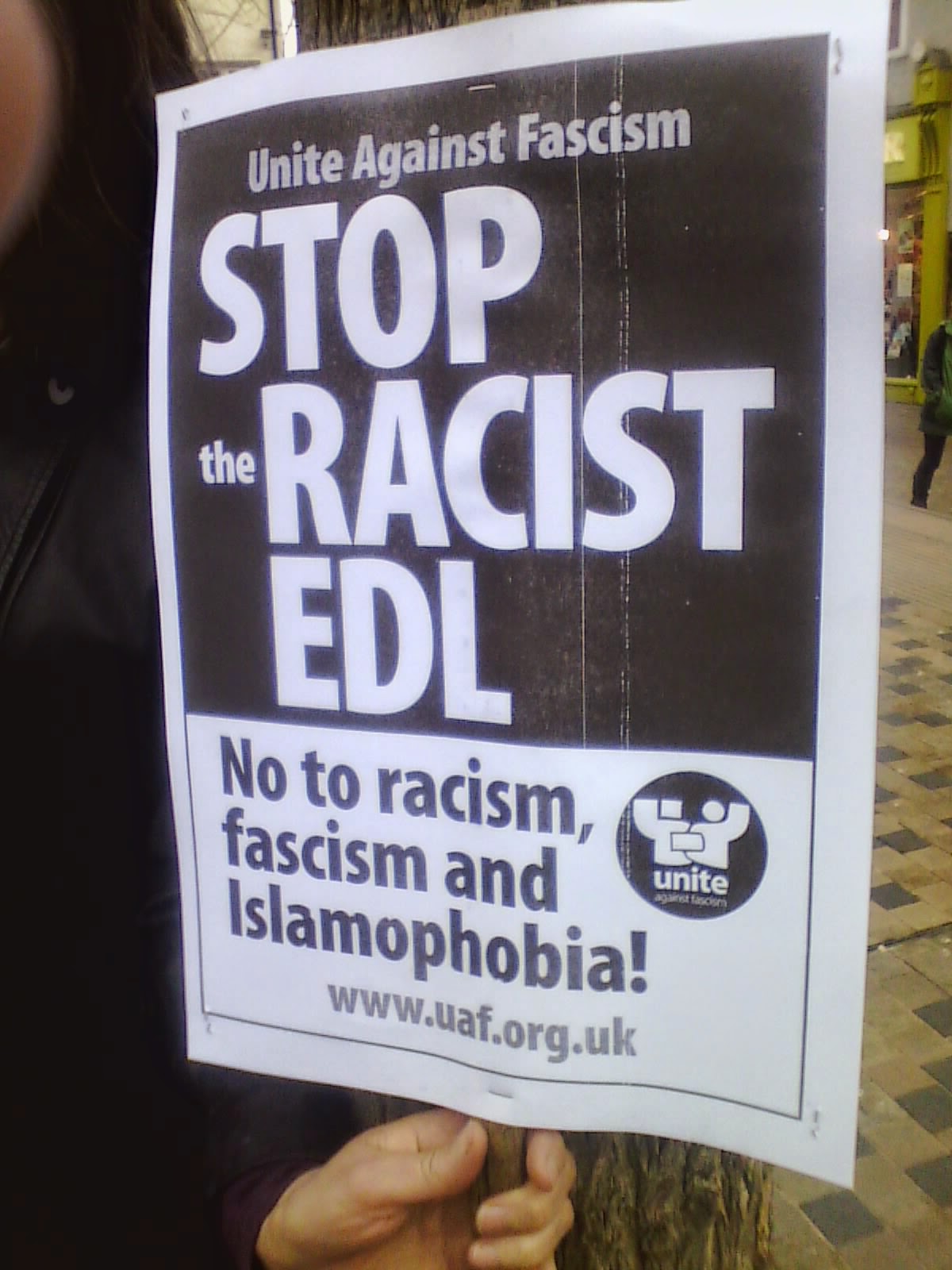 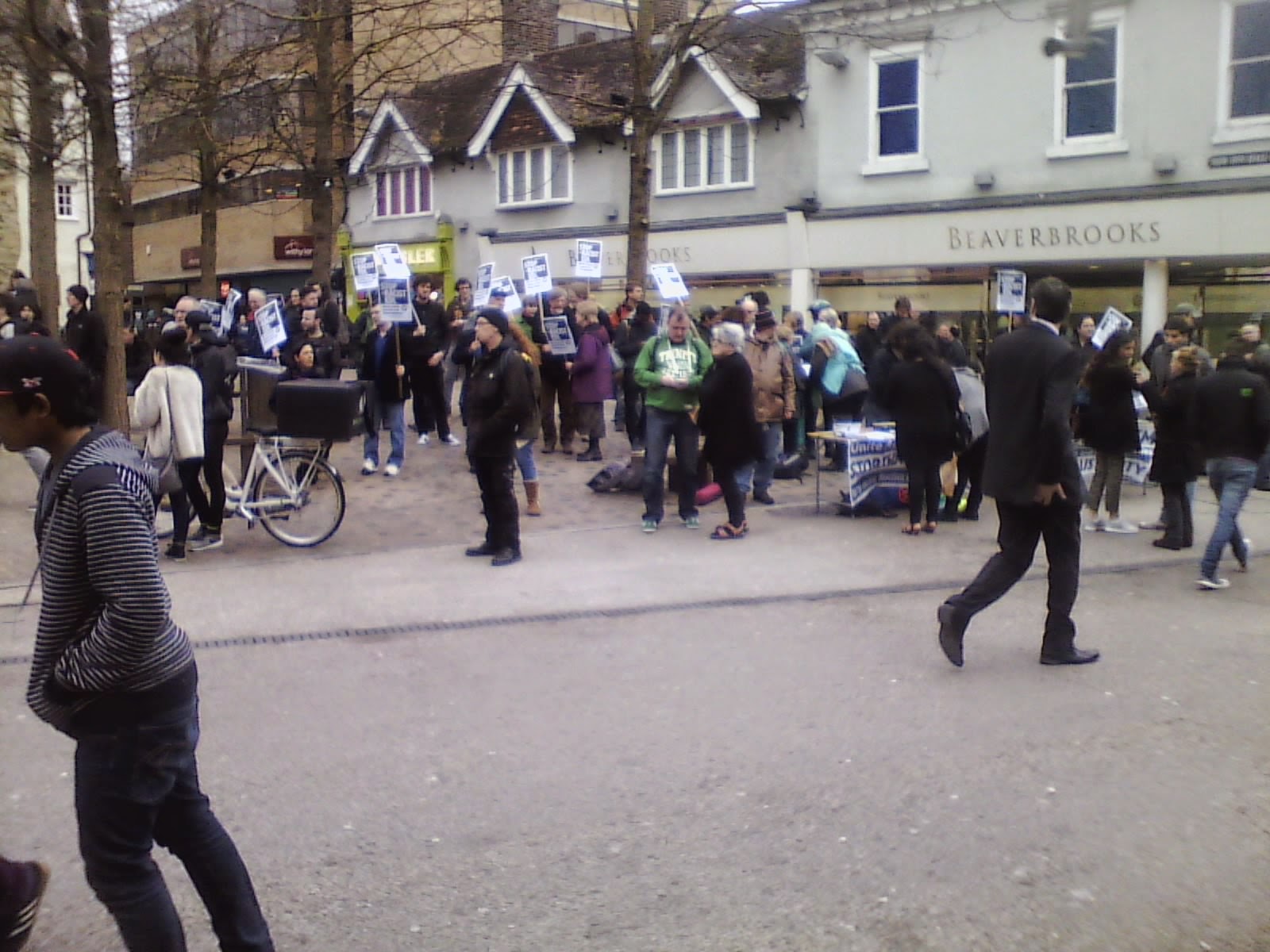 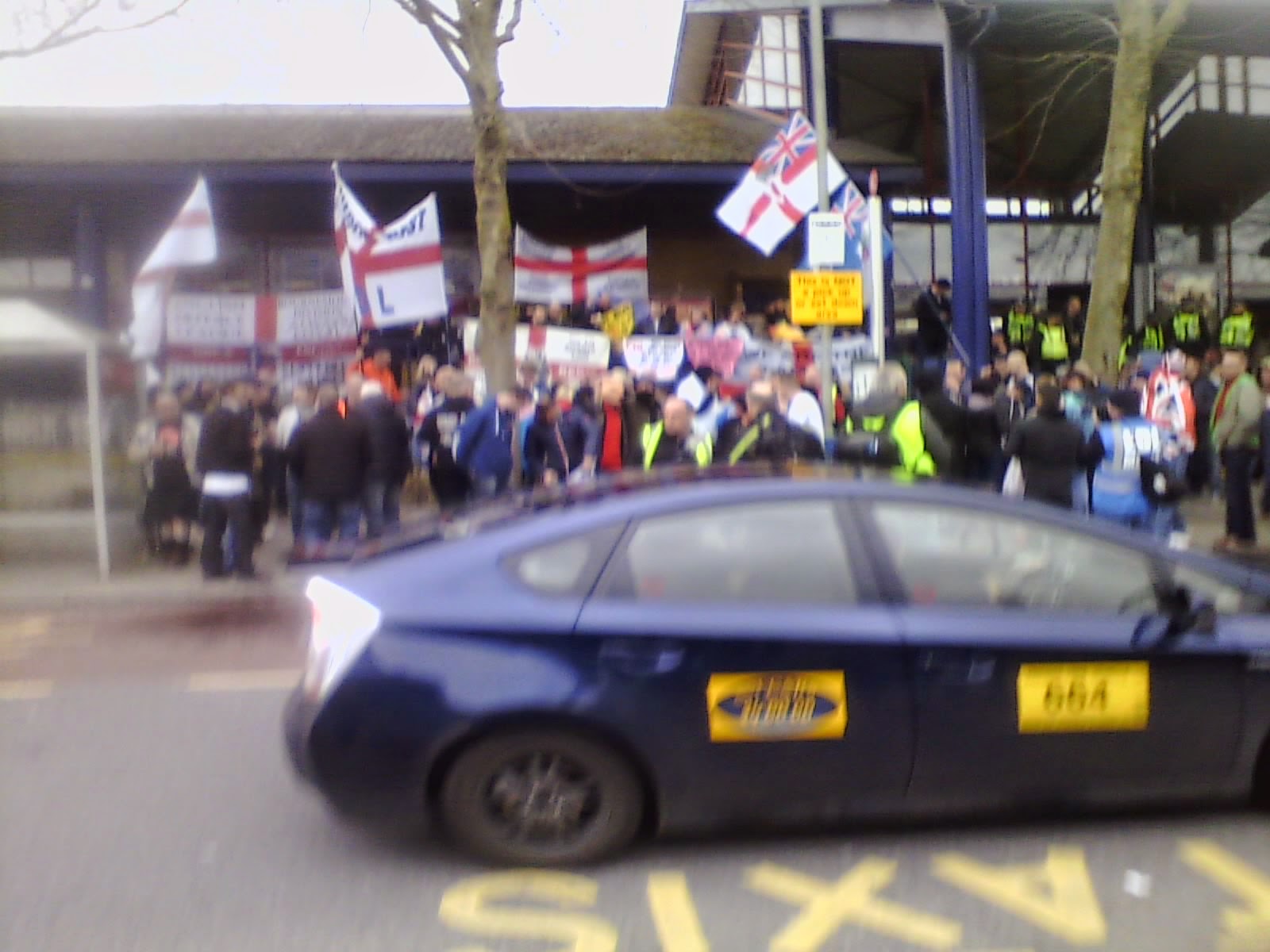 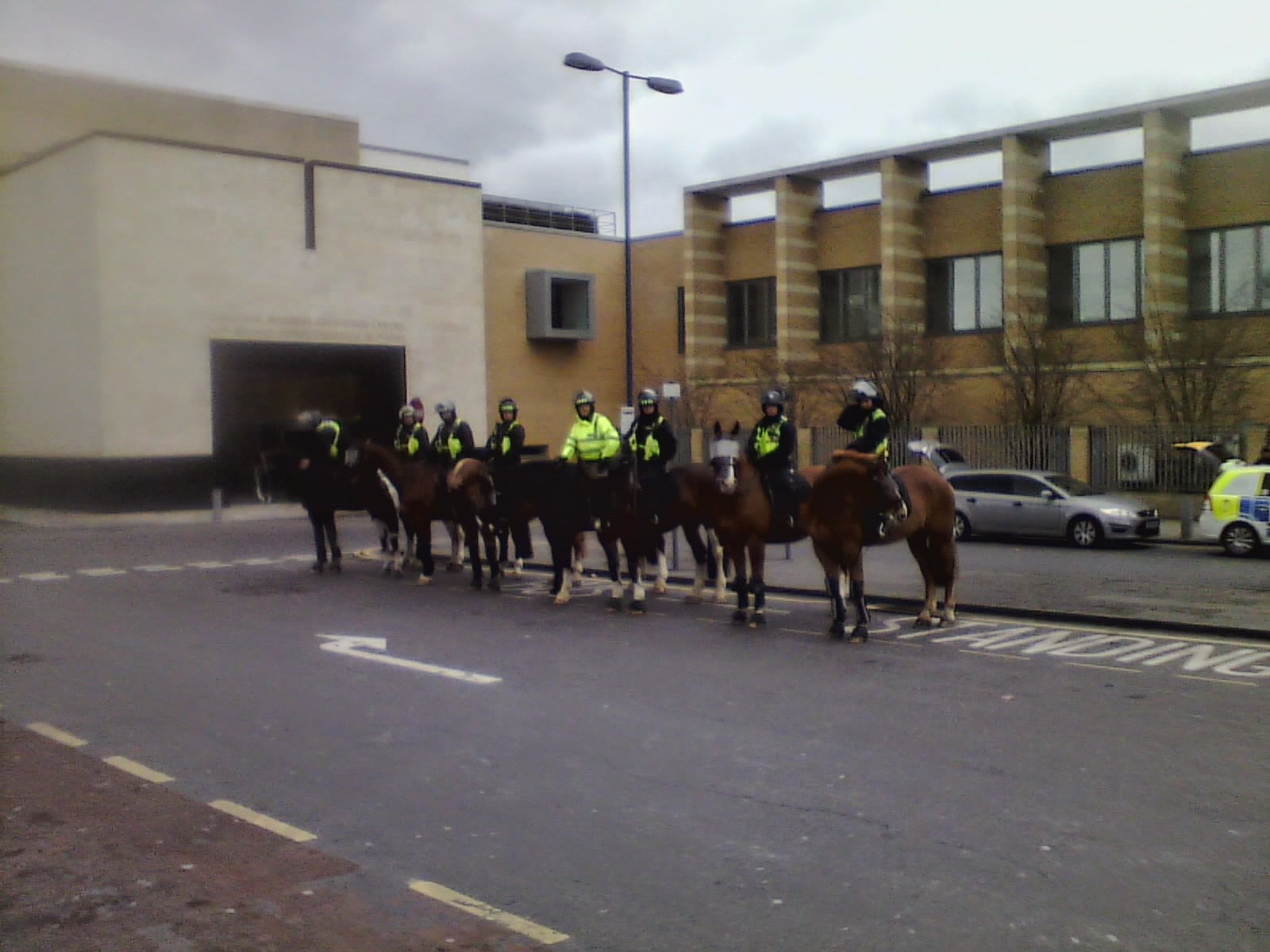 The English Defence League didn't come across to me as badly as they've been portrayed by the media. They are noisy and boisterous; some of them were drunk, but they were reasonably well behaved when not being harangued by their opponents. One of the curious onlookers was an old lady who was holding a hand-written placard which said: "ONE RACE- HUMAN RACE" and a few of the protesters came over and debated politely with her. One young woman in particular, near the back of the march, regularly stopped to talk to passers-by; she was diplomatic and courteous. Also I saw no symptoms of the EDL being racists; quite the opposite in fact. The young woman who was talking to people outside the protest at one point walked over and affectionately embraced a black woman on the pavement. To call the EDL "Nazi scum!" is slanderous in my view. There was also an incident at the station when I was in the toilets. I was alone in there with an Asian man and a crowd of EDL blokes walked in; I was afraid they were going to give the Asian some trouble, but they were fine with him, even though they were clearly a bit tipsy and very excited. They even held the door open for him with a smile. What they are is very much against militant Islam. This is why they fly the flags of and as well as the Union Jack and Cross. I've even seen the rainbow LGBT flag on films of their demos too. Their concerns about militant Islam are perfectly legitimate, but their concerns are without awareness. How many EDL supporters ever ask themselves a crucial question: Why has this happened? Why is it, in just two decades or so, we're suddenly beset by millions of Wabbahist radicals? I've spoken to EDL supporters online and the answer you'll usually get is something like: "Because there is so much immigration today from Muslim countries and the government are too lily-livered to do anything about it! And it helps Labour win votes!" But the truth is very different. A lot of Muslim immigrants are being radicalized in British mosques after they arrive in this country, and the government is not just passively allowing radical Wahhabism to grow here, they're deliberately making it happen, as I explain in the background links below. The street mob of angry Muslims in in 2009 which triggered the formation of the EDL was itself almost certainly a government intelligence operation. The leader of it is known to be a secret service asset. The EDL themselves are being controlled by many people with strong links to Mossad. They are themselves a controlled opposition. I think they mean well and are sincere people; they're definitely not "fascists!" any more than I am; but they need to become aware of the real rules of the game they're involved in.
See here for background: http://hpanwo-tv.blogspot.co.uk/2015/03/oxford-muslim-grooming-scandal.html.
And: http://hpanwo-voice.blogspot.co.uk/2015/03/islamification-in-asda.html.
And: http://hpanwo-voice.blogspot.co.uk/2013/08/engineered-islam.html.
And: http://hpanwo-voice.blogspot.co.uk/2011/11/poppy-burners-are-shills.html.
Posted by Ben Emlyn-Jones at 20:13

Excellent frontline reportage Ben cheers. edl are an MI5 front and their purpose is to foment violent confrontation that will result from the ongoing immigration saturation to the extent they will have their excuse and mass acceptance of martial law that coincides with the Jade Helm martial law prep that's in full effect in US. Indeed time is running out for us to wake enough up to counter this

Thanks, Anon. That's true. I hope they can become aware of the game they're being goaded into playing

Hi Ben. The EDL Have - in a fashion - 'evolved' over their short life span. Originally many had re-banded through their affiliations to football clubs and the fallout from football hooligan firms being clamped down on so you will hear much chanting related to football terrace chanting, I know this as some ex-aquaintences of mine from many years ago became involved with them. Contrary to common belief football firms are on the whole non-rascist, indeed, the Birmingham City 'Zulu's' took their name from the African warriors and the firm included many Black people. from what I have seen it merged into an anti-Islam agenda quite quickly with as you say many different backgrounds (Sikh etc). For a lot of these guy's and im in no way condoning all they stand for it is indeed a day out, comarardery under dissallusionment felt by many working class men. As you say there is a vunerability to them as they are exposed to manipulation due to ignorance and lack of education on matters we are savvy with. Like Operation Gladio these groups have always being vunurable in their nature and I beleive there is a lot of lost souls attached to these groups. I always say this but I believe that there is not any comprehensive threat from the so called Left or the Right. The threat is from the comprehensive standardised society being orchestrated by these multi agency umbrella groups controlled by what we sometimes call NWO. I wish such anergy could be channelled in a more fitting way that would actually serve their dissallusionment. P.S IGNORE MY SPELLING I HAVE HAD A COUPLE OF JOHN SMITHS - i dont drink much these days. Cheers Ben

It's alright, X, it is Easter, we're all entitled to indulge. I've come to think of the EDL as what the perpetrators of 9/11, 7/7 and Woolwich etc want as their end product. Among the educated and professional classes their equivalent are neocon think tanks like the Henry Jackson Society (God that Douglas Murray is so slimy!) It all serves the New World Order no mater who you are and what job you do.

#Henry Jackson Society...Yes Ben, you are on the money. These are the equivilents and their problem-reaction-solution tactics can alternate, albeit that the intrinsic motives are the same, viz-a-viz. a desired outcome of polarization, social duality in a Quasi-Marxist 'Community' that is anti-life in reality. Oh Douglas Murray....I do not find words! His Ilk pop up on such wishy washy shows as 'The Big Questions' on BBC (Not that I watch any Telly) alongside people from the 'Society For Social Cohesion'...Pass the sick bag. All joking aside they are very pernicious.

"Centre for social cohesion"!? That's so Orwellian that it must be a joke!

I heard about that, Buther, thanks. Yes, I knew the creep. He seemed very normal. Well, psychopaths do