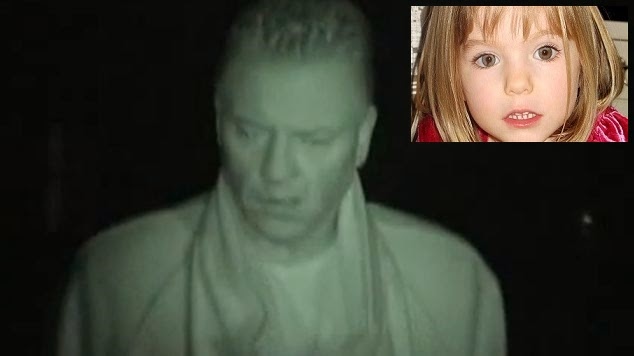 The TV celebrity medium Derek Acorah created a stir back in 2012 when The Sun published an article entitled: TV Psychic's sick "Maddie's Dead" Claim. Within Acorah was quoted as saying: "I know her parents are convinced Maddie is alive and I’m really sorry, but the little one has been over in the spirit world for some time. I don’t think she’ll be there long before she reincarnates. When children pass over who haven’t had full lives I believe they choose the time to come back in the same form again, as another little girl." The rest of the press quickly picked up on The Sun's scoop and there were many other similarly outraged responses from the media. Derek Acorah had planned a trip to Praia da Luz in where Madeleine was reported missing in 2007; he intended to use his paranormal skills to try and find out where she is. However, after this message from his spirit guide "Sam" he cancelled the project. Madeleine's parents Kate and Gerry McCann responded by saying they were "Sickened!... This character Derek Acorah is nothing but a self-publicist... It’s incredibly distasteful and insensitive... We believe our daughter is alive and the Metropolitan Police are currently pursuing an investigation to that effect." Acorah immediately accused The Sun of misquoting him, that he had had a telephone conversation with a journalist in order to discuss Acorah's upcoming tour of . The man had asked Acorah about his belief in reincarnation, the subject of Madeleine McCann had come up and the reporter had "put things together by association...", see: http://www.mirror.co.uk/news/uk-news/madeleine-mccann-is-dead-derek-acorah-833385. If "Sam" really had Derek's best interests at heart he might have warned his channel never to talk to tabloid newspapers.

As regular HPANWO-readers know, I have an open mind when it comes to mediums and psychic powers; I often attend spiritualist churches, for example see: http://hpanwo-voice.blogspot.co.uk/2015/01/alex-malarkey-ctcs.html and search "spiritualism" or "psychic". I'm not turning Skeptic when I say that I doubt that Derek Acorah is a real psychic; or at least if he is then his powers don't always work and so he often cheats, using the tried and tested methods that many people claiming to be mediums employ, see: http://hpanwo.blogspot.co.uk/2008/08/psychic-mafia-by-m-lamar-keene.html. Acorah became well known as the medium on the TV series Most Haunted and in one episode he appeared to go into a trance and was possessed by the spirit of a South African prison warder called Kreed Kafer. It turned out that Kreed Kafer never existed. He was fabricated by Skeptics on the team who fed it to Acorah as disinformation; "kreed kafer" is an anagram of "Derek faker". I don't know if Derek Acorah is genuinely psychic or not; I know that David Icke speaks fondly of him and that Acorah predicted accurately the meeting of him and his wife Pamela, now estranged. That's really not the point. What's significant here is that Acorah was announcing the death of Madeleine McCann. Since he said those words a lot of new information has been uncovered by researchers into the case, for example see: http://hpanwo-voice.blogspot.co.uk/2014/08/richplanet-live-in-london.html. It now appears very likely that Madeleine McCann is dead, and that she died back in May 2007 shortly before she was reported as missing by her mother and father. Why Madeleine's parents and their friends have lied about this and covered up the little girl's death, I don't know; nobody does. However it's pretty clear that for some reason the authorities want to maintain the illusion that Madeleine is not dead and is just missing. In the original article in The Sun, now no longer in the public domain, there are the following sensationalist related links: 3 New Clues to Maddie... Maddie Lookalike Driver in Cop Quiz... Madeleine McCann Holiday Promo is "Unforgivable". That newspaper is no doubt a part of the drive to maintain the "Find Maddy now!" meme. The narrative of Madeleine being alive and the quest to find her is constantly kept ticking along. I think it's unlikely that Derek Acorah really did contact the spirit of the little girl; but whether he did or he didn't, his input is an effort to derail that essential narrative. This is why I think he was treated so badly by Rupert Murdoch's propaganda publications.
Posted by Ben Emlyn-Jones at 19:14

Ben I agree with you on this mate. I have a friend who is a very good medium and has for many years practised tarot. She has said numerous times that Maddie McCann has passed over, and when she describes the feeling she says that Maddie has 'weight' on top of her like something is pushing her down.

Now is doesn't take a rocket scientist to work out what she is referring to here. My friend is a very straight talking lady who comes from a very good family and solid background. I totally have an open mind about this, but when someone who reads tarot is getting everything right and I mean everything.... You can't turn a blind eye.

In my view Maddie McCann is long gone and I'm afraid probably buried somewhere. It's sad for the parents and we all understand that.

But would you have left your kid unattended in a foreign country while you and your chums wined and dined?

Hi Darren. I take the idea of mediums seriously and they can be a good source of information. I agree that Maddie is almost certainly dead, and that's horrific. However I don't rule out foul play on the part of the parents and their fellow holiday-makers. If Maddie died of neglect, I doubt they'd be in a fit state of mind to care if they got caught out.