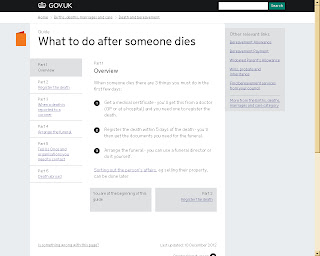 Recently somebody I know has experienced a bereavement; her mother died suddenly. It all happened so quickly. Late one evening just before Christmas the care home where she lives phoned her to ask her permission to send her mother to hospital. Just twenty-four hours later she was dead. My friend, her daughter and I were all at this lady’s bedside in hospital. What has followed since has started me thinking about the status and role of death in our society.
I’ve tackled this subject several times before, see: http://hpanwo-voice.blogspot.co.uk/2012/11/sheilas-funeral.html
And: http://hpanwo-tv.blogspot.co.uk/2011/08/bereavement-fee.html

As most HPANWO-readers will know, when somebody is born it is a legal requirement to register the birth; this action creates a statute law corporation of which the newly-born individual is the trustee/employee. It is via this state corporate entity that individual pays tax, operates within the legal system and other things like that. See here for more background: http://hpanwo-tv.blogspot.co.uk/2011/07/destroying-my-passport.html Also see the TPUC website on the main HPANWO site’s links column. The registration of birth is of course not the birth of the individual him or herself; if the birth were never registered then the individual would not somehow become magically “un-born”, however most people go through their entire lives behaving as if this were the case. When an individual dies their statute law corporate entity has to be closed down and this is a process I’ve witnessed these last few days. I’ve never had to deal with a death directly because nobody for whom I’m next-of-kin has ever died, but in this case my friend whose mother had just died was next-of-kin and so I travelled with her through this process to support her. It’s important to understand that the closing down procedure of a state law personal entity has to be administered by the next-of- kin and that the next-of-kin is usually the spouse or closest family relative, the child or parent of the deceased. This means that it is almost invariably one of the people who loved the deceased the most, and will therefore be the most shocked and saddened by their death. However, as you can see from this official Government document, the grief-stricken next-of-kin is expected to do their duty for Crown and Corporation. Just read the cold, matter-of-fact tone these pages: https://www.gov.uk/after-a-death/overview

In the case of my friend, her mother’s death was not unexpected as she was eighty-eight years old and had become very frail, but she was still very much loved, one of the most important people in my friend’s life. What’s more, if the deceased is much younger, or if a parent loses a child or a partner, the process is identical. The hospital staff were far more caring and sympathetic than the author of that Government publication, but they still had to goad my friend as gently as possible into dealing with the medical certification. We came back the next day to the hospital’s bereavement office where she was given more paperwork and more forms to sign. Then she had to register her mother’s death. The registrar was friendly and polite, but very sombre and blase; she scribbled away casually in her high-backed chair as my friend answered her questions. The death certificate needed a number of copies, each costing four pounds. This is remarkable when you consider that the average print shop usually charges mere pennies for copies. Imagine how bad for business it would be if a commercial printer demanded four pounds per copy! My friend was then given a list of various Government and local authority organizations to contact to inform them of her mother’s death: the Department of Work and Pensions, Council Tax and Housing Benefit office, Electoral Services, HM Revenue and Customs, her family GP, the Passports Office, even the library services. Some of these required a birth certificate copy sent by recorded post. This is even though she did choose to use the so-called “Tell us Once” service. I’m just glad that because my friend’s mum had some savings she will not have to go through applying for funeral expenses benefit like we did with Sheila, see link above. Death is the same as birth, in that registering a death doesn’t kill the individual; if the death were never registered then the deceased wouldn’t be magically resurrected. This process is merely what the legal system requires to dissolve the statue law corporation which was created when the birth was registered.

What I’ve learned from this experience, one that I may well have to perform myself at some point in the future (God, I hope not, especially not for those who should go after me!), is the extremely callous and unemotional nature of the Government. A dead person means no more to them than an empty milk carton, and it is discarded with as much dispassion. The next-of-kin is expected to emulate and imitate the Government’s own nonchalance when they sit around filling out forms and calling various helplines. My friend’s settee became a temporary office for this task. But one thing I thought, and she confirmed, was that it was obstructing her grieving process, and this was stripping her of her humanity. It couldn’t be more clear if they said it aloud: “A human resource is no longer functioning; it has been of no use for several decades and was actually an economic burden, consuming food, drink and energy while being incapable of hard labour. It’s just as well that we no longer need to carry it along.” It was Henry Kissinger who spoke about “useless eaters” and we've seen moves in recent years by the Government to force disabled people out of their wheelchairs and zimmers and into the same slave labour as everybody else, see: http://kentfreedommovement.ning.com/events/the-closing-atos-ceremony The distinct underlying message of all this is that if we are not of some practical economic use to the state then we are of no use at all and have no right to even live. So then perhaps we shouldn't expect them to get all sentimental when somebody dies. In fact everything associated with death in our society has a crown on it, including the death certificate and the web pages I link to above; modern death certificates even have a crown watermark. The Crown: the mark of ownership by the state. It’s like a cattle brand; and it says: “We own you. Your life is ours, but so is your dead body.”

So what ideally should the dying process be like? How will people end their lives in the post-Illuminati world? Firstly the next-of-kin and other close loved ones should not have to play any part in it except the emotional; isn’t that enough? Isn’t grief itself enough of a duty? Hopefully in the future there will no need for a statute law corporation at all, or at least it will greatly simplified, maybe to the point where it will be possible for undertakers to handle it along with the funeral. Death certificates could easily be issued by the doctor who certifies the death; it’s a process that could be done within five minutes, well and truly cutting out the middle man. As you can see from the list I made above, a lot of the paperwork could be eliminated simply by introducing Basic Income, as if it needed another advantage to justify itself, see: http://hpanwo.blogspot.co.uk/2008/05/basic-income.html What happens then is of course up to the loved ones of the deceased and will depend on their religious beliefs, or lack on them. Humanist funerals may become more popular, but the declassification of the secrets about the Afterlife will cause them to change in structure. (Hopefully this declassification will also bring comfort to the deceased’s loved ones… Oops, there goes my MBA again! See: http://hpanwo-voice.blogspot.co.uk/2012/06/no-mbas-on-wikipedia.html) These simple changes will totally transform the dying and grieving process and hopefully prevent any additional anguish to what is already the most difficult and upsetting experience a person can have.
Posted by Ben Emlyn-Jones at 19:52

Thanks, Anon. I'm going to writer another article on this subject soon.