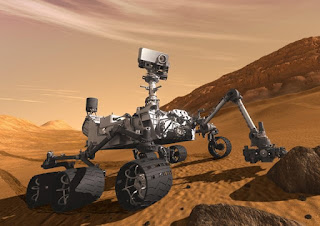 On Monday the 3rd of December NASA has promised to publish the results of a chemistry experiment performed remotely aboard the Mars Curiosity probe, see: http://www.youtube.com/watch?v=64hvqhgbaLw . Two weeks ago, the scientist in charge, Dr John Grotzinger, described it as being, “one for the history books!” However the Agency is determined to sit on the discovery until its grand announcement on Monday. But then the plot thickened because last weekend a second announcement was published which appears to burst that bubble slightly, see: http://www.pcmag.com/article2/0,2817,2412567,00.asp . Apparently it’s all just a storm in a teacup caused over a misunderstanding about what Grotzinger said. It refers to a curious new chemistry analysis process they’re using, not a specific finding obtained through the experiment.

Forgive me if my conspiracy theorist’s mind reaches for the suspicion switch! That sounds a little too much like this: http://rr0.org/data/1/9/4/7/07/09/RoswellDailyRecord/index.html . So, is somebody going to empty the Mars Curiosity saucer on Monday? Could Dr Grotzinger be the equivalent of Maj. Jesse Marcel. He spoke too soon and a new Gen. Ramey is going to come forward to humiliate him? Maybe as soon as he made his "history books!" speech, somebody pulled him into an office and said: “John! You weren’t supposed to tell them about that!” As I’ve said before, there is plenty of evidence to suggest that the existence of extraterrestrial life, even if it’s just fossils or frozen organic compounds, could be covered up by the authorities.
See here for background: http://hpanwo-voice.blogspot.co.uk/2012/11/bbc-blocks-brian-cox-over-alien-fears.html
And: http://hpanwo-voice.blogspot.co.uk/2009/11/ufo-disclosure-immient.html
And: http://hpanwo-radio.blogspot.co.uk/2012/08/programme-8-podcast-exopolitics-special.html

Or could it be something a bit more significant than a few molecules of carbohydrate? See: https://www.youtube.com/watch?v=tPkW1Db4W9g . Either way, will we ever know? Keep your eyes on the news next Monday. Look out for any clues that we might not be getting the whole truth!