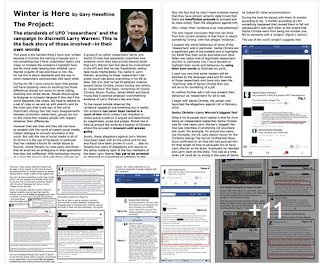 See here for essential background: https://hpanwo-voice.blogspot.co.uk/2017/08/the-larry-warren-controversy-part-21.html.
Gary Heseltine has published his own study into the Larry Warren controversy and the various personalities behind it. It contains a lot of the information you'll find in my own article series, but also a lot more. He has treated the case like a police investigation, something for which he is professionally trained and experienced. Like myself he finds this an unpleasant and difficult situation to deal with; but it is necessary and must be done.
See: https://www.facebook.com/heseltinegary/posts/1762150370480544.
The reaction to this from the Larry Warren Hate Cult has been the traditional and completely predictable social media chimp-out. They have hurled abuse at Gary, as well as Larry, myself and many others. They have repeated their "challenge" for a public debate; as if it were possible to discuss a logical case with these people. There have been the usual empty threats of "legal action!" and "calling the police!". I congratulate for his excellent analysis and commend him for dealing with a topic he really doesn't want to. Neither do I, but as I said, it is necessary to make a stand. This, inevitably, will not be the end of the story. There will be more retaliation. My prediction is that this dark night of UFOlogy will eventually burn itself out. I don't know how long that will take, but I believe 's article has made it sooner.
See here for the next part: https://hpanwo-voice.blogspot.co.uk/2017/10/the-larry-warren-controversy-part-23.html.

Heard sacha was "retiring"...not on facebook myself too much shit slinging but maybe now we can concentrate on finding irrefutable evidence of ET.great article by gary there.-Mungo

I hope so, Mungo. The saddest thing is while people are doing this they are NOT doing any UFOlogy.