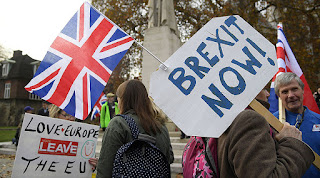 ...But for how long? The government is currently appealing against "the People's Challenge" lawsuit that won a high court ruling in an attempt to force the government to consult parliament over the referendum result in which the Vote Leave side won. The new hearing is an attempt to overturn Mzzzzzzzz Gina Miller and her devious cohorts, see here for essential background: http://hpanwo-voice.blogspot.co.uk/2016/11/brexit-betrayed.html. However in the meantime parliament has taken the bull by the horns in what is probably a very wise move. They've carried out a pre-emptive vote on Brexit. It was passed by a huge majority. It was a double vote that involved a compromise to get the Labour MP's on board, but there's no doubt Commons members are pretty much against this new twist in the EU-leaving tale and are ready to support the referendum decision. If the government lose their high court appeal, the parliamentary vote in itself may not be enough because it was only a substantive motion; the ruling may demand a full "Article 50 Act", which will cause another few months' delay, but this vote is a useful gauge of parliament's opinion which means the People's Challenge have merely interrupted an inevitable outcome. Source: https://www.rt.com/uk/369545-uk-parliament-article-50-vote/. Among those who voted against the motion are a few predictable names: David Lammy, MP for Tottenham; a nasty little tyrant who initiated the whole "second referendum" farce, see: http://hpanwo-voice.blogspot.co.uk/2016/09/brexit-awaits.html. So does this mean it will now be plain sailing all the way towards British independence from the EU?... Not a chance! This is just another battle won. The forces opposed to Brexit will double back and regroup. There are already signs that they have other tricks up their sleeve; probably something connected to the Scottish veto, see: http://www.bbc.co.uk/news/uk-scotland-scotland-politics-38250740. I've said it before and I'll say it again; there is only one solution to this crisis: let repeat their independence referendum taking into account the EU situation. This is not over yet and we must remain alert until the day the Article 50 process is complete.
See here for more background: http://hpanwo-voice.blogspot.co.uk/2016/10/kenneth-clarke-admits-no-brexit.html.
And: http://hpanwo-voice.blogspot.co.uk/2016/06/brexit-backlash-begins.html.
And: http://hpanwo-radio.blogspot.co.uk/2016/06/programme-193-podcast-eu-referendum.html.
And: http://hpanwo-tv.blogspot.co.uk/2016/06/brexit-reality.html.
Posted by Ben Emlyn-Jones at 16:36