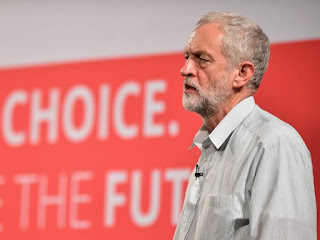 After their defeat to the Conservatives in the last general election, see: http://hpanwo-voice.blogspot.co.uk/2015/05/general-election-result.html, the Labour Party Leader, and Fabian Society chairman, Ed Miliband resigned and this launched a new leadership contest. The vote is due to begin this Friday and the winner and new Labour leader will be announced on the 12th of September. Three of the candidates are the usual suited non-entities under which 90% of British politicians nowadays can be categorized. Andy Burnham was Miliband's Shadow Health Secretary and has had his careerist eye on the leadership for some time. Yvette Cooper, the Shadow Home Secretary is the wife of Ed Balls and is his partner in politics as well... I can't imagine them having many interesting conversations at home and I advise them to become swingers if they don't want to die prematurely of boredom. Liz Kendall is a typical New Labour feminist who most famously complained once about the lack of female characters in Thomas the Tank Engine... yes, and she did it with a straight face. However the fourth candidate stands out. He is a completely unseeded backbencher called Jeremy Corbyn, MP for the Islington North constituency in . Corbyn is a Labour politician from another age, a "gentleman socialist" almost like a living Tony Benn, see: http://hpanwo-voice.blogspot.co.uk/2014/03/tony-benn-dies.html. He is a member of the Stop the War Coalition, Amnesty International, CND and, perhaps most significantly, the Palestinian Solidarity Campaign. He's an anti-poverty and anti-privatization campaigner, trade unionist and republican. He has spoken at many leftist public meetings and looks charismatic and informal with his open collar shirt and Lenin hat. He is the brother of Piers Corbyn somebody I know, the avant-garde meteorologist and critic of Carbon™-caused global warming, see: http://www.weatheraction.com/. When the first opinion polls were published the results were almost beyond belief; Jeremy Corbyn was distinctly in the lead, gaining between 50 and 60% as opposed to the measly 10 to 20% of eligible voters the other three achieved.

How could this possibly happen? We live in a world in which Old Labour is supposedly dead. Predictably the reaction from the collared Blairites has been horror. Tony Blair himself wrote an outraged letter to The Guardian in which he appears to express genuine passion for the first time in his political career. He stated that the Labour Party was "walking over the edge of cliff with jagged rocks below!" and that "if Jeremy Corbyn becomes leader it won't be a defeat like 1983 or 2015 at the next election. It will mean rout, possibly annihilation!", see: http://www.theguardian.com/politics/2015/aug/12/tony-blair-labour-faces-annihilation-if-jeremy-corbyn-wins-leadership. His rivals in the leadership race have been almost as disparaging. Yvette Cooper said Jeremy Corbyn's "politics are not credible." These statements are not empty diatribes; a tendency has emerged in the party that is calling for the leadership contest to be halted due to grounds of electoral fraud. This was triggered when the journalist Toby Young wrote a piece in The Daily Telegraph urging conservatives to join the Labour Party for the sole reason of voting for Jeremy Corbyn and therefore consigning Labour to oblivion for ever. This is based on the experience of the 1970's and 80's where Labour were defeated by the Tories more than once when they proposed a traditional left wing manifesto. Following that article there were over 600,000 applications to eligible Labour Leadership contest organizations including a hundred thousand applications for full Labour Party membership. Some of these applicants are not Labour supporters; they are conservatives who want to destroy Labour, mixed with Green Party supporters and socialists who want Labour to move back leftwards for positive reasons. Whatever their motives, Corbyn is their man. One of the loudest voices calling for the election to be suspended until the credentials of the new members can be verified is Simon Danczuk MP, a well-known critic of the far left. To give him his dues Danczuk is something of a hero to those, like me, who are concerned about the paedophile scandal, see here for more details: http://hpanwo-radio.blogspot.co.uk/2014/11/programme-112-podcast-brian-clare.html. This is an issue on which Corbyn has fallen silent every bit as much as his more conventional peers. Personally I would like to see Jeremy Corbyn win the Labour leadership contest simply because it would make British politics so much less bloody boring! The modern political system is specifically designed to seek a consensus and maintain a status quo. This means it has an inbuilt aversion to change; therefore we have to listen to one after another after another of these feeble, mendacious centrist clones spouting the same monotonous disingenuous drivel over and over again. Politicians of all the mainstream parties are like this. The rise of a radical eccentric firebrand would be like a defibrillator shock for the nation's political heart. I also rather like Corbyn in the sense that he's a man who is clearly in politics because of a principle, even if I don't share his ideals myself; again this makes him a very rare commodity in . He has a brain, a heart and a pair of balls to match; in a world where the surgical removal of all three of those organs has become a vital qualification for governmental office. 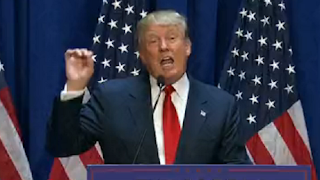 Interestingly, and maybe synchronistically, there is a very similar political drama currently playing out on the other side of the . Next year the will choose a new president. Barack Obama... or Barry Hussein Soetoro II, or whatever his name is... will finally be at the end of his second term. American statesmen are either crafty enough or kind enough not to subject their people to the same Illuminati gopher for more than eight years. In the run-up to the 2016 US Presidential Election the former front-runners have all been trumped, if you'll pardon the pun. The outsider who has broken out ahead of the pack is another maverick idealist that I instinctively warm to. Donald Trump, a billionaire businessman who runs a chain of estate agents, has run for the Republican nominations and recently stole the show at the live GOP candidate's TV debate. He is currently at 24% in the Republican voter polls, way ahead of the others who all got barely more than 10% maximum. He has totally different policies to Jeremy Corbyn, in fact his stance borders on the far right, yet he comes across as sincere just like Corbyn. He is charismatic, unconventional and down-to-Earth. How much of this is an act, it's hard to tell, but I think at least some of it is genuine. I admire that, even though I also disagree with a lot of what he says. Trump reminds me somewhat of Boris Johnson. There are two things of which I have no doubt: firstly Jeremy Corbyn is never going to be Labour leader. The "men in grey suits" would not permit it in a million years. Something will happen that will change the opinion polls and knock Corbyn off his perch. This could be a sex scandal, an accusation of financial misdeeds. Perhaps another kind of incident whose name will have the suffix "-gate". Then again he might just do a Robin Cook/John Smith and have a convenient heart attack. Maybe he will suddenly commit suicide for no reason like Dr David Kelly. I would at least recommend him to stay well away from for the next few weeks. The same thing goes for Donald Trump. If that man ever becomes US President I will eat my hat with garlic mayonnaise. No, our next political leaders will be very different to Trump and Corbyn; in other words they will be exactly the same as Obama and Miliband, and all the other mass-produced models that have come off the production line. I'm not suggesting you should vote for Corbyn or Trump; in fact, as I explain in the background links below, I suggest you should boycott this entire sham of a state democratic process. In fact as this article has been posted Donald Trump has called for the "execution" of Edward Snowden, a proposal I'm obviously opposed to, see: http://worldtruth.tv/flashback-donald-trump-calls-for-execution-of-edward-snowden/. We must seek to institute real change independently of the fraudulent system that the people been sucked into to give us the false impression we have political power when really we have none. Most importantly, real progress can only come about by becoming aware of the conspiracies being played against us.
See here for background: http://hpanwo-voice.blogspot.co.uk/2015/04/not-voting-reply-to-thomas-g-clark.html.
And: http://hpanwo-voice.blogspot.co.uk/2015/04/electioneering.html.
And: http://hpanwo-voice.blogspot.co.uk/2015/03/the-budget-2015.html.
Posted by Ben Emlyn-Jones at 18:15

NO political 'leader' or 'leaders' will ever - nor could ever - deliver a transformative political agenda that would address the monumental deceptions and injustices wrought here and globally by the powers that be.

Ordinary people - acting for themselves - have been directly or indirectly responsible for every stride toward justice in human history.

Investing hope in any individual 'leader', 'politician' or 'political class' to passionately pursue justice and peace with integrity, tirelessness and courage, is a fool's errand.

Always has been, always will be.

ALL individual humans are corruptible and thwartable - this is an eternal, universal law that our overlords grasp, yet millions do not.