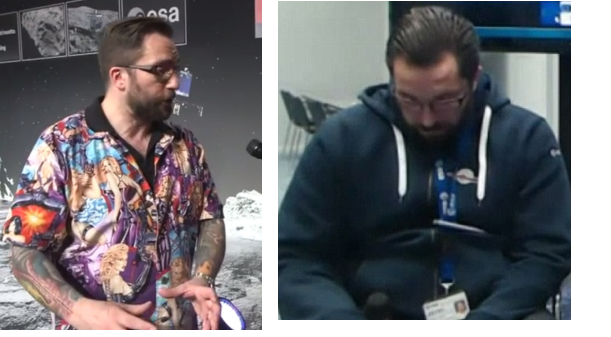 The recent TV coverage of the probe's historical landing on Comet 67P Churyumov–Gerasimenko has been marred by controversy. This has led to yet another tedious hashtag war. One of the mission leaders is Dr Matt Taylor and during the live TV coverage of the lander's final descent onto the comet's surface he wore a loudly colourful bowling shirt which featured a collage of mildly erotic images of young women. This very soon led to the trending of #shirtgate and #shirtstorm on Twitter. The claim was that his shirt was "sexist" and inappropriate for such a serious occasion. There were worries that it was offensive to women and might put women off from careers in "STEM" (Science, Technology, Engineering and Mathematics) a field which is supposedly "dominated by men!" Regular HPANWO-readers will know my views on feminism and there are some background links at the foot of the article. The common solutions proposed to social injustice against women, whether real or imaginary, is usually injustice against men. This is a major concern of mine. You can't fight injustice by trying to cancel it out with another injustice; all you get is a double-dose of injustice. However that is what is always tabled in these circumstances, in one form or another, which I think is deliberate psychological warfare. Dr Taylor has apologized for the "offence" he caused; he has done so very humbly and sincerely. As you can see, he even bursts into tears, see: http://www.dailymail.co.uk/news/article-2834451/Philae-comet-probe-scientist-embroiled-sexism-row-shirt-featuring-scantily-clad-women.html. His manifest upset has given some of his would-be antagonists a moment of pause. Even the feminist community has become split over this issue and Gia Milinovich (wife of Prof. Brian Cox) Tweeted: "I wish just half the people angry about "that shirt" actually did some practical work supporting women in science..." I watched the live stream of the mission as it happened, and I knew there would be trouble as soon as I saw Dr Taylor's shirt. But I warmed to him very much. He seems a down-to-Earth chap; and he's had a tattoo made on his leg showing a picture of the Rosetta and spacecraft he's so carefully helped to design and build; the tattoo was done by the husband of the woman who designed the shirt. I like the fact that he seems oblivious to the Orwellian shackles that too many other people live their lives under, and those petty, juvenile little tyrants who gave him such a hard time are the unpaid politically correct, Fabian Society, Common Purpose Thought Police of the real Big Brother. However there's a very big silver lining to this cloud. Dr Taylor's infamous shirt was made for him by an artist friend called Elly Prizeman, yes a female designer; and she is about to become very rich indeed because her small graphics company has been inundated with orders, see: http://www.essexchronicle.co.uk/Chelmsford-woman-Elly-Prizeman-hits-sexist/story-24562531-detail/story.html. I want my own "sexist" comet shirt! I've made enquiries at her studio, see: http://www.eternal-art.co.uk/.
See here for background: http://hpanwo-voice.blogspot.co.uk/2014/11/michael-buerk-on-im-celeb.html.
And: http://hpanwo-voice.blogspot.co.uk/2014/10/rape-axe.html.
And: http://hpanwo-voice.blogspot.co.uk/2014/07/women-against-feminism.html.
Posted by Ben Emlyn-Jones at 18:33

Dear Ben. Interesting piece. I get very concerned when this 'one sided' and 'constructive antagonism' begins to rear it's ugly head. It always makes me wonder not what the objective is but what the motivation is. I am of mixed parentage (Caribbean, Irish and White 'British') and I have had to consider the very same things happening within the context of 'race' (I hate this term as it implies that there is a default from the human race). Anyway, this came to my attention when a young Black guy was recently shot in America. I was not there and do not know the true natures of both individuals involved as there are arguments that both individuals had dodgy characters but my real issue was with the fact that on both sides assumptions were made on the afformentioned 'characters' of these people based on subjective assumptions. It strikes me that there is a large proportion of people who hijack these situations to promote their assertions and prosumptions for either profit or social manipulation. Why is it the case that on many occassions (but not all I must add) that when multiple young Black men are killed by other young Black men is there so little rallying and passion on the streets as to when a white police officer does the same regardless of the officers alleged racism or not (which may or may not be the case)? Likewise when the Feminist movement attacks this guy for a shirt artfully depicting erotic images of women (not untastefully I must add) does it not show the same passion for when Women objectify Men which is just as common or infact have the same fever against other Women who see erotica as empowerment?. I feel for this guy and I hope that the designer of these shirts sells a hell of a lot more shirts so that she can truly become empowered by a rather inflated bank balance due to sales. The only true 'Feminism' seems to be the indirect failures of feminism. Thanks for the article Ben.

Just to add that I in no way deny all the validity of prejudice that exists and the underlying complexities that underlie many problems in the world as regard to 'race', gender etc (I know I have experienced it as I'm sure we all do in the changing paradigms we are facing). What I am saying is that we must think in a critical analytic rather than generalisation. What has been did and what is being hid?????!!!!!

Hi X. You're welcome and thanks for you comment. I too am very aware that injustice against women does exist in this world, and it's very common sadly. This is a legitimate cause. The same goes for black people, homosexuals etc. I'm glad to say many of Taylor's defenders have been women. The powers of critical analysis are alive and well! And Ms Prizeman is about to make a fortune over this controversy and more men will be wearing them than ever! :-)

Scott Felton made a good point on Facebook yesterday. If astronomers discovered a comet on collision course with the Earth we'd only get a couple of year's notice and we'd need to build some kind of spacecraft very quickly capable of knocking it onto a new track. Those spoilt, pampered little femmes fatales would beg Dr Taylor to save their angry miserable lives so they could go on abusing men online!