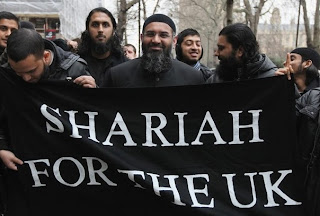 I'm not a supporter of the British National Party, nor am I an admirer of its leader Nick Griffin, yet occasionally he comes across some vital and intriguing information; shame he's too much of a narrow-minded buffoon to appreciate its significance. He has recently returned from a visit to , a country currently gripped by a terrible civil war and he has made some observations that contribute to my own research in a startling way; see this interview with him: http://www.youtube.com/watch?v=2MCZ4QAV7A4. I've explained many times how I think Islam is being used as the bait in the trap for the Big Brother State and New World Order, no more so than in , for example see: http://hpanwo-voice.blogspot.co.uk/2012/07/bnp-mad-dogs.html. The recent faked murder of Lee Rigby in Woolwich was part of this propaganda campaign, see: http://hpanwo-tv.blogspot.co.uk/2013/05/woolwich-muslim-terrorist-murder.html (This HPANWO Radio show gives even more details: http://hpanwo-radio.blogspot.co.uk/2013/07/programme-52-podcast-nick-kollerstrom.html). Unfortunately Nick Griffin's BNP have played a crucial role in spreading the falsehoods that make up this bait in the trap; a fact which seems to escape him in his interview above. However, he rightly points out that there is a wide variety of different denominations and sects within Islam and that in large parts of the Middle East people follow a more tolerant and peaceful interpretation of the Quran, including in Syria. What we in associate with Muslims: burkas, flogging, beheading, bombings etc, is not universal within the Muslim world, it relates to a single sect called Wahhabism, an interpretation dating back just two hundred years within a faith almost one thousand five hundred years old. The main misconception at the moment is that all of Islam is like Wahhabism and that the reason radical Islam exists in the is because it's "overflowing" in from its homelands via immigration. What says above indicates that this is untrue. Immigrants into adhere to many different interpretations of Islam, but they are only radicalized in British mosques after they arrive here. This means that the presence of radical Islam in the is an internal problem completely unrelated to immigration. Why and how has this happened?

Well, is well aware of the hypocrisy and contradiction of a "War on Terror" engineering regime changes in states run by the principles of Wahhabism, in which one of the key allies of the West is the world's principle Wahhabist theocracy, . He believes that the reason Wahhabism has gained such a foothold in the West is because of what he thinks are "secret Wahhabists" like the Muslim Council of Britain, and that the Government lets them have their way because they're scared of losing the Muslim vote. I disagree; I think there's much more going on here. The most interesting part of the interview comes at 12.01 where explains that the Syrian religious community wanted to send Sufi missionaries to the ; Sufism is a particularly benign and peacefully gnostic interpretation of Islam. He says it was "killed off from on high", but I think he's wrong about why; it wasn't about the MCB and the Labour Government losing votes. He says "MI6 were particularly enthusiastic" about it; how Nick Griffin knows what MI6 wants is a question you'll have to address to him. The main point though is that I think it's far more likely that the Wahhabist presence in the is deliberately engineered. The Wahhabist clerics in Mosques are put there on purpose by the British authorities; I've written before about some of the most well-known of these clerics actually being paid agents, see:  http://hpanwo-voice.blogspot.co.uk/2011/07/fake-muslim-posters.html. This means that MI6's "enthusiastic" attitude was probably a cover for the exact opposite one; why were they even involved? The tarring of all Islam with the Wahhabist brush, along with false flag terror attacks and staged charades like the Lee Rigby murder, point towards a major mass cultural and psychological manipulation project. The fermenting of Wahhabism across the world, which dates back to the Cold War, has been done for a similar purpose in international politics. It's just been announced in the news that chemical weapons have been used in the Syrian civil war, see: http://www.bbc.co.uk/news/world-middle-east-23809409; both sides in the conflict are blaming each other, but I suspect that a third party is really responsible. We need to expose this for the scam it is, and we need to do it now!
Posted by Ben Emlyn-Jones at 14:24