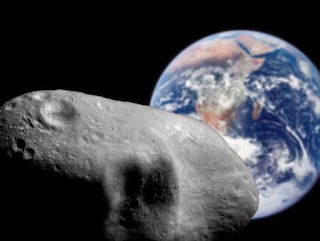 Every week on HPANWO Radio I do a space weather report; space weather is anything that happens in space which affects the Earth's atmosphere or surface, see Links column. The big news this week is that Friday the 15th of February is the day when asteroid 2012 DA14 passes by the Earth.

There are so many asteroids that it's impossible to invent names for all of them so the vast majority have what is called a Minor Planet Designation based on the year they were first spotted and the place the astronomer was who spotted it. 2012 DA14 was discovered by an observatory in on January the 23rd last year. I've been talking about it a lot on HPANWO Radio, and now it's here! 160 feet across! 130,000 tons! It will pass by the Earth this Friday. At 7.25 in the evening, Greenwich Mean Time, it will be at its closest point of approach, 17,000 miles. This sounds like a long way, but in cosmic terms it's scraping the paint off. It's inside the orbit of many satellites; this is a record for an object of this size and closeness. It's also moving very fast. Just four hours before it passes the Earth it will come within the orbital track of the moon. It takes days or weeks to send spacecraft that distance. If it struck the Earth it would produce an explosion of 2 to 4 megatons; that's bigger than most nuclear bombs. If this occurred over a populated area it would be devastating. But it will not strike the Earth. There's a zero percent chance of impact. There's a very small, a 0.033%, 1/3 of a percent, risk of impact in 2046, but that's not for 33 years. I was disappointed to find asteroid will not be visible to naked eye. But I'm going to go out and look for it anyway. I'm sure I've got some binoculars somewhere in the house. The best viewing location in , but and are also good places. Sadly I can't get there, but I'll have a go from .