My Interview in Wales on Sunday 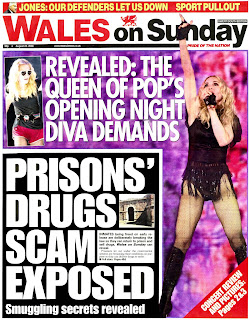 This is similar to the article where I'm featured in The Sun, see: http://hpanwo-voice.blogspot.com/2011/09/my-interview-in-sun.html It definitely has a tongue-in-cheek feel, but the reporter has reproduced my words and the meaning of them accurately. He got in touch with me because he saw my Welsh-sounding name and righly guessed that I am a Welsh boy, even though I've lived in England my whole adult life. Strange how he doesn't mention that I'm a Porter and that I only "work in hospital". That's like saying that the Prime Minister "works for the Government"!

However the comments are more scathing and that's what I expected of course. However I do have a supporter! Thanks "Ingenious"!

Actually the Irish Independent did a follow-up article featuring me after The Sun's story and there they called me "retarded". And this is after they didn't even speak to me! This Ian O'Doherty could have called me or written to me for my imput, but no! I could have at least explained that I was not an "organizer" or Weird 11. See: http://www.independent.ie/opinion/columnists/ian-odoherty/ian-odoherty-of-course-thats-the-reason-2884026.html
Posted by Ben Emlyn-Jones at 19:08