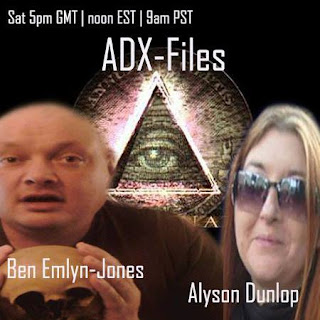 I have been interviewed on the ADX Files show with Alyson Dunlop. The podcast of the programme is now available here: http://www.spreaker.com/user/enemywithinradio/adx-files-no10-with-ben-emlyn-jones_1.
Subjects discussed include: the Starchild skull, Scottish independence vote, UFO's over and , Helen Duncan and much much more.
Posted by Ben Emlyn-Jones at 09:51

Hello Ben. What a happy show! Alyson sounds like a lovely person. I am interested in the Dublin UFO Aer Lingus case mentioned briefly in the piece. Do you have any links to the Butler's research to hand? Needless to say, I have personal experience of UFO cases in the greater Dublin area, one of which was mere weeks ago!

Glad you liked it, Laurence :-) She really is, and she's a great presenter. I heard about the Aer Lingus event in Timothy Good's book "Need to Know". What did you experience in Dublin?

Hello Ben. Internet searches on the subject yield the Tuskar Rock incident, which may be distinct from the incident referred to or perhaps they're related, I am somewhat confused.

In answer to your question regarding Dublin UFO experiences, I will document my most recent sighting for now as my other major unexplained UFO event goes back to the pre-internet age (about 1997) and I would like to find the press media (consisting of newspaper and TV clippings) associated with the sighting.

In any event, back to my most recent sighting. This was on the morning of Sunday 22nd Novemeber 2015 at about about 6:15 AM. My location and my estimate of the location of the UFO over Wicklow are as shown in the following URL:

Weather conditions were unusually mild (11 degrees C or so) with partially obscured skies consisting of low stratus cloud, which cloud I would estimate was about 600m OD elevation.

The location shown in the map file above was essentially on the eastern flank of the vast range of 750m to 900 m mountains that comprise the Wicklow Mountains national park (one of the remotest in Western Europe); I thus had a clear line of sight, there being only a pleasant bay and coastal plane between me and the mountains.

Before we go further, I should explain that the location is adjacent to Dublin Airport airspace. These flights are mainly arrivals on the very busy London route. However, I am very familiar with the associated commercial airplane activity and can state that the trajectory and location of the UFO was inconsistent with these.

The UFO appeared like two shooting stars (i.e. two fast moving white objects) followed by a stationary or slow moving red light between the two on either side. These objects appeared individually in succession.

The first high speed white light was at an elevation close to the base of the cloud layer appearing to travel from south-east to north-west (from my perspective) at an angle of about -30 degrees to the horizon (i.e. 120 degrees on a compass). Immediately after, going in the opposite direction (north-west to south-east, at an apparently identical angle, a second identical 'shooting star' appeared. The trajectory of the second object would be capable of intercepting the initial object.

At this point I would note that the objects were unlikely to be either near-orbit debris in the stratosphere or iridium flares, mainly owing to the visual properties and apparent elevations. In addition the UFOs were equally unlikely to be fighter jets; just last summer, Swiss airforce Northrop F-5's flew an aerobatics display almost at this exact location and I can therefore state that the UFO characteristics were different entirely.

Although my perspective indicated three independent objects in quick succession, I would not rule out the possibility that a centrally located airplane (emitting the red light) could have been 'buzzed' by a single very fast moving UFO; if this were the case, the UFO would be capable of near-immediate 180 degrees change of direction and speeds of several thousand miles per hour.

An even more extraordinary possibility, should the UFO be a single object, is that the white lights that I observed delineate the extents of a craft containing a central red light. If the latter is the case, the object would have been triangular with the apex of the triangle tilted at about 30 degrees groundward. Such a craft would have to blend perfectly with a near black cloudy sky, be silent, and of vast proportions of possibly 1 km in width. For this reason, my opinion is that the UFO was either a highly maneuverable unknown small aircraft or an incredible confluence of shooting stars, iridium flares, and aircraft with no apparent engine noise.

Hi Laurence. Thank you for that professionally formatted UFO report. I agree; it looks like something inexplicable through mundane phenomena, which you've made an effort to propose first. I've not heard of the Tuskar Rock Incident; maybe it was a missile. Timothy Good raises the subject in his book "Need to Know". I think he brings it up somewhere in this interview, but I can't recall where: https://www.youtube.com/watch?v=J0mHBeIXtAg Have you considered joining the HPANWO Forum, see links. It makes conversation far easier

Hello Ben. Thank you for the youtube link, which I will view with interest. I noticed the URL to Google maps is broken, so for completeness here it is again:

Location of sighting and topography


Regarding the Tuskar Rock incident, a co-author of an alternative book on the incident is the same Dermot Butler, who appears to believe a possible UFO or at least military involvement and associated cover-up.


In answer to your question, I will consider joining your forum. Regards.

That would be great, Laurence. Thanks for the links. "This hasn't stopped the conspiracy theorists..." is a typical line from the Irish Independent. They once said that I was "full of retarded guff".

Also I must apologize for the lack of new material on HPANWO Voice right now. I've just not had time this past week. More coming soon.

Hello Ben. I found the article by the 'journalist' in question (term used advisedly) or as he is should be known, 'Paddy O'Hitchins' for his craven, and quite frankly embarrassing, plagiarising of Christopher Hitchins. I look forward to your upcoming articles, which are light years ahead of anything the Irish Independent can muster.