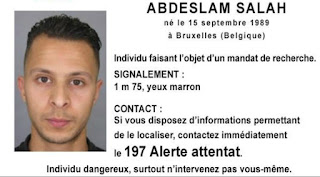 See here for essential background: http://hpanwo-voice.blogspot.co.uk/2015/11/paris-attacks-2-symptoms.html.
It is now the fourth day since the atrocity and the hunt goes on... supposedly... for the suspect in the attacks, Salah Abdeslam, who is still at large. His brother, Mohamed Abdeslam, has been released without charge and denies all involvement. President Hollande has vowed to destroy and the French forces in the have carried out retaliatory air strikes in against Islamic State positions. The state has mobilized 115,000 police officers into the operation to track down the missing suspect and maintain security in the continued state of emergency, see: http://www.bbc.co.uk/news/world-europe-34840699. Another thing I predicted before has come true; the published image of the leader of the attack conspiracy does indeed have a black beard, a scowling expression and evil eyes. He also has a sinister-sounding name, "Abdelhamid Abaaoud", see: http://www.bbc.co.uk/news/live/world-europe-34840858. Another development that was no surprise to me was that the prolonged new security measures have started to solidify, in and also in other countries. In , where I live, Lord Carlisle of the Liberal Democrats has warned that the draft Investigatory Powers bill should be fast-tracked into law. He called the bill "absolutely vital... the current holes in the government's ability to spy on citizens allows terrorists a 'safe space' to communicate!", see: http://www.mirror.co.uk/news/uk-news/paris-terror-attacks-calls-snoopers-6835963. I've written about this matter myself; it seems that the Talk Talk hacker was not the real bait in the trap, see: http://hpanwo-voice.blogspot.co.uk/2015/11/internet-surveillance-and-talk-talk.html. A Facebook user from has been arrested for praising the attackers on his timeline. He said: "My brothers did well in . Now we have proved that there's a bit of intelligence, planning and synchronization going into our killings. You people are starting to realize that we are a force to be reckoned with. We are , this is our time now!... Keep your eyes on , Allahu Akbar! RIP, Jihadi John!" Obviously this is a horrible thing to say and it sounds like this person was inciting violence and hatred, but the government is deliberately blurring the lines between legitimate cause to take action on real criminals and simply the expression of opinion. Individuals glorifying terrorism are being conflated with those analyzing the true nature of terrorism. we are described as "non-violent extremists" and are categorized in the same group as those who are violent... people like me. Other conspiratorial researchers have got involving with this issue since Nick Kollerstrom and myself. The American activist and former colleague of mine on The People's Voice, Ken O'Keefe, has given a brilliant assessment of the situation on Press TV, see: https://www.facebook.com/MPACUK1Ummah/videos/1478473405754889/. Here are two other gems, see: https://www.youtube.com/watch?v=L7GAbVhjTSw and: https://www.youtube.com/watch?v=amzq13f7X2c. Kerry Cassidy of Project Camelot has done a live hangout with Ole Dammegard, see: https://www.youtube.com/watch?v=WvWwglFRwaQ.

Along with the brave, controlled and methodical stance the Truth movement have made over has been some more dubious evidence. This I strongly suspect is fake, see: http://www.inspiretochangeworld.com/2015/11/paris-attack-reported-on-wikipedia-and-twitter-before-it-happened/. Another article was posted online that accuses the French authorities of killing the people said to be in the Bataclan Theatre outside and then planted the bodies in the auditorium. The article itself is not very coherent or comprehensive, but the photograph looks genuine and one can clearly see that bodies have been manhandled. I apologize for the graphic image in this link, but it could be an essential piece of evidence even if it is very gruesome, like the Zapruder film, see: http://www.philosophers-stone.co.uk/?p=5452. Of course the image could be Photoshopped, but then what couldn't these days? In the course of discussing this point I have lost a few more friends. There is now a small but vocal tendency within the Truth movement which refuses to accept that was a false flag. Some of them have become quite verbally aggressive. The comments box beneath the post I made on Facebook quickly became very heated and soon it crossed over that line in which a chain reaction of meaningless insult and rhetoric begins. After that happens, the comments become a self-sustaining downward spiral of ego-battling abuse and all rational discourse becomes impossible. This is all too common in debates, especially online, see: http://hpanwo-voice.blogspot.co.uk/2015/01/debating.html. The good thing about a Facebook feed though is that if you just log out for a few hours, anything troublesome soon disappears over the horizon. Just as an aside: another good example of this kind of thing occurred a few months ago when an accusation emerged of a child abuse ring based in Hampstead, . A counter claim followed denouncing it as a hoax. What followed can only be described as the Facebook equivalent of nuclear war. I joined some of the groups related to Hampstead to try and gain some information, but I very quickly gave up. It was like walking in on a bar room brawl... I just hope for the children's sake that the hoax factions are right. Back on the subject of : I have made a HPANWO TV emergency programme on the subject, see: http://hpanwo-tv.blogspot.co.uk/2015/11/paris-attacks.html. I have also broadcast a special HPANWO Radio show on the issue, see: http://hpanwo-radio.blogspot.co.uk/2015/11/programme-162-podcast-paris-attacks.html.
Posted by Ben Emlyn-Jones at 13:53