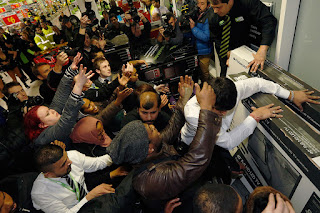 Black Friday has long been a tradition in the and several other countries where the festival of Thanksgiving Day is celebrated. It takes place on the day after Thanksgiving Day, the last Friday of November, and involves high street shops suddenly reducing the prices on all their stock. For retailers, this is a tactic to clear the shelves for their Christmas line; for the consumer it's a unique opportunity to purchase goods at a heavy discount, usually less than half price. This has led to the annual Black Friday riot. People will arrive very early at the door of the shop, sometimes even the night before. You might see tents set up in the street or people squatting in the gutter wrapped in a sleeping bag. The moment the doors open the shoppers will bundle in and dash to grab the precious merchandise they crave, something they normally could not afford. The problem is, there is only a limited supply of stock, always less than the demand; and this leads to conflict. The police and emergency services are deliberately stationed on standby at the major stores where the Black Friday sale is hosted, and they are usually needed. Loud arguments and even fights sometimes break out on the aisles as two or more people try to pick up the same item at the same time. People are often arrested for public order offences and sometimes are injured in fights, and being crushed or trampled. Over a billion pounds has been spent across the nation in just a few hours. Source: http://www.telegraph.co.uk/finance/black-friday/12016907/Black-Friday-2015-best-UK-deals-what-when-and-where.html. In we do not celebrate Thanksgiving; most of the traditions of Thanksgiving, the turkey dinner and family gatherings etc, we do enjoy, but these are all at Christmas. However this year we are having Black Friday. According to Wikipedia, Black Friday has occurred in the and other parts of since 2003, but that has always been unofficial; it's never formally called by its name. This year the name Black Friday has been widely used in the media for the first time. As you can see in the source link above, British shoppers show no hesitation in respecting the traditions of their American counterparts; including long queues, bursting in when the doors open and rioting. I can understand the enthusiasm for economical shopping; indeed, I'm not a rich man and I walk six miles once a week just to buy a particular brand of tasty and very cheap cheese from a market stall. However these Black Friday scenes are sad spectacles in my view. They're more than just people employing a rational strategy to save money; they're an obsessive and thoughtless insurrection of consumerism. According to people I know who were there, a lot of the shoppers who attend Black Friday are poor families who could not afford the goods available on any other day of the year; however, do those same families camp outside the office buildings of those who made them so poor in the first place? It seems that the only thing that can arouse the passions of modern urban humanity is the prospect of scooping up some cheap Chinese consumer-durables. It's a shame that these same people don't pour into Houses of Parliament and the Halls of Congress to snatch a government minister off his pedestal and shove his head down a toilet... while stocks last.
See here for background: http://hpanwo-voice.blogspot.co.uk/2013/12/black-friday-riots.html.
And: http://hpanwo-voice.blogspot.co.uk/2012/12/christmas-high-street-sales-figures.html.
Posted by Ben Emlyn-Jones at 16:40

Couldn't agree with you more Ben. A dreadful example of the march of global Americanisation. As an aside, I would consider your opposition to the US hegemony to mirror the counter-Reformation movement. Indeed, I have become increasingly convinced that the modern 'Truth movement' of the UK is in some respects reminiscent of an England rediscovering it's pre-Reformation Catholic soul. The incredible discovery of Richard III, one of England's last Catholic Kings, may be seen as more than a mere coincidence in the light of this possibility.

At the time of the Reformation--500 years ago in 2017--England was characterised by widespread opposition to the decimation of the monasteries, which included three major rebellions. The rebellions showed that Catholic practices and the pre-Reformation economic system based on local trade with monasteries independent of the all powerful State represented by Henry VIII were much loved by the people of the land. Some welcomed the Reformation, but for others it was imposed at the point of a sword. Couple this with Protestant derived pamphleteering and it is my thesis that the modern Truth movement represents a serendipitous amalgam of Protestant inspired counter-culturalism and pre-Reformation social justice, quite distinct from the abysmal anti-establishment movements of popular Marxist culture.

Hi Laurence. That's an interesting idea. Where I live in Oxford, it played a crucial role in that process. We had one of the last stake burnings here at the order of Queen Mary.

Hello Ben. I was unaware of the central role of Oxford in the counter-Reformation. Now that you mention it, Oxford's pre-eminence would stand to reason, Oxford being a Catholic University, originally and laterally the home of John Henry Newman's Oxford Movement. The Oxford Movement--although not known widely--is still ongoing within high church Anglicanism Oxford Movement