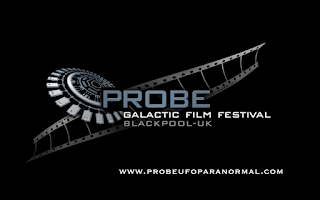 I'm an aficionado of the UFO/conspiracy/paranormal conference circuit. I attend as many as time and money allow. Luckily in the last couple of years I've been speaking or working at many of them too, or been given a press pass by the organizer, and so don't have to pay. My favourite conference of all has to be UK Probe International. This twice yearly event is the first one I ever attended in October 2006 and it has become an important part of my life. I'm bonded like family to the people who join me there regularly. I've covered the conference on the HPANWO blog and HPANWO TV many times, most recently see: http://hpanwo.blogspot.co.uk/2014/10/probe-autumn-2014.html. However this series of events is now sadly coming to an end. Since it began in 1990, the organizers of the Probe conferences were Jean and Sam Wright and they quickly built a pioneering format which many other later UFO/conspiracy/paranormal conferences were inspired by. Yet Jean and Sam were not young people and in 2011 Jean tragically died. Sam has steadfastly continued with the Probe schedule since then, sharing the job of organization with his son Paul and other local supporters. Nevertheless this situation has now changed. Although the Wright family remain chief executive officers, the Probe franchise has been licensed to a brand new organizational business team who will be transforming the entire Probe experience.

The first of the new Probe conferences will be held in October 2016, from the Friday the 14th to October the 16th, and it will include a film festival, and special relaunch celebration; plus an exclusive evening presentation by Erich von Däniken, author of many books about the ancient alien theoy, including Chariots of the Gods? and Remnants of the Gods. The venue is moving from Lytham St Annes to the north shore of Blackpool and the luxury Norbreck Castle Hotel, a splendid 480 room 19th century hotel with the beach in front of it and a golf course behind. There's talk of livestreaming the proceedings on the net and there will be a demonstration by Michael Ostaski a "speed painter", which means what it literally says. He paints amazing pictures within an hour or so accompanied by music composed by Howard Wulkan. The new management team includes Vitaly Safarov, an ET contact experiencer from and who has spoken at the conference in 2009, see: http://hpanwo.blogspot.co.uk/2009/10/probe-autumn-2008-part-3.html. There are other people from the who used to be connected with Dolores Cannon and her Ozark Mountains Press. Phenomena magazine, edited by Steve Mera, is one of the new sponsors. There's a contingent from and several other countries and organizations too. Vitaly did a special announcement on stage during the last conference where I was a speaker. On November the 1st the new website was launched, see: http://probeufoparanormal.com/. The Probe conference is basically moving upmarket. Its new format will put it in the same league as the International UFO Congress in and the annual Nexus conferences in and the . I must say the outfit looks very impressive and I look forward to attending the first event, if I can. However I will miss what we have now with Probe. A draughty basketball court full of plastic folding chairs, hired at the YMCA in St Annes-on-the-Sea is a far cry from the mighty Norbreck Castle with its thousand-seat ballroom, its health club and its "Norcalympia" conference centre; but it had a sweet charm unique to itself. I'm well aware that Sam Wright cannot carry on organizing the conference forever and change was inevitable. I wish "new Probe" all the very best of luck and I hope they can deliver the events that they promise, ones that are educational, enjoyable and inspirational. As they say in their mission statement, they wish to: "...educate and entertain audiences in the field of UFOlogy, the paranormal and spirituality; and to offer a new generation of speakers and researchers a public platform where transformational media, such as lectures, conscious films and documentaries, arts, fashion and courses can be showcased to a global audience. It is hoped that we can expand our horizons in the field, to encourage a greater understanding of our world and that we can engage with a greater community around the globe; to facilitate the broadest information platform in collaboration with organisations alike." Tickets are not yet on sale and the website doesn't say how much they will cost, but it is inescapable that they will be more expensive than those for the present conference, probably significantly so. How many of the current delegates have a budget that can accommodate the October conference? I fear for the future of the Probe community, my second family. The organizers of "new Probe" want to preserve the legacy of Jean and Sam Wright and that naturally includes the close-knit society of the Probe delegation, but is that realistic? We will have to wait and see. In the meantime the last ever Probe conference in its original format will be taking place next April; the old website is still up and details will be published there shortly: http://www.ukprobe.com/. Please come to this event if you can because after this there will never be another chance to experience the Probe conferences as I've described them in my many reports. And go to the first ever "new Probe" event in October if you can. My friend and fellow researcher Ellis Taylor has done his own write-up of the last event which includes his own feelings about "new Probe", see: http://ellisctaylor.com/2015/10/18/probe-international-p-i-%CF%80-227-the-mysteries-keep-coming/.
See here for more background: http://hpanwo-voice.blogspot.co.uk/2015/05/ben-emlyn-jones-at-uk-probe.html.
And: http://hpanwo-tv.blogspot.co.uk/2013/10/return-to-probe.html.
And: http://hpanwo-tv.blogspot.co.uk/2010/10/uk-probe-conference-2010.html.
Posted by Ben Emlyn-Jones at 18:31

Ibu.Karina Safah said...
This comment has been removed by a blog administrator.
5 November 2015 at 06:46

Pak Kusniadi said...
This comment has been removed by a blog administrator.
5 November 2015 at 06:58

Ibu.Karina Safah said...
This comment has been removed by a blog administrator.
6 November 2015 at 03:28