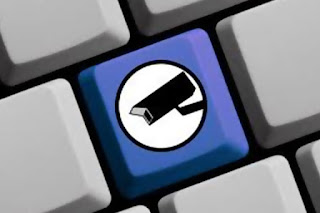 Teresa May is the most authoritarian home secretary since David Blunkett... which wasn't long ago. She has built a suspiciously similar framework over the very foundations he laid, even though she is Conservative and he was Labour. The latest new measure has been given the usual Orwellian euphemistic name, the "draft Investigatory Powers bill". Well, they can hardly sell it as the "Internet Total Control and Regulation bill" can they? The reason for its introduction is a classic problem-reaction-solution. In her address in the House of Commons where she proposes her bill Ms May mentions organized crime, fraud, terrorists and child abuse in the space of two minutes; "the threat is clear". This is an insult considering that the threat from all three of those examples primarily originate within the walls of Parliament itself, see: http://hpanwo-voice.blogspot.co.uk/2015/05/general-election-result.html, and: http://hpanwo-tv.blogspot.co.uk/2015/07/nick-kollerstrom-in-oxford-london.html, and: http://hpanwo-voice.blogspot.co.uk/2015/03/cyril-smith-was-set-free.html. She has also reassured us that there will be limits on the powers of this legislation; of course there will be... for now. Once the go-ahead is given, the infrastructure of total internet control can be developed without obstruction and the law changed again when it is ready; frog-in-a-saucepan style. Source: http://www.bbc.co.uk/news/uk-politics-34715872. Shami Chakrabarti, the director of Liberty, the civil rights legal defence group, said in response: "After all the talk of climb-downs and safeguards, this long-awaited Bill constitutes a breath-taking attack on the internet security of every man, woman and child in our country. We must now look to Parliament to step in where ministers have failed and strike a better balance between privacy and surveillance." Perhaps a recommended first step for her would be to quit the Ditchley Foundation, see: http://hpanwo-voice.blogspot.co.uk/2015/06/ditchley-park-on-internet-security.html. A couple a weeks ago the communications company Talk Talk was struck down by a cyber-attack amidst much publicity, see: http://www.bbc.co.uk/news/business-34743185. In light of the convenient timing of Teresa May's bill, I wonder if it was a real event. None of this is a surprise to anybody in the conspiratorial community. No doubt intelligence agencies carry out this kind of intrusiveness anyway. Even this mainstream article brings up Edward Snowden's claims: http://www.theguardian.com/world/2015/nov/04/theresa-may-surveillance-measures-edward-snowden.
See here for background: http://hpanwo-voice.blogspot.co.uk/2014/12/young-people-and-1984.html.
And: http://hpanwo-voice.blogspot.co.uk/2014/01/neon-nettle-article.html.
And: http://hpanwo-voice.blogspot.co.uk/2015/10/assange-and-snowden-latest-bombshells.html.
Posted by Ben Emlyn-Jones at 08:52

Just discussing this yesterday. Yes - to those conspiracy 'theorists' we have always known this has been going on, now they have the excuse

Maybe after THIS they will listen to us, X. Was Jimmy Savile and Hillsborough not enough to convince them?