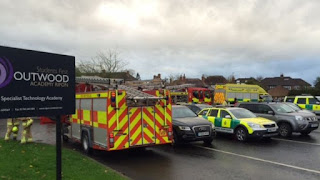 A mysterious incident has taken place at a school in Ripon, . Yesterday at , all six hundred pupils at the were in the hall taking part in an Armistice Day service when some of them began to faint. Up to forty children in all were affected; many others also complained of severe nausea. A year eight student described how the young attendees began throwing up on the floor and then some spontaneously fell to the ground together "... like dominoes." There was chaos and the teachers evacuated the hall. The children were led out into the open air because the cause was suspected to be some kind of gas or chemical in the air. Ambulances and fire engines attended and treated a number of pupils at the scene; none of them were admitted to hospital. The school day went ahead as normal, but some of the students still complained of feeling unwell. There was a dramatic scene as some of the parents went to the school to make sure their children were alright and the school was placed under "lockdown". The teachers could have been concerned that the kids had caught some kind of infection and they didn't want then to spread it, but reports don't make their motives clear. The fire brigade's hazardous materials team checked out the area but could find no trace of any contamination. Dave Winspear, a spokesman for the emergency services, said: "The interior of the school was a hot place and some children had become overwhelmed... We are of the view the children just fainted and there was a ripple effect throughout the school." Source: http://www.msn.com/en-gb/news/uknews/several-students-collapse-at-yorkshire-school/ar-CCfeOS?li=AAaeUIW&ocid=mailsignoutmd. What I find strange about this case is that it is very similar to the Hollinwell Incident of July 1980, which I discuss here: http://hpanwo-tv.blogspot.co.uk/2014/04/the-hollinwell-incident.html. There has also been a more recent event of this kind in , see: http://hpanwo-voice.blogspot.co.uk/2014/11/the-japanese-hollinwell.html. As I explain in these background links, I am not convinced by the mass-hysteria theory. The absence of any other explanation like chemicals, gas, disease etc, doesn't automatically make mass-hysteria more likely. As with Hollinwell, I suspect this case in Ripon will remain unsolved for now.
Posted by Ben Emlyn-Jones at 18:02

Very strange situation. Have there been any updates ?

Not yet, Matt. The last news story about it was Tuesday night.

It seems suspicious that they all fell down together. Has an investigation been held and if so has anyone asked if the children had been playing ring-a-ring-a-roses? This could save time and effort in the long run. Sometimes you just need to get back to grass roots level.