Microchips for all Welsh Dogs 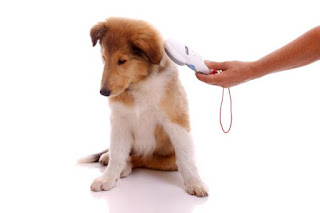 The National Assembly for Wales has exercised its devolved muscles in support of the Big Brother database state agenda by decreeing that all dogs west of the border must be microchipped from April next year. Implanted electronics in animals go back many years to when the technology first became available. The chip is inserted beneath the skin, usually at the back of the animal's neck, and it contains the name and address of the owner and a unique identifying number. The animal suffers no pain or discomfort by having the chip inside its body. The benefits are that pets can be easily identified if they get lost and can be reunited easily with their owners. Farmers are protected from rustlers. Cruelty to animals can be better policed and prevented. Source: http://www.dailypost.co.uk/news/north-wales-news/dogs-wales-must-microchipped-april-10304833. A number of companies now specialize in producing and distributing these electronics, such as Tracer, PETtrac and AVID. The problem is that there is an agenda to implant humans with microchips too for the purposes of government control; see background links below for more details. The animal microchipping infrastructure will act as a good model for the proposed one for humans. For instance, along with the companies that make chips for animals are other similar firms that make chips for humans, like VeriChip and Digital Angel. There are voluntary trials involving human microchipping, but then animal chipping used to be optional too. Are we another step along the road towards a totally controlled population whose every action is governed by an electronic system?
See here for background: http://hpanwo-voice.blogspot.co.uk/2014/01/all-people-to-be-microchipped-within.html.
And: http://hpanwo-radio.blogspot.co.uk/2015/10/programme-157-podcast-pippa-king.html.
And: http://hpanwo-voice.blogspot.co.uk/2015/02/swedish-office-microchips-staff.html.
And: http://hpanwo-voice.blogspot.co.uk/2014/01/neon-nettle-article.html.
Posted by Ben Emlyn-Jones at 18:37

Pak Kusniadi said...
This comment has been removed by a blog administrator.
4 November 2015 at 05:30