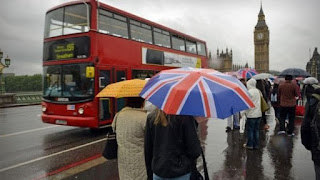 Two years ago the entire northern hemisphere of the earth was struck by a malformation of the polar vortex. This means that all through the winter of 2013-14 the weather was very different to normal. Some regions, especially , suffered far colder conditions than average; whereas , particularly the , experienced exceptionally mild, wet and windy weather. For enthusiasts of the man-made climate change culture this was to be regarded as a "wake-up call". Dr Mayer Hillman even referred to it exactly as that in his appeal for a global state of emergency to save the planet, see: http://hpanwo-voice.blogspot.co.uk/2014/06/anything-to-save-planet.html. However last winter I breathed a sigh of relief when it turned out to be pretty normal for a British winter; a bit of wet, a bit of cold, snow here and there. According to the Daily Express on the 3rd of November this year, is about to face the coldest winter in fifty years... mind you they say that every autumn. The Met Office itself doesn't give forecasts more than thirty days ahead and admits that any forecast beyond a mere six days tends to be very imprecise. The Express however has decreed we're going to have a cold winter because of the re-emergence of El Niño, see: http://www.express.co.uk/news/weather/611100/Winter-2015-Heavy-Snow-record-cold-weather-forecast-UK. Meaning "little boy" in Spanish, El Niño is a standing current that moves warm water across the eastern Pacific Ocean. It was been oscillating in an unusual way for the last decade and this is the most commonly blamed culprit for the drought, which is now in its third season, see: http://hpanwo-radio.blogspot.co.uk/2015/03/ben-emlyn-jones-on-mind-set-podcast-81.html. It is also believed to influence the climate in other parts of the world and might be the cause of harsh winters in the in the late 2000's. However, so far the weather has been very unusual and I've a feeling in two weeks' time we're going to hear the phrase "warmest November on record!" echo across the media. Normally at this time of year, late autumn, the weather would be very changeable with plenty of rainy days; but there would also be a few frosty mornings and even some snow. This has not happened; in fact I don't think the thermometer has dropped much below ten degrees since the month began. We've also had almost no wind and it has been wetter than the mean. Because I work a lot outdoors nowadays I notice these things more. I'm concerned we're going to have another winter like 2013-14, which was miserable and destructive; large areas were flooded out and a million people had to leave their homes. I know weather is essentially a chaotic system that is inherently unpredictable, but I've found that weather patterns can often set in and become entrenched, sometimes for several months at a time. This certainly happened during the heatwave of 2003 and the floods ten years later. There is another question that the Met Office will never address, but we must still ask: How many of the extreme weather patterns in the world are natural? As I detail in the background links below, the technology does exist to control the weather, even on a continental and global scale. I've seen a lot of chemtrailing over the last few days and, ironically as I write this, today is the first major change we've seen in the weather all month. It's been windy because of "Storm Abigail". We will have to wait and see which way the atmospheric conditions go during the next few months, but whichever it is, we cannot assume that it is not the deliberate work of somebody.
See here for background: http://hpanwo-voice.blogspot.co.uk/2012/12/london-chemtrails-awareness-conference.html.
And: http://hpanwo-voice.blogspot.co.uk/2015/01/eyes-in-outer-space.html.
And: http://hpanwo-voice.blogspot.co.uk/2014/07/lynmouth-flood.html.
And: http://hpanwo-radio.blogspot.co.uk/2013/01/programme-30-podcast-alix-longman.html.
Posted by Ben Emlyn-Jones at 18:35

I think someone's screwing with our weather. My winter anorak is still in the wardrobe.

El Niño responsible for Californian drought? Bear in mind some of the comments maybe skewed, if not downright porky pies.