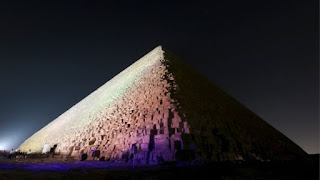 Scientists carrying out a new survey of the Egyptian pyramids have made an unexpected discovery. The unimaginatively named "Operation Scan Pyramids" began on the 25th of October and will take more than a year. The study will attempt to detect radiation emitted from the ancient monuments on the plateau in , including that at the infrared wavelength range which indicates a heat source. They have already published some of their perplexing results. Three constituent blocks at the base of the Great Pyramid, or the Pyramid of Khufu, are considerably warmer than those surrounding them. This could be due to the presence of different building materials or air currents within the structure, but it could indicate the existence of a void inside the monument. Source: http://www.msn.com/en-us/news/world/mystery-heat-spots-found-in-pyramids/ar-CCaWwK?ocid=twmsn. This is extremely interesting because it has long been speculated that the known passageways and chambers within the Pyramid are not the only ones. The pyramids of have been broken into several times during their four-and-a-half millennia history, mostly in the hope of finding golden jewels like those in King Tutankhamen's tomb in the . There are a number of rooms within the building given names such as the "King's Chamber", "Queen's Chamber", "Antechamber", "Grand Gallery" and the "Abyss". These are connected by corridors that are clearly intended for people to walk along, although some areas were sealed by stone blocks and had to be broken up to allow access. The latest of these closed routes was discovered in 1872 by the Scottish archaeologist and engineer Waynman Dixon. used a hammer to detect an empty space behind the wall of the King's Chamber by sonic resonance. He broke through the wall and found a horizontal shaft leading away from the chamber. Unfortunately it was only eight inches across and bent upwards after about six feet. He found another shaft on the opposite wall of the chamber. These shafts both exited the outside of the pyramid further up the structure and he guessed went there in a straight line. This is why they were originally thought to be ventilation ducts of some kind. Then turned his attention to the Queen's chamber and found similar shafts, but these did not exit the monument's exterior. He designed a tool with an extended handle, like a chimney sweep's brush, to probe the shafts and he found some artefacts; a copper hook of some kind and a wooden stick, but his own tool broke off while inside the shaft and he could make no further progress. We would have to wait a hundred and twenty years before a new adventure into these enigmatic shafts could commence. In 1992 a German engineer called Rudolf Gantenbrink designed a special robot to travel along the shafts. He found one of the shafts from the Queen's Chamber blocked by a stone door with what looked like metal clasps. Beside the door some crude marks had been painted on the walls. These are most likely the numbers 100, 20 and 1 in Egyptian hieroglyphics. This would make sense because the shaft at that point was 121 royal cubits in length, the unit of measurement ancient Egyptians used, equal to about twenty inches. This must mean the marks are the work of the pyramid builders. Gantenbrink's successors, the Djedi (pronounced "Jedi" as in Star Wars) Project redesigned the robot with a drill and it made a hole through what was now known as "Gantenbrink's door" and inserted a pinhole camera. The image that came back was frustrating; it showed merely a continuation of the shaft for a foot or so, and then a second obstructing block. The other shaft, on the opposite wall from the Queen's Chamber, bends sharply to the left after about forty feet to avoid the Grand Gallery, too sharply for the robot to move round, and more refits to the remote explorer were necessary, but eventually the archaeologists found a second door just like the one in the first shaft, see: https://www.youtube.com/watch?v=e2XxOPo0Gcc. (Graham Hancock suspects that some fraud took place and that the second shaft's door does not exist and the photographs of it are merely copies of those of the first door, see: http://grahamhancock.com/phorum/read.php?1,86354,86393.)

This is where research has halted. After this, a much larger hole would need to be made in Gantenbrink's door to allow any vehicle through, or the door would need to be removed altogether. There is no means at present to achieve that. It's reasonable to suppose that there are indeed unknown formations inside the Great Pyramid; after all some of the presently known ones were originally sealed off. If so what are they? What might lie inside any secret isolated chambers deep within that giant stone edifice? The problems of discovery are not just technological; they are political. The academic authorities in have often resisted any innovative ideas related to the complex. For years this establishment was personified in the form of Dr Zahi Hawass, 's Minster for Antiquities. Gantenbrink reports how Hawass was very uncooperative and obstructive with his project. Here he is getting angry at a debate with Graham Hancock and Robert Bauval, see: https://www.youtube.com/watch?v=8Ziu2ygE_Wc. A while ago I also covered the potential plight of the Egyptologist Anna Garnett and the mysterious moving statue in the , see: http://hpanwo-voice.blogspot.co.uk/2013/06/egyptian-statue-moving.html. Luckily nothing untoward has happened to her career-wise as a result of her outspoken interview on BBC News. The authorities are clearly very upset over these new ideas to do with the history and spirituality of and, by extension, the world. They censor and vet anything going on that might upset their familiar apple cart. However, with the addition of this new evidence of thermal radiation coming from inside the Great Pyramid, how can they realistically maintain the false narrative this time?
See here for background: http://hpanwo-voice.blogspot.co.uk/2014/05/strange-new-discoveries-in-egypt.html.
And: http://hpanwo.blogspot.co.uk/2009/10/probe-autumn-2009-part-4.html.
And: http://hpanwo-voice.blogspot.co.uk/2012/09/pyramids-in-antarctica.html.
And: http://hpanwo-radio.blogspot.co.uk/2013/10/the-ben-emlyn-jones-show-programme-10.html.
Posted by Ben Emlyn-Jones at 18:52