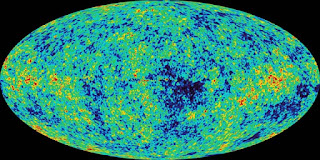 The Large Hadron Collider experiment at CERN has recently been boasting that they are on the brink of discovering the first scientific evidence that a parallel universe exists. I cover this in more detail in the background links at the bottom. However a cosmologist called Dr Ranga-Ram Chary has published a paper claiming to have beaten them to it. Ever since theoretical physicists reluctantly admitted that our universe could not possibly be the only one and that their equations only tallied if they took into account the presence of other universes, the question has been: "Could we ever actually see one of these parallel universes?" The best hope came from the atom-smashers because they have the power to bore holes in the fabric of the universal membrane and so expose the wonders of hyperspace to scientific scrutiny (and God knows what else!). Nobody expected that all we'd have to do is look up. The road to this discovery began with the launch of the Planck space telescope. One of its missions was to map the CMB, cosmic microwave background. This is a residual field of radiation left over from the Big Bang. The CMB was first discovered in 1964, but it was only in recent years that it's been analyzed in details. There have been a few surprises; instead of being uniform and homogenous, it has patches of higher or lower intensity indicating that there was some flux and irregularity with the initial creation moment of the universe. This means that when put on a colour-coded graph there is this mottled effect, see illustration above. This is what the universe actually looked like when it was just a few hundred thousand years old. The Planck study has created the most precise map of the CMB ever and Dr Chary discovered a strange element of it; a patch of colder radiation about ten degrees across which has been called "the bruise". This nickname indicates that it's the product of some kind of impact. The model depicts the three dimensional universal membranes as huge bubbles floating in a higher dimensional plain. This plain is not steady, but vibrant and active. Sometimes different universes brush into and collide with each other. This brilliant documentary explains the situation very well: https://www.youtube.com/watch?v=l6XMkapGgBo. Source: https://www.newscientist.com/article/mystery-bright-spots-could-be-first-glimpse-of-another-universe/. Here is Dr Chary's paper; it contains a lot of technical language and you'll need to know something about physics to understand it: http://arxiv.org/abs/1510.00126. The paper has been subjected to a peer-review, like all scientific publications, and it has inevitably gathered detractors. Prof. David Spergel, an astrophysicist who worked on the WMAP-Wilkinson Microwave Anisotropy Probe, a previous mission to observe the CMB, says that Dr Chary has measured the radiation wrongly. Prof. Spergel claims that material in the foreground, like stars, galaxies and cosmic dust, absorbed some of the radiation causing it to appear absent from the CMB scan; Dr Chary failed to control for this. Prof. Joe Silk, an astronomer at , simply calls Chary's discovery an "artifact caused by foregrounds", but doesn't go into details. If this does turn out to be a real indication of the presence, albeit in the distant past, of an alternate three-D universal structure, then it will be an incredible revelation. However, something tells me that it will not lead to the cancellation of the LHC at CERN because that has another purpose, see background links below. I wonder if paranormal phenomena like ghosts and UFO's are a manifestation of this bleed-over from beyond the visible and comprehensible. Maybe such interactions are still going on spontaneously. For example see: http://hpanwo-tv.blogspot.co.uk/2015/05/stargate-brighton.html.
See here for background: http://hpanwo-tv.blogspot.co.uk/2015/07/cern-progress-or-apocalypse.html.
And: http://hpanwo-radio.blogspot.co.uk/2015/06/programme-142-podcast-cern-special.html.
And: http://hpanwo-voice.blogspot.co.uk/2015/10/cern-breaking-through-veil.html.
Posted by Ben Emlyn-Jones at 19:13

Halton Arp a cosmologist found that the Cosmic Background Radiation was uneven and young galaxies were next door to old ones so the expanding universe view, big bang etc might not be right. The big bang was a theological theory originally, the cause of the big bang being God or consciousness. This is why the multiple universe theory is popular, to avoid the uncomfortable idea that this universe is cosmologically perfect for life for a reason, instead we can pretend it is an accident amongst many random universes. Anyway, great articles as usual, thanks. 😊 Leon

Leon is correct in his assessment (above). The multiverse is a neo-atheist attempt to explain the precise balance of the observable Universe. One only need look at it's proponents to see this not to mention that the theory remains unprovable. CERN is a testament to the lengths they will go to.

I wish more replies were like the two above replies (Anonymous and Laurence) constructive. The age old issues are always bound to raise their head, built around the ever fluctuating Scientific measurements, findings and theories alongside the God-Atheistic situatiuon. When venturing into quantum mechanics I find that sometimes these archaic and progressive constructs are often not arguments to worry about, refute or propose staticly because some scientists astutely treat the quantum wave function as a reflection of ignorance.

What CERN may 'aquire' or not quire may well face an equally interesting proposition that may lead us toward techniques that have spanned the centuries without loosing their power, namely how we utilize the conscious 'will' that observes scientific proposals and theories that reveal that it's possible the Western dichotomy between 'empirical reality' and psychological images may be exaggerated or even false. The aforementioned quantam theory is an Interesting hypothesis on the 'reality' proposed and reminds me of a quote by Huángbò Xīyùna (Huang Po) a Ch'an master who died in 850 AD who once stated:

The intuitive apprehension of scientific findings may welll be the new tool we need to bring into play, but it may not be 'by means-of' that we truly see, this could be depending on falsity (Ambivilant consciousness) which is limited by Inverted/Egocentric awareness that is connected to the nervous system which (as stated by REA Johansson in The Dynamic Psychology of Early Buddhism & The One Reality) 'has the power and resources to create images from external (and scientifically quantifiable) patterns of information or/and from information stored in the same nervous system. They then give it meaning.' These experiences that we measure via science may be the 'patterned processes themselves in the nervous system, maybe within special association centres.'

In this case they would all be part of the same 'reality as all processes, physiological or physical. Conversely, Huang Po also stated that equally just to insinuate that the reflections & distinctions of the objective sphere are nothing to wise discourse (merely dismissing the world of nature-objects as not existing or never totally calculable) further stated "how much less can we utilise these objective reflections?."

Neo-Atheism, God quantifiable Science theory, Post-Modernism are all terms that describe the age old standpoints as we enter an epoch where scientific 'givens'that we have relied on for the huge and sudden burst of materialistic-science (bolstered by it's success) begin to come into question.................... Perhaps these possible 'parallel universes' are the first flickers of this

Perhaps this has implications for your new book Ben!

Thanks for your comments. guys. I like Stephen King's book "The Langoliers" which suggests time might have a second dimension.

The excellent comment of Xylomet is deserving of a more considered response than I would be able to manage, as I tend to short-circuit discussions of this sort by quoting Aquinas on infinity. However, I can say that Xylomet's final paragraph has the ring of Truth about it as it neatly explains the present day tendency, however ill-considered and expedient, to set (materialist) science against age old Truths about Man's discernment of his place in Creation, the eponymous Universe.