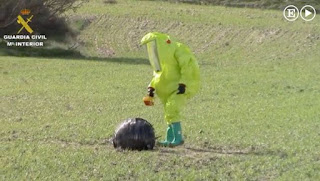 On November the 5th, Juan Francisco, a goat farmer, found a mysterious spherical object lying in his field. It was metallic, about three feet across and weighed forty-four pounds; therefore if it was made of metal it must have been hollow or filled with a far lighter material. The authorities where the event happened, at Callasparra in the region of , took the matter very seriously and sealed off the area. Decontamination experts in full nuclear-biological-chemical protection suits went into the field and examined the object. It was obvious that it had fallen from the sky, but it was quickly declared completely safe. The people who found it quipped that it resembled the "IT-O interrogator droid" from the movie Star Wars Episode IV- a New Hope. It was described by the Spanish Guardia Civil authority as an "aerospace artefact", a piece of space junk, possibly a gas canister from a rocket or satellite, and they've taken it away for further analysis. This could serve as a satisfactory explanation; however more of these falling black balls were reported soon afterwards. Another fell at , also in 's region. If they are just space junk it seems an odd coincidence for them to come down so close together; and they have survived their fall from space very well. Space junk often drifts back to earth after orbiting the planet for a while. However it rarely reaches the surface intact. It's usually burned in the atmosphere or smashed to pieces on impact. The local people have started calling these objects bolas espacial- "space balls" and are quite alarmed by them. There has also been UFO activity reported in the area and a UFO was photographed at the seaside. Jose Velez, the mayor of Callasparra said: "I think it is a more serious issue than it seems. Citizens have real concerns about what is happening and deserve an explanation." The government laboratory examining the spheres has yet to release its results. Source: http://mysteriousuniverse.org/2015/11/third-sphere-falls-in-spain-area-put-under-quarantine/. Interestingly a few days earlier in Kingston-upon-Thames, a borough within the borders of Greater London, a member of the public reported to the police that a mysterious object had appeared on Malden Road, near the junction with South Lane. It was lying in the middle of the road by a pedestrian crossing and was spotted at around . According to initial reports, it was on fire; so the police alerted the fire brigade. The object was multicoloured and dome shaped; it was upside down and causing an obstruction to traffic. After they had removed the object, the police announced that it was a pizza oven. The multicoloured parts were terracotta tiles covering a clay exterior. That's what it looks like to me too, but I'll ask my friend and fellow researcher Richard Wright who is the founder of Exopolitics Kingston-upon-Thames, see: http://hpanwo-radio.blogspot.co.uk/2015/02/programme-123-podcast-richard-wright.html. Nobody saw it being dumped and so nobody knew where it had come from. Despite this phenomenon probably not being a real UFO, it's interesting that the media covered it as such, albeit in a novelty manner. In fact even the police themselves had a chuckle about it. Their official online report card read: "Have Police recovered the first UFO!? Last night at around midnight a concerned member of the public called us on 999 stating that there was an unknown item on fire in the middle of the road. Officers from Emergency Response Team A were dispatched along with the Fire Brigade. When they arrived on scene they couldn't believe their eyes! The officers that arrived on scene described the item as looking like a crash-landed UFO! Can you work out what the item is from the picture? Comment below with your guesses! However on a serious note, anyone with information about this item and how it ended up being there please do contact us on 101 and quote CAD: 525/17OCT15." It just goes to show how popular the notion of UFO crash-retrievals has become in our culture; and that's a good thing. I imagine by now the police have apprehended the phantom pizza oven fly-tipper. One doesn't need to be Inspector Morse to realize that knocking on the doors of the nearby Italian restaurants would be an obvious first step in the inquiry. Source: http://metro.co.uk/2015/10/19/dont-panic-but-a-ufo-has-just-crash-landed-in-west-london-5448919/.
See here for background: http://hpanwo-radio.blogspot.co.uk/2015/11/programme-161-podcast-probe-conference.html.
And: http://hpanwo-voice.blogspot.co.uk/2013/09/fake-roswell-at-school.html.
And: http://hpanwo-voice.blogspot.co.uk/2015/04/crashed-ufo-in-antarctica.html.
And: http://hpanwo-voice.blogspot.co.uk/2015/04/disclosure-champagne.html.
Posted by Ben Emlyn-Jones at 18:45