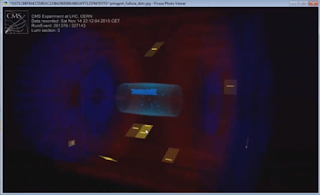 According to reports from a supposed whistleblower in CERN, there has been a major accident at the particle physics laboratory in . CERN, Conseil Européen pour la Recherche Nucléaire- "European Organization for Nuclear Research". It has been described as a "nuclear meltdown", although I'm not sure if this is meant literally. According to data illicitly obtained by the whistleblower on the CERN's internal computer network of the Large Hadron Collider, one of the detectors experienced an explosion which caused a twelve foot wide hole in the CMS experiment. This allegedly caused the computer systems to crash and the control room was evacuated. At the same moment a large white UFO appeared over the nearby hills above the laboratory and a spontaneous waterspout appeared on . These were both photographed. Some people have since claimed that the waterspout is a giant ornamental fountain called Jet d'Eau and it erupts every day on the lake. However this picture appears to show it in a different place to library shots of the fountain. My friend and fellow researcher Miles Johnston did an interview with Her Grace Karen MacDonald and Sgt Daniel Brad McBolen III about it: https://www.youtube.com/watch?v=ye0Zrqq3Gck. Everything appears normal on CERN's official media platforms, for example see: http://home.cern/. According to Dan, Her Grace and their colleagues Patty Brassard, their whistleblower says that the terrorist attacks in facilitated the cover-up of the disaster at the Large Hadron Collider. "Draco ET's" have apparently been released into this universe as a result of the explosion. As bizarre and implausible as this report might sound, there may well be some truth behind it, for reasons I explain in detail in the background links below. I do suspect one of the real purposes for the LHC is to break through the spacetime walls of our cosmos in order to create a breach into other universes. This is not the first time that activities at CERN have possibility produced anomalous phenomena. A photographer in the back in June took a shot of what they suspect is a wormhole caused by the LHC collisions, see: http://removingtheshackles.blogspot.co.uk/2015/06/could-ufo-sighting-be-sign-cern-has.html. It could be just that. To me it looks like the Spiral... that was definitely not a Buleva missile test. A similar object has been seen in . There's nothing I can see that specifically links these aerial vortices to the LHC, but they would be what we'd expect to manifest. Maybe Olaf Thomas Raabe can calculate the temporal and spatial offset to link them to the LHC; see background links below for details.
See here for background: http://hpanwo-tv.blogspot.co.uk/2015/07/cern-progress-or-apocalypse.html.
And: http://hpanwo-radio.blogspot.co.uk/2015/06/programme-142-podcast-cern-special.html.
And: http://hpanwo-voice.blogspot.co.uk/2015/10/cern-breaking-through-veil.html.
Posted by Ben Emlyn-Jones at 16:47