Will Tim Peake see a UFO? 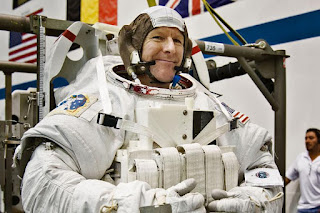 Today a Soyuz FG rocket blasted off from the Baikonur Cosmodrome space centre in carrying a man called Maj. Tim Peake who has been called "'s first astronaut". This is not completely true, in the sense that he's not literally the first Briton in space; however the person who holds that honour, Helen Sharman, was a designated passenger only on the technicalities of space exploration. Unlike his compatriot predecessor, Tim Peake is trained as an active crew-member of a spacecraft. (However I'm sure there are many British people who've been into space secretly, before and since, but that's a story for another time). After years of training, "Major Tim" as he has been dubbed (Just wait for the inevitable cover version of David Bowie's Space Oddity to hit the charts) is now in space. His parents, along with his wife Rebecca and their two sons, watched the rocket ascend from the same launch pad that the first man in space (supposedly), Yuri Gagarin, did on . People all over the world have been cheering him on and there was a live screening of the launch at the where some of the children came dressed as astronauts. In Tim's hometown of , , a big party is in full swing. The Soyuz TMA orbital stage has been heading up to the International Space Station where, at about this afternoon, it docked in order to drop off Tim and his two crewmates for a six month mission on board the space station. I wish him all the best. Source: http://www.bbc.co.uk/news/science-environment-35101643.

When he comes back to Earth I'll have to get in touch with him and ask him a key question: Tim, did you see a UFO while you were up in space? This might seem a strange thing to do. Astronauts are highly-trained sober and rational professionals whose mental health is very carefully screened; why would they see UFO's? However this hypothetical question is made moot by a far simpler actual one: Do astronauts see UFO's up in space? The answer is yes. Some have spoken openly about it like Buzz Aldrin, Gennady Strekalov and Col. Gordon Cooper. Despite this, NASA, Roscosmos, the ESA and all other government space agencies' official position on UFO's is that there is no evidence they exist. As the Disclosure Petition II revealed, this is a lie, see: http://hpanwo-tv.blogspot.co.uk/2012/05/what-happened-to-disclosure-petition-ii.html. There are other reasons to suspect that the presence of UFO's in space is being deliberately suppressed. Occasionally strange objects are picked up by approved space footage and the commentary by the astronauts on the scene and mission control is curious. They carefully avoid mentioning the phenomenon and sometimes you'll hear mission control asking the astronauts to alter their radio settings and then they go quiet; occasionally the live feed will also suddenly "go down" due to "technical problems". Here's a good example: https://www.youtube.com/watch?v=IiDvkB_rG-Q. This indicates that the astronauts have a separate private communications channel, one that is probably encrypted, for discussing classified issues. So then they must be briefed in to the subject of UFO's and how to deal with them when they appear; including keeping them secret from the media and viewing public. UFO's probably have the status of an "open secret" within the space-faring community. There are a few instances when an astronaut exhibits behaviour that reveals they have not yet been initiated into this open secret. In November 2014 the Italian astronaut Samantha Cristoforetti was involved in a spacewalk outside the ISS when she experienced something that shocked her into gasping and yelling: "Oh my God! Oh my God! Oh my God!..." What's even more interesting is the response of the man assisting her on the EVA. Her Russian colleague does not react to the phenomenon and immediately orders her to be silent. Is he used to such things? Has he been warned beforehand that UFO's sometimes appear and that he should keep that to himself? When this incident occurred, Samantha Cristoforetti was new on the space station and clearly nobody had yet had the chance to take her to one side and have a quiet word: "Samantha... erm... there's a few things you need to know..." Tim Peake is a sane, expert and professional astronaut, but so is Samantha Cristoforetti and she was not included into the circle of those in the know... at least she wasn't at first; obviously she is now. Perhaps Tim Peake knows nothing about the UFO scene up there yet either. In which case, we should watch out for a similar exclamation for Tim as we had from Samantha, albeit perhaps a more masculine, British, stiff-upper-lipped: "Good Heavens above!"
See here for a related article: http://hpanwo-voice.blogspot.co.uk/2015/02/man-on-mars-in-this-decade.html.
Posted by Ben Emlyn-Jones at 18:20

I hope Tim sees a UFO up there but apropos my recent sighting down here, I came across a curious report filed by the Wicklow Mountain rescue 5 days before my own sighting. (You may remember the UFO over the eastern side of the Wicklow Mountains that I described under a previous HPANWO post).

I should point out that the eponymous 'Kippure Mountain' is immediately adjacent to the location of my sighting.

Yes, I recall you posting it, Laurence. I wonder if those really were just torch flashes.

Seems unlikely Ben. I know Kippure Mountain well. The very high mast at the top, which must be 125 m in length at the very least, is serviced by a well maintained tarmac road incorporating crash barriers on the steep section near the top; viz. it would be inconceivable that someone could get lost in clear conditions. The other possibility, i.e. that there was an injury, is unlikely as the mountain rescue, highly trained professionals that they are, would have found the injured party.

Moreover, I failed to mention that yesterday (16th December) I observed what appeared to be an Irish Air Corps Agusta Westland AW139 helicopter or similar conducting a search of the sighting area. I observed the helicopter for over an hour and I know they stayed for at least 2 to 3 hours moving in a zig-zag pattern over the sighting area, sweeping around in an arc and searching again. Yesterday evening I did my own online search for reported incidents that could explain the heli but nothing was mentioned, except the curious incident on Kippure. A lot of resources (as you would know better than anyone Ben) have been invested already on apparent wild goose chases!

This sounds like a legitimate case though, Laurence. you've made an effort to investigate and identify the object before reporting it as a UFO. The military presence is another clue. It's possible the object was picked up on radar and that's why the helicopter was searching there.

Hello Ben, apologies for resurrecting this story but it is very relevant to the Pentyrch case (apropos HPANWO TV, November 12, 2018) that occurred around the same time!