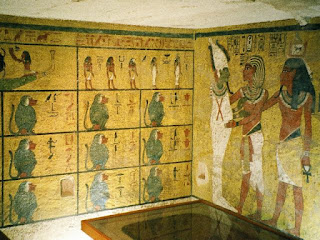 Egyptologists have announced that there might be more to the famous tomb of the pharaoh Tutankhamen than meets the eye. When the archaeologist Howard Carter first discovered the underground mausoleum in 1922 he could hardly believe what he found inside. The body that lay in the sarcophagus was covered by a mask of solid gold and in adjoining room was a collection priceless jewellery. The pictures and hieroglyphic inscriptions on the wall announced that this was the final resting place of the pharaoh Tutankhamen, who had died in 1323 BC at the tender age of eighteen after a short life of ill health. The mummy's lineage was confirmed by DNA tests many years later; he was the son of the mummy thought to be his father, the pharaoh Akhenaton. (Strangely many of the members of Carter's team died of a mysterious disease a short time later; were they cursed by the spirit of the king? Some people do take seriously the spiritual influence of Ancient Egypt, see: http://hpanwo-voice.blogspot.co.uk/2013/06/egyptian-statue-moving.html) One of the enduring mysteries in Egyptology is the location of Tutankhamen's stepmother Queen Nefertiti "the Queen of the ". A number of statues of her were found near the tomb of her husband Akhenaton, but no body. However, new tests carried out by the archaeologist Dr Nicholas Reeves indicate that there might be a previously undiscovered chamber in the tomb. He worked this out by scanning one of the walls of the burial chamber with radar. There is what appears to be an empty space covered over with the wall slab. This is quite common in Egyptian monuments; in fact some chambers and passageways of the pyramids were found behind apparently blank walls that had to be broken through. Dr Reeves has suggested using ground penetrating radar above the site to see if there are any spaces close to the known areas of the tomb. If the presence of another chamber is confirmed, will it be excavated? It's possible that the damage done to the wall of the burial chamber might not be considered worth it, especially if a hole has to be made that will destroy the beautiful mural. They might design a miniature robot and drill a hole for it to go through. I wonder if the operation will be on live TV again. However, as I say in the background links below, whatever is found will be vetted before being released to the public. How much will we be told about it, and will what we're told be the truth? It is early days yet, but I'll report back if there are any developments. Source: http://www.academia.edu/14406398/The_Burial_of_Nefertiti_2015_/.
See here for background: http://hpanwo-voice.blogspot.co.uk/2015/11/pyramid-thermal-mystery.html.
And: http://hpanwo-voice.blogspot.co.uk/2015/11/ben-emlyn-jones-on-enemy-within-radio-18.html.
And: http://hpanwo-voice.blogspot.co.uk/2014/05/strange-new-discoveries-in-egypt.html.
Posted by Ben Emlyn-Jones at 18:10