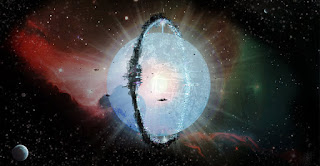 Somebody recently wrote to me asking if SETI is cointelpro. SETI- the Search for ExtraTerrestrial Intelligence, not to be confused with Dr Steven Greer's CSETI, is a collective name for a number of different projects, past and present, that hope to find intelligent life out in space by picking up their radio signals, see: http://www.seti.org/. Apart from on earth, nothing of the kind has been found in our solar system (that we've been told about) so SETI has turned its attention to other stars and exoplanets, planets which orbit stars other than the sun. There have only been two occasions when the scientists have really thought they'd found what they were looking for. The first was in 1967 when the radio-astronomer Susan Jocelyn Bell picked up a regular pattern of pulses from far out in the universe. She even called it "LGM- Little Green Men", but it turned out to be a natural object, a new kind of star called a pulsar. However ten years later another radio-astronomer, Jerry Ehman, captured a signal so atypical he thought it had to be artificial, and he even wrote the notation "Wow!" on the data sheet. Unlike the LGM's the "Wow!" signal has remained unsolved since its discovery in 1977. That's all that has been discovered so far (that has been publicly admitted). However one of the pioneers of SETI, Dr Frank Drake, has designed an equation which makes it theoretically very likely that the project will meet with success someday. SETI has been made famous by the novel Contact by Carl Sagan which was made into a film staring Jodie Foster who plays a radio-astronomer who detects a real intelligent signal from a distant star. One thing all SETI scientists and aficionados have in common is that they dismiss the UFO phenomenon. Carl Sagan used to be particularly scathing in his rebuffing of UFO's. This is understandable because belief in UFO's would make their project redundant, for obvious reasons. What's the point of scanning the sky for alien life forms if they're already down here with us? However, I don't think an interest in both subjects is completely incompatible. If so, why am I interested in both?

Is SETI a controlled response for the UFO cover-up? I'm not sure. In my view, it's probably more likely that SETI is an innocent institution. This is not to say that it would not be welcomed by the people behind the ET truth embargo, because it happens to be giving out the message to the public that they want. Maybe some of its funding comes from members of what Richard Dolan calls the breakaway civilization. Despite the claim that radio-astronomy has not achieved what it set out to, some intriguing evidence has emerged from the world of optical astronomy. The Kepler space telescope was designed to detect planets orbiting distant stars and it does this by analyzing the light coming off the stars to see if there are objects in orbit eclipsing them or altering their orbit and rotation. It has so far examined 150,000 stars and found a number of planets. However scientists working on the Kepler space telescope have announced that there's something very weird going on with a particular star on the cusp between the northern constellations of Lyra and Cygnus. This star is about 1400 light years away and cannot be seen by the naked eye and it's just a point of light through most telescopes, but Kepler can pick out details. The star is surrounded by a collection of multiple objects. This is common in young stars newly formed because the gas and dust orbiting them hasn't settled down into solid planets yet, however the star in question is a mature one whose planets should be fully formed by now. It is a unique profile that hasn't appeared in any of the other 150,000 stars they've studied. "We’ve never seen anything like this star... It was really weird. We thought it might be bad data or movement on the spacecraft, but everything checked out." said Tabetha Boyajian, one of the Kepler scientific team. She is one of a number of astronomers who have published a paper describing what they know so far, see: http://arxiv.org/pdf/1509.03622v1.pdf. The only "rational explanation" she can come up with is that another star recently transited the solar system of the star in question dragging a cluster of comets behind it and these comets are the objects Kepler has detected. However, she admits this is extraordinarily unlikely. For a start, they can't seem to find the star that passed through; and it's an astronomical coincidence, literally and figuratively, either way. A journalist contacted Dr Boyajian and she said that she and her colleague Jason Wright were considering "other scenarios" that were not mentioned in the paper. Some SETI theorists have speculated over whether signs of an intelligent extraterrestrial life form could be seen from earth simply by examining their home solar system. If these life forms were very technologically advanced, far more so than modern humans, then they might be able to build artificial structures in space big enough to be seen from other worlds light years away. Maybe they would find a way to put huge solar panels in space to suck up energy from their sun. Therefore SETI explorers should look out for these features when examining distant stars. Dr Boyajian and Dr Wright say that the Kepler data on this star match this theorized feature. Dr Wright said: "Aliens should always be the very last hypothesis you consider, but this looked like something you would expect an alien civilization to build." I don't know why aliens should be the last hypothesis that should be considered. According to whose principle? If the data matches the theory, why be shy? Why did Dr Boyajian omit this possibility from her paper? It goes to show how culturally taboo the concept of ET life is. It's got nothing to do with science; it's to do with what is psychologically acceptable; for distinct political reasons I think. Anyway, work on this bizarre stellar anomaly is going to continue. SETI now have a proposal to point the VLA- Very Large Array radio-telescope at the star and see if it's giving off any alien radio transmissions. This study could begin as early as the New Year, but could take a number of months to complete. Source: http://www.theatlantic.com/science/archive/2015/10/the-most-interesting-star-in-our-galaxy/410023/. Dr Boyajian's team goes on to say: "Until then we will have to content ourselves with longing looks at the sky, aimed between the swan and the lyre; where maybe, just maybe, someone is looking back, and seeing the sun dim ever so slightly, every 365 days." I wonder if they'll find anything. They may find nothing at all. But if they do, you'll be sure to hear about it first on HPANWO Voice; watch this space... Then again, what if they do find something and an unknown suited man steps into the control room and warns them to keep quiet about it, or else?
See here for background: http://hpanwo-voice.blogspot.co.uk/2015/12/will-tim-peake-see-ufo.html.
And: http://hpanwo-voice.blogspot.co.uk/2012/11/bbc-blocks-brian-cox-over-alien-fears.html.
And: http://hpanwo-voice.blogspot.co.uk/2012/10/bbc-conspiracy-road-trip-ufos.html.
Posted by Ben Emlyn-Jones at 18:55

I've been following this story along with the Ceres Lights and I really hope this is the one discovery that finally shatters the truth embargo. I've very leery of them - 'Nature' magazine for one, conveniently frittering away the Ceres data for a while and then announcing what seems to me to be a concocted proposal of the lights being magnesium sulphate in origin. As if they couldn't have reached such a mundane chemical explanation much earlier. My intuition screams at me that the Ceres Lights are much more, literally shining out a message which is falling on deaf ears and blind eyes as usual. As well as indoctrination by 'science', the public's apathetic attitude to these potential wonders is also part of the equation. But with this Kepler discovery, it seems they're stalling to trot out another mundane explanation - again - wouldn't a comet field have been considered MUCH earlier? Sounds like desparation, unless - this is all a part of the excrutiatingly slow-drip disclosure as postulated recently.

I've heard that the lights on Ceres are ice! And now it's all gone quiet. It is bloody desperation. They are trying to uphold the original mandate imposed at the start of the space programme in 1959 by the Brookings Institute. How much longer will it work? Thanks for your comment, Gigerbite