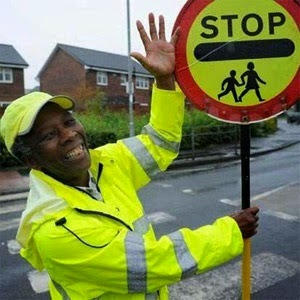 Nkosana Mdikane is a seventy-four year old School Crossing Patrolman, a "lollipop man" as they are known because of the shape of their portable warning sign. Their job is to help children cross the road on their way to and from school by stopping the traffic. Originally from , Mr Mdikane now lives in and is renowned to all for his cheery personality. He dances and sings as he works and greets the children with a high-five handslap. His disposition has made him very popular with the local people and school pupils and their parents look forward to seeing him every day. But now his employers, West Dunbartonshire Council, have banned him from doing this. They said his mannerisms stopped him from concentrating on his job; they added: " Crossing Patrolmen and women are instructed when crossing children over a road to remain static with one hand on their sign and the other stretched outwards. This ensures that they can be seen and effectively provides a barrier between school pupils and the traffic... This is national guidance and has been the case for a number of years." The response from the parents and children who know him has been outrage. They have formed a petition, see: https://www.change.org/p/west-dunbartonshire-council-reverse-the-decision-to-allow-our-lollipop-man-to-give-high-fives, and a Facebook group: https://www.facebook.com/Savethehighfives?ref=profile. They say: "Our lollipop man has been told to stop giving our kids a high-five when they are crossing the road to school.  The kids are so disappointed with this decision. He encourages our kids to cross with him; they never cross without the crossing. The traffic is always stopped.   A few years ago he was in the press as ''s Happiest Lollipop Man!' We want Council to reverse this stupid decision."

Regular HPANWO-readers will be able to guess what I think of this matter. In 1994 David Icke wrote a book called The Robots Rebellion, and it's stories like this one that make me realize how apt the title is. We are human beings, but we're ruled by an elite that has lost its humanity, if it ever even had any. They want us to become like them, heartless, soulless machines which carry out orders and obey rules; perfect citizens for the New World Order. This agenda operates on many levels. On the one hand you have a typically stupid local government nanny state rule. But it's far more sinister than just silly red tape or the fear of getting sued. It's about creating a new kind of person, a person without thoughts, without emotion. Everywhere you turn in today's world there's more and more mind-numbing, heart-wrenching uniformity, confusion and oppression. As Andy Thomas said: "Everything is designed to break out spirit!" In Charlie Chaplin's wonderful speech at the end of his film The Great Dictator he utters words that describe our situation perfectly: "Don't give yourselves to these unnatural men, machine men with machine minds and machine hearts! You are not machines!... You are men! You have the love of humanity in your hearts. You don't hate; only the unloved hate, the unloved and the unnatural..." (See: http://hpanwo.blogspot.co.uk/2007/12/charlie-chaplin-breaks-his-silence.html). These words illustrate so well the conflict between Mr Mdikane's personality and the psychopathic elite together with the robotic minions who mindlessly do their bidding, like West Dunbartonshire Council. Mr Mdikane has decided to comply with his employer's instructions and I don't wish to pass judgement on him for his decision. He now behaves normally when he sees his friends, the parents and children outside the school he tends. They're clearly saddened by this and want the council to reverse its decision. So do I; I've signed the petition and liked the Facebook page. No doubt he still smiles and speaks warmly to them. There is no rule against that at least... well, not yet! I myself hope very much that this will turn out the way the kids and parents want and Mr Ndikane can return to expressing his kindness, uniqueness and free spirit. I take hope by returning once more to the words of Charlie Chapin in his speech: "...The very nature of these inventions cries out for the goodness in men, cries out for universal brotherhood for the unity of us all. Even now my voice is reaching millions throughout the world, millions of despairing men, women, and little children... To those who can hear me I say, 'Do not despair.' The misery that is now upon us is but the passing of greed, the bitterness of men who fear the way of human progress. The hate of men will pass and dictators die; and the power they took from the people will return to the people and so long as men die, liberty will never perish.... Don't fight for slavery! Fight for liberty!... You the people have the power to make this life free and beautiful, to make this life a wonderful adventure... Let us fight for a new world, a decent world... a world of reason, a world where science and progress will lead to all men's happiness." Andy Thomas was right when he said that everything is designed to break our spirit. Our challenge is not to let it.
See here for a related story: http://hpanwo-tv.blogspot.co.uk/2011/03/but-they-aint-normal.html.
And: http://hpanwo-tv.blogspot.co.uk/2011/02/remember-your-place-in-workplace.html.
Posted by Ben Emlyn-Jones at 19:16

What next ... this man puts a smile on the wains faces 5days a week .. makes sure they are not injured crossing the road and his bosses talk about mannerisms ....

They always target men like him and not violent corrupt policeman