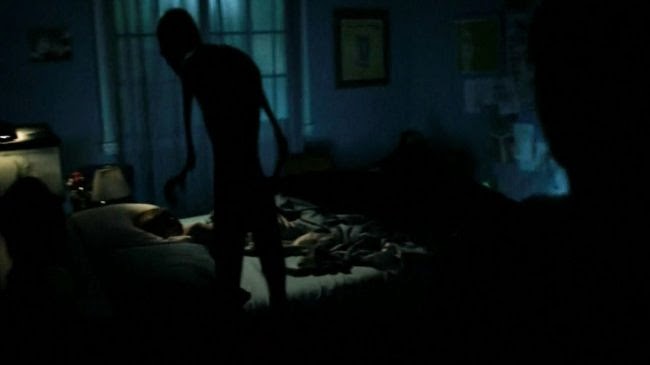 Last week I woke up naturally. I wasn't working early so had not set my alarm clock. However, as I emerged from my dreams and opened my eyes I found I couldn't move. My entire body was paralyzed except my eyes. I looked around myself and recognized my bedroom with morning light at the window filtered by the curtains. I struggled as I tried to move and wake up fully. It felt like trying to swim up though a pool of sticky mud. I popped awake with a jolt and sat up; I suddenly felt incredibly drowsy as if the force that had kept me asleep was trying to drag me back down into it again. This is something I experience regularly; it's alarming to go through. I once had it when I was visiting my girlfriend and was lying beside her in bed and she was awake. I called to her for help through my frozen lips and could hear my own voice; however when I finally did wake up she told me that I hadn't made a single sound. This happens to me about once a month, usually when I'm in a light sleep, in the early morning or when I'm napping. It's very common and known to doctors as "sleep paralysis". It's caused by the mechanisms in the body of sleep and wakefulness overlapping. There's a function in our brain which paralyses the skeletal muscles; this prevents us from physically moving in the way we do in our dreams; when this is not working people sleepwalk. Sometimes when we wake up, this paralysing mechanism continues to work when it shouldn't, leaving us wide awake but unable to move. For me this involves just a few minutes of discomfort every so often, but a few times this experience has taken on a sinister additional element. Last year I woke up to find myself in a state of paralysis as usual, but when I opened my eyes and looked around my familiar bedroom I saw that I was not alone. Standing beside my bed was a figure the size and shape of a tall man. It was dressed in a black hooded cowl that completely covered its head, yet it was turned towards me and I sensed that it was looking at me even though I couldn't see its face. Because my bedroom is quite small this being seemed to fill it up with its bulk. It resembled the ring-wraiths from JRR Tolkien's Lord of the Rings, see: https://www.youtube.com/watch?v=H3HRwoOs2FU. Obviously I felt an additional urgency in my struggle to escape sleep paralysis this time, and the moment I jerked awake properly the creature completely vanished. Since then I have encountered this shrouded ghoul on two other occasions. Every time it does the same thing, it just stands there are studies me; it never moves. What is it? The scientific view is simple; because I was only partly awake I was still dreaming and so my sensory input of the world outside became briefly blended with my inner landscape. I've been in this kind of state before without paralysis too; these are known as "hypnopompic experiences", see: https://www.youtube.com/watch?v=sk3c9hSYkqU.

Sufferers of sleep paralysis can be found all over the world and descriptions of the experience date back through all of history. The painting The Nightmare by Henry Fuseli from 1781 is a depiction of sleep paralysis, see background links at the bottom. Oddly enough wherever you go in the world, no matter what culture the sufferer comes from, they often report the same entities in their encounters. One of the most common is the "shadow man", a humanoid that is completely featureless, just a black shape often appearing two dimensional, like a cardboard cut-out; sometimes it wears clothing and a prominent hat. Such creatures are sometimes seen by people in waking life, see: http://hpanwo.blogspot.co.uk/2010/10/river-ghost.html. Another being that very regularly haunts people at night is called "the Night Hag". It resembles an elderly woman with a wizened and deformed face. It wears a ragged and dirty black dress and wears a broad-brimmed pointed hat. I find it interesting that the archetype of the Hag closely resembles the depiction of a witch, as in The Wizard of Oz and Walt Disney cartoons etc. I really should consider myself lucky because the hooded figure that stands over my bed just looks at me and doesn't harm me, whereas other people report being violently assaulted by these creatures. The Hag in particular has a reputation for extreme cruelty. It will sit on a victim's chest and attempt to stop their breathing; it is said to be very heavy. It will try to strangulate its victim, beat them with its hands or even sexually abuse them, whether they're male and female. The Hag has been reported in places far afield as , , , and ; in my view this calls into question the official explanation, that these experiences are simply our dreams overlying our waking life, a creation of our imagination. If so then why do people from many different places across the world all encounter the same beings in these experiences? For the official hypothesis to be true then there has to be a physiological explanation, which means that the brains of all human beings are hardwired to create the same images in these circumstances, regardless of their race and culture. How? And Why? Until that question is answered nobody should be criticized for postulating that the sleep paralysis hallucinations might have some objective reality; for me this theory should be taken seriously out of common sense alone. Also it ties in with other areas of research into the world of the spiritual. What goes for sleep paralysis could also apply to other kinds of unusual mental effects, such as psychedelic drug trips, see: http://hpanwo-voice.blogspot.co.uk/2014/09/fluoride-and-pineal.html. Sleep is an altered state of consciousness that we all experience every day. Our only memory of it comes from our dreams and phenomena like sleep paralysis, but it's like a visit to another world. Based on what I've learned, I think it's a world worth exploring. It's a world which may contain many horrors and dangers, see the background links below. However, within its borders lays the answer to something fundamental about who we are and the universe we live in.
See here for background: http://hpanwo-voice.blogspot.co.uk/2014/04/sleep-deprivation.html.
And: http://hpanwo-voice.blogspot.co.uk/2011/12/benylin-and-sleep-paralysis.html.
And: http://hpanwo.blogspot.co.uk/2011/11/london-skeptics-in-pub-141111.html.
And: http://hpanwo.blogspot.co.uk/2011/04/paranormality-by-prof-richard-wiseman.html.
Posted by Ben Emlyn-Jones at 19:02

In my experience, since a child, I have gleaned that upon wakening and not being able to move but able to move the eyes, it is because the astral body has not completely aligned itself with the physical. In my readings on the subject of astral projection, I have come across in some old books, this explanation. One needs to relax and go back to sleep. When wakening, I have always found myself fully functional again. In regards to the hooded ghoul - I have met him on many occasions in the astral. I have never seen his face and have always felt relaxed with him. He usually asks me if I would follow him, which I have always done. He then shows me some amazing things. On one occasion, taking me to the hospital bedside of a friend's father who had just suffered a heart attack (if I recall correctly). I watched a thin white whisp of smoke like material (his spirit?) leave his body. It was later confirmed I had watched him pass over at the exact time. I hope this is of some help

Thanks for sharing Ben, interesting yet a little disturbing for a lot of people. The so called 'macro-world' as experienced by the senses - interpreted by the mind - is deterministic and can be understood through a developed mind but underlying the obvious surface-level of the empircal world seems to be a free-flowing 'void' or creative emptiness (accessed by many individuals at certain points in history) that is neither form nor non-form where sub-atomic particles rise and pass in a non-deterministic
fashion.

The physical world of human existence seems to be both deterministic and non-deterministic and hence it seems although as Heisenberg states ‘nothing is certain’at this subatomic level things are ‘certain) at the macrocosmic-level in unturtored perception.

It seems dreams are a different things to different individuals and is even linked to people who seek to cultivate the mind be it meditaively or chemically. When we are awake, our thinking mind works but when
we sleep, dreams take the place of thoughts, perhaps, inbetween that is a portal of physical and projected consciousness from the storehouse of consciousness which is unlocked in such states including mystic wonder for example which gives a vibrant and resolute 'air'for example.

I suppose this is probably why the Jung attempted to study dreams in his research into what he called
the unconscious, but the problem was always going to be the perceived permanent 'subject' that is anylising the unconscious 'object' were one and the same dichotomy.

In terms of this hooded ghoul, what can this mean, maybe it is a projection of that unconscious collective shadow manifest, the very 'subject' viewing it's 'object'? It's just a theory.

All I know is that beyond consciousness in terms of the usual subject-object dichotomy there is a mysterious and magical reality that lies behind the the centripetal dictates of the ego which continuously throws us off balance while claiming to be the only master of the room, yet, it holds the key and the lock simultaniously!

Hey Ben. I also thin this is strongly related to the UFO/Alien phenomena. I believe that time-space does not obtain in the conventional sense, but instead, what we see within the dictates of perception is infact inter-dimensional - that is to say - fabrics of consciousness, perception.

When for example this fabric is torn in the use of drugs various 'realities' flood into the viewpoint. In my experiance of Chinese Ch'an & Tao Meditation one traces back perception and get's to the root of consciousness in order to remove the false fabric so that in perfect tranquillity the 'form' of this creative emptiness is reflected, throwing brightness on the usually obscured sense realm.

I recently watched a program where new scientists are totally writing off the creation big bang theory replacing it with a world that has no beginning or end, theories that are inter-dimensional rather than within the theory of time-space.

There are certainly similarities when it comes to alien contact and experiences like Ayahuasca trips, see Supernatural by Graham Hancock. The night visitations of sleep paralysis are very distinctive and different though, as David Hodrien has discovered. His brother is studying sleep paralysis for a psychology PhD. See:

Thanks for the information, Jewels. yes that's very interesting. It's good to know that the hooded ghoul is a friendly fellow. If I see him again I won't be so scared. Like you, I think there is an objective reality behind these visions.

I agree Ben that the sleep Paralysis phenomena are different to Alien contact. The think that links them all though is the Mind that perceives them. It is interesting that Don Philips is making contact with beings such as the Litedons which seem to operate on the same frequency as Ghosts, allbeit in a certain format of EVP. tHANKS bEN

Fascinated by the horrors of Sleep Paralysis? Based on true events, @lsydneyabel takes you into the world of the The Sleeping. You know when they’re here... you can feel them. Remember; stay awake, because when they come for you and take you, there is no going back. If you give up fighting, then you might as well give up living... . Don't miss this!
12:07 The Sleeping http://www.amazon.co.uk/dp/B0117KWI9M?tag=authl.it-21

I enjoyed reading this article. PLease continue publishing helpful topics like this. Regards, from Bedding stock