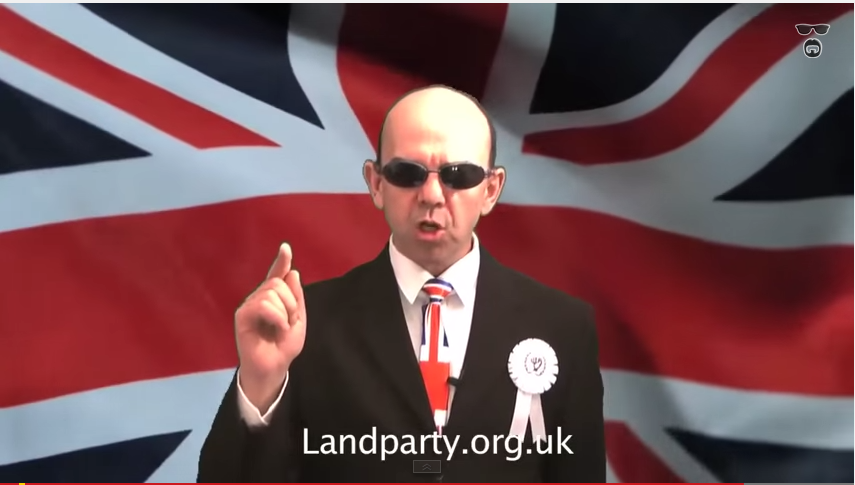 Deek Jackson is a comedian who has also been a YouTube sensation for many years with his channel FKN Newz, see: https://www.youtube.com/user/fknnewz/. His jokes are maturely satirical and often caustic in nature; he speaks out against war, social injustice, corporate greed and financial infamy. His performance often includes music, special effects and costumes, and I've seen him perform live at the Alternative View conferences. However he has also been on stage there as a speaker and he talked about the political party he has founded, the Land Party, formerly the Landless Peasants Party, see background link and: http://landparty.org.uk/. Like many comedians, the line between when he's being funny and when he's being serious is a fuzzy one, and he has injected a lot of humour into his political work... Politics could well do with that to be honest. A lot of Deek's manifesto sounds very progressive, especially his economic policy, see: http://landparty.org.uk/?page_id=91. The basis of a just society, in Deek's view, is land ownership. At the moment institutions like the church and state own most of the land in and the Queen is the world's biggest landowner, see: http://hpanwo-voice.blogspot.co.uk/2012/06/diamond-jubilee.html. A Land Party government would redistribute that land so that everybody would be given a fair share. In this sense Deek is very similar to the Levellers and Diggers of the 17th century who tried to break the power monopoly of the ruling class by reorganizing land ownership. Here is Deek's party political broadcast: https://www.youtube.com/watch?v=JQMwWn755Y4.

Once you get used to his comedy style, you'll see that there are significant differences of opinion between Deek and myself. Deek believes in man-made climate change and takes a dim view of most conspiracy theories. He doesn't appear to accept the existence of UFO's, Reptilians and the paranormal. It looks to me as if his one bond to the world of conspiracy theory is his understanding of false flag terrorism. However, despite our differences, I respect what he does and I think his heart is in the right place. I notice he's been working closely with Charlie Veitch who has, conversely, departed the conspiratorial community because of his rejection of false flag terrorism, see: https://www.youtube.com/watch?v=gZeSqKHkxfc. So complete agreement is not essential for a political collaboration. Nor is it for support; I think I would vote for Deek if I were eligible to in the constituency in which he's standing. Of course I know voting can never be the practical solution to anything because of the fraud of democracy; of course there is no chance Deek could ever form a government. Even if he won the election, he would never be permitted to by the "men in grey suits", see: http://hpanwo-voice.blogspot.co.uk/2014/07/house-of-cards.html. However the modern electoral system can be useful when it comes to generating publicity; that's about its only use. This is why I changed my mind about when David Icke stood in the and Howden by-election in 2008, see: http://en.wikipedia.org/wiki/Haltemprice_and_Howden_by-election,_2008. To begin with I declared that he was making a mistake, but later I supported his stance as a candidate. Deek is standing for election in the constituency of Witney; today this covers exactly the district of West Oxfordshire, although its boundaries have shifted over the years. His main rival in the election will be the incumbent Conservative, the Rt. Hon. David Cameron MP. Yes, Deek Jackson will be standing for election to Parliament against our Fearless Leader. This is not the first time Deek has stood in a general election against a Prime Minister; in 2010 he was up against Gordon Brown in at his Kirkcaldy and Cowdenbeath constituency and won fifty-seven votes. Witney is a safe Tory seat, yet there was some possibility that Brown might be knocked out by an opposition surge; therefore the government acted in response to this groundswell of public dissent by gerrymandering the constituency boundaries to include a few extra strong Labour-voting wards. This will not be necessary for Cameron, but if he had to, he would do the same. I wish Deek luck and if you are a Witney constituent, vote Land Party! I don't object to voting at all so long as it's done to make a statement of principle. The error comes when people think it will do any good by voting as a serious tactic.
See here for background: http://hpanwo.blogspot.co.uk/2010/04/alternative-view-4-part-4.html.
Posted by Ben Emlyn-Jones at 18:49

They say patriotism is the last refuge of a scoundrel :)