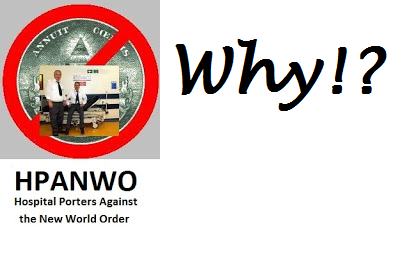 I’ve had an interesting letter from a regular HPANWO-reader whom I also know from talking to him on an internet forum. He appreciates my contribution very much and reassured me that he was not being derogatory, but he asks something that many other people have over the past few years: “Why have you set up a group called ‘Hospital Porters Against the New World Order’?” People make the point that it’s not really a group at all, it’s just a name for what I do on the internet. That’s true and I’ve never pretended otherwise. My correspondent, I’ll call him “Jerry”, has been discussing this with a friend of his and they had found themselves unable to grasp why I had chosen the acronym HPANWO, partly because it’s misleading; it suggests there are a large number of hospital porters involved. In fact there’s just me, however a few of my Brother and Sister Porters at the John Radcliffe are open-minded to the subjects I discuss and I’ve been contacted by porters in other hospitals who are on my wavelength. Another problem Jerry’s friend had was that I’m “doing myself an injustice”. He put himself in the position of somebody new to the Truth movement and thought they might see the HPANWO brand as a fantasy dreamed up by somebody with “delusions of grandeur”. He fears this could be used to discredit my work, after all the media has trained the general public to react to anything to put on the laughter cue card. I replied thus (notes in parentheses are not in my letter):

Hi Jerry.
Thanks for writing; it's good to put a real name to a username.
Several people have made this comment to me, in fact Tony Topping does in my recent HPANWO Radio interview, see: http://hpanwo-radio.blogspot.co.uk/2015/03/programme-130-podcast-tony-topping.html. The origins of the name Hospital Porters Against the New World Order were inspired by a man in America called Jack McLamb who set up a group called "Police and Military Against the New World Order" (McLamb was instrumental in resolving the Ruby Ridge incident; without his negotiating skills the whole Weaver family might have been slaughtered). I thought, if the police and military can have an organization against the NWO, why can’t hospital porters? I was very proud to be a hospital porter and considered myself an essential member of a life-saving team doing one of the most important jobs in the world. There were many who resented my feelings, in the hospital and outside it (I sometimes think we’re not meant to enjoy our jobs or be proud of them. I know people who feel guilty because they like their jobs and those who feel envious of others who do. It’s as if a job, by definition, has to be something you hate doing, a punishment for some kind of inherent crime of being. See here for more details on the hospital portering situation: http://hpanwo.blogspot.co.uk/2007/12/dont-tell-em-were-porters.html). Of course my feelings were based on something that was factually correct; it is conformism alone that says hospital porters are not allowed to be proud. It's strange and disappointing that this conformism extends into the Truth movement as well. After all Gary Heseltine has an organization called PRUFOS- Police Reporting UFO Sightings, and I don't recall anybody having trouble grasping that. Nobody has ever suggested Gary is doing himself an injustice or having delusions of grandeur. For that matter, nobody ever criticized Jack McLamb for the name of his group either.
I think being in the Truth movement means standing up to all kinds of pathological authoritarianism, including psychological and cultural conformism, (I’m very much inspired by Robert Anton Wilson here, and his philosophy of discordianism) and that is one of the reasons I call HPANWO what it is; and I don't wish to change it. No matter what we do, the elite will find something to put on the laughter cue card; we saw this with the recent Channel 4 UFO programme I wrote about on the forum... a programme which I refused to have anything to do with (See here for more details: http://hpanwo-voice.blogspot.co.uk/2015/03/letters-of-complaint.html. Plum Pictures have returned The Great UFO Conspiracy to 4OD and my face is obliterated on the updated cut).
I'm glad you appreciate my contribution, Jerry, and I hope I've explained myself to your satisfaction. Please pass on my comments to your mate and I hope he will understand too.
Kind regards
Ben
Posted by Ben Emlyn-Jones at 13:39

Although you yet again have to make a case and defend your HPANWO name and give others the benifit of the doubt, I get a bit fed up with this line of questioning to be honest, I never see any fundamental difference between your premise and that of any other organisations premise. Your use of Porters as an organisation is used so because you are rightly proud of your career and you were probably a f**cking cracking porter. The fact you lost your job or no longer do it has nothing to do with anything.

I have never seen the problem in the title HPANWO and it's reasoning. Perhaps - if one does not understand it's root history then that can be forgiven but those who then fail to grasp it's use after that are being disingenuous either knowingly or inadvertantly. I think what people are failing to grasp is that all bodies have a 'root'premise and even if the casual relationship to this premise changes (in a merely symptomatic way) the premise itself does not change as a term of enderement. Indeed, retired policemen for example are still represented by the police unions and groups and still consider themselves part of that family of the police federation, so what's the difference to porters, ex-street cleaners or whatever?, they all provide a social service and an honest one at that.

The reason people have a problem with it is because subconsciously they think lesser of individuals such as porters under the collective shadow of social conformism (as you state) which elevates certain groups above others such as police, soldiers etc, etc, even though all may and should carry out important jobs or jobs that other people will not do. The difference is conditioned subjectiveness not ontological reasoning and in the so called free-thinking arena it is dissapointing to see individuals constantly fail to understand this. The same sh*t exists to this day with Gender, Color, the are your from it's bollocks to be quite honest, there is no constant or definitives and any that are are perpetuated and strengthened due to ignorance and fear.

Of coarse people may ridicule the HPANWO/Porter premise but have they ever worked in the NHS doing this job? As you know I have and it's bloody hard work for little pay and as important as any other official position that involves peoples lives and their safety.

You mentioned Gary Hesseltine and this states this fact all the more clearly, as a retired policeman he can still use his career as an exceptable premise yet a porter cannot, why? Those individuals need to ask themselves Ben.

Hi X. Thanks, Mate :-) I know you're one of the guys who has always been on my wavelength over this. Not everybody is, but it's good that I've had another opportunity to try and explain to them. you know Slaxxxer on YouTube, who fell out with me? He's become obsessed with this issue and refers to it all the time!

I'll be honest here , I watch all the videos and every time I hear you say “Pride and Dignity , Stop the New World Order!” I can't help but bloody well punch the air!

I'm not a porter , I have however met lot of porters as i've spent a great deal of time in and around hospitals , most of the folks i've met have good old fashioned down to earth people ...good people doing good work and I can see and fully understand having pride in that work , they should be proud because they do indeed matter.

I once spent a full six weeks in hospital , I honestly preferred my time with the porters than I did with the doctors or nurses , it was nice to be around someone who wasn't going to poke and prod and judge you ...someone who would treat you like a human being rather than a walking specimen jar or a lump of meat , its honestly reassuring when you meet someone like that having spent the entire day being “Supervised”.

Ben you've created something important here , I say this because its important to me and I know I'm not the only one who feels this way , within the brand of HPANWO you bring up issues that aren't “Mainstream” but all the same “Are Important” we're all just ordinary people , but we're awake enough the see the constant stream of lies that's being fed to us on a daily basis.

I frankly don't care what the XXX'ers of the world say , how they feel or what they think...

“ I will NOT comply , obey , be a good little drone and go back to my pepsi cola , cornflakes and watch the friggin X-Factor and EastEnders till my brain is dribbling out of my ears !”

“ I will NOT conform to the stereotypes that a corrupted system inflicts upon us!”

“ I will NOT stop asking the important questions!”

“ And I WILL Resist in any way , shape or form I possibly can till my last breath!”