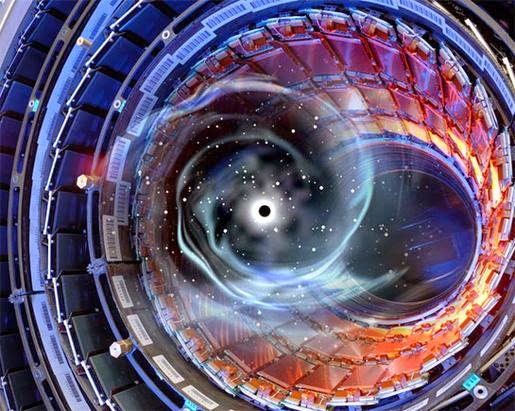 As I reported a few weeks ago, the Large Hadron Collider is to be restarted after a three-year refit. Later in the week, proton beams will begin circulating and in a couple of months they'll be at full speed and collision experiments will begin again, see the background link below for essential background. Scientists have long theorized the existence of parallel universes, dating back to physicist Hugh Everett, and in this new LHC experiment they hope to find evidence of them. There are anomalies in our own physical universe, such as dark energy and strange gravitational effects, that could be caused by interference from parallel universes. We will hopefully find the answer to these mysteries with the LHC, although in some months or a year or two's time, not "DAYS!" as this article claims: http://www.express.co.uk/news/world/565315/Scientists-at-Large-Hadron-Collider-hope-to-make-contact-with-PARALLEL-UNIVERSE-in-days. ...Or is something else going on? As I say in the background article, I'm concerned about the dangers associated with operating the LHC and there's reason to think that these dangers are not side-effects, but the actual objectives. The powers-that-be always drop hints about what they're doing, hence the statue and 666 symbol, see background link. Why? It might be for occult reasons related to karma. By telling us what they're doing they are given a tacit mandate by us which relieves them of accountability, in their belief system. It could also be simple vainglory; the Illuminati feel enormous contempt for ordinary people, they call us goyim- "cattle"; and they get pleasure out of toying with us. This subconscious sense of catastrophe has manifested in other ways. Ahead of this week's start up for "Run Two" the experimental dance troupe Symmetry did a show at CERN and a part of their routine was performed in the LHC. Believe it or not the dance is called Shiva! It couldn't be more blatant, see: http://yournewswire.com/bizarre-dance-of-destruction-performed-at-cern-ahead-of-launch/. A feature film has also been made at CERN. Decay is a zombie movie produced by the scientists there, see: https://www.youtube.com/watch?v=n-NwLUPZWZc. It's a low-budget spoof and quite funny, but this is an odd and disquieting connection with what I've noticed going on in the world, and it reminds me of what I talk about here how zombies are being portrayed as real or semi-real, see: http://hpanwo-tv.blogspot.co.uk/2015/01/real-zombies-2015.html.

What will happen when the Large Hadron Collider is powered up to full throttle and it begins collisions at however many giga or tera electron volts the it can do flat out? As I said in the background article, fiddling with the fundamental structure of the universe could have unpredictable and hazardous effects. It's like undermining the foundation of a house. The mini-black hole and strangelet risks are still a worry for me. Even the BBC has had to say something, see here (from the start to about 5 mins and from 49.11 to the end): https://www.youtube.com/watch?v=FQQCxQuxSjQ. However the menace posed by "Run Two" sees that and raises it. "Making contact" with a parallel universe could mean all kinds of things. What effect would it have on our own universe? Would it cause some kind of universal quantum wave collapse if alternative universes became physically connected to our own? Could something from "out there" get into "here" with cataclysmic consequences, as in the film The Mist, see: http://hpanwo.blogspot.co.uk/2008/11/mist.html. It could also effect the fabric of reality as we know it. Mophie, the American electronics firm have produced a very disturbing TV advert that premiered a few weeks ago during the Superbowl XLIX, a slot that guarantees massive viewing figures. The one-minute commercial shows a world in which all the normal laws of causality and physical consistency break down leading to a surreal apocalypse. At the end of the advert it is revealed that this happened because God did not use a Mophie battery so the inferior normal battery on his mobile phone ran down too quickly, see: https://www.youtube.com/watch?v=r6kp618DkSs. Could this chilling vision have some basis in truth? I'm not sure, but I don't want to give you nightmares, dear HPANWO-reader. Like Gandalf from Lord of the Rings, I believe there are forces for good as well as evil at work in this world. I know there's no such thing as a messiah to sit around waiting for and that we humans are masters of our own destiny; it is up to we, ourselves to create a better world. Nevertheless, if there is some horrible atrocity awaiting us that is beyond our capability to prevent, and if somebody wants to step in and lend a hand, I will happily swallow my pride and accept. Indeed, could this by why the LHC suffered from mysterious technical problems a few years ago? Maybe it will again this time and we are never going to have to face the perils of dimensional haemorrhage. Then the Loomies will never have their Götterdammerung; and they will have to face total defeat.
See here for essential background: http://hpanwo-voice.blogspot.co.uk/2015/03/lhc-restart.html.
Posted by Ben Emlyn-Jones at 18:47

We are living within what I believe is the infinite potentials of Mind, Consciousness is the limitations of our centrifugal awareness that we apprehend as 'Mind' as the 'I' we believe is constant and stherefore subject to perceived birth and death but this is a sectional and limited awareness that has the potential to:

A) either liberate us from that limited awareness via 'relfective awareness' allowing us to be - as you state - 'masters' of our perception or:

B) lead us into greater obscuration as 'masters' of that confusion.

The question seems to be that any amount of realities can be conjured and stirred by the Subjective mind that will translate an objective 'reality', a reality that shifts over time, indeed, the 'reality' of 1066 to 2015 is different as we see many possibilities that were not apparent then. This means that the reality we hold constant cannot possibly be reality but an apprehension of it only.

Science (which is objective man and his objective tools) in trying to push forward further 'effects' by assuming certain 'constants' as 'causes' without understanding and embodying what underlies this dichotomy we must ask ourselves are we prepared, wise and enlightened enough to be able to reflect this reality without becoming overwhelmed or damaged by it?.

The more human being feels themselves to be a self as understood in conventional self-serving terms, attempts to intensify this self and reach ever unattainable realities, the more drastically it seems we step out of the centre of being, which is no longer our own centre, and the
further we remove ourselves from it.

Wether it be a weapon that destroys humanity to a drug that throws us so far out that we become 'insane' basically means that we have forfeited mastery over reality. I think that the concept of 'Karma' or 'Transmigration' is the constant echoing of this cyclical blind wish fulfillment that is - in effect - forfeiting our innate potential, I feel this is what has left us exposed to 'outside' forces.

Ironically it may well be the case that to 'edit' a better version of ourselves (as if we could stand behind ourselves and push) may be doomed to failure. Perhaps - it is a question of allowing ourselves to be 'worked upon' - attuning ourselves to
a new centre, or better put - according with the one true centre
which is forever there, viz-a-viz REALITY and is beyond the centripetal dictatorship of the ego
which forever throw us off balance seeking realities and dimensions that are uncontrollable rather than the mystery which can be unlocked from within leaving limitless but controllable REALITY as opposed to multifarious but limited uncontrollable realit-ies.

The old story of the 'Snake' that is actually a peice of rope springs to mind, In order to clearly see what the Snake truly is we must get close to it, the same I believe is true with ourselves.

Having strayed from this centre perhaps Ben there will be no alternative for us but a radical reversal to go back along the way of a thousand lives, fears and trials have shown it to be the way of the merry go round, a life lived on our own limited resources and the worlds limited resourse and return home to the 'house of reality' that we continue to leave and return to with all our baggage in the transmigratitive process.

Are we chasing phantoms? are we jumping out of the nest before we are fully fledged?, that will ultimately be revealed, whatever the case there are other contingent beings visiting us through many doors of these realities - perhaps - with the same good and bad intentions as us, realities which we may enter into once we have exhausted this one.

I truly believe we can be the masters (in a non self serving meaning of master) of an undefinable reality that is so because we do not try to break into it but break out of a limited one first. FROM A STRANDED INTERSTELLAR FUGITIVE :). CHEERS BEN