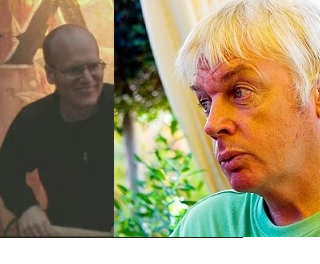 David Icke has had to pay £117,000 in damages to the lawyer and political activist Richard Warman in an out of court settlement. Warman launched a lawsuit against David over supposedly libellous statements made in David's book Children of the Matrix (Bridge of Love Books 2001). The report says: "Icke included false allegations... that Warman was seeking to suppress Icke’s purported exposure of Satanic child abuse and murder.", see: http://yournewswire.com/david-icke-defeat-conspiracy-author-made-to-pay-117000-for-lies/. (This article was written by Sean Adl-Tabatabai, a former friend of David's who used to help run his business. But by the tone of it, you can clearly see that Sean has turned vehemently against David and now deeply dislikes him.) Obviously I don't know all the details of the case, but I do know a few things not mentioned in Sean's report. Richard Warman has been fighting David Icke for almost twenty years; he's been attempting to have David banned from and having his books burned under Canadian "hate crime" laws. He's also been contacting all the venues where David does live shows or media spots and trying to persuade them to cancel the events. In 2000 he organized a gang to commit a violent assault on David. Sure, the weapons they used were just lemon meringue pies, but the intention was definitely to humiliate him. They also did damage to a bookshop's stock, see here from 39.00: https://www.youtube.com/watch?v=P2ypYcZ7qfw. The question I'd like to ask the court is that if this doesn't constitute a suppression of David's exposure of Satanic child abuse, then what would?

Why is this happening? What has David ever done to deserve this? According to Richard Warman David is "anti-Semitic" he's against Jews, that when David talks about the New World Order he believes Jews are behind it. This makes him the equivalent of Adolf Hitler. This is despite the fact that David specifically states that Jews are not behind the New World Order, the Illuminati are. The obsessive and fallacious accusation of anti-Semitism is a trick commonly used by pro-Israel groups, like the Anti-Defamation League, and Warman often campaigns with them. Richard Warman describes himself as a "human rights" lawyer, which is ironic because most of his work consists of trying to remove rights from a number of humans; the right to free speech, the right to publish literature, the right to assembly, the right to a public platform, the right to free access of the internet. He claims to be motivated by a desire to prevent the spread of "hate propaganda"; he goes on to say: "This work has predominantly focused on the white supremacist and neo-Nazi movements..." and this apparently includes David Icke's material. Anybody who takes the tiniest glance at David will immediately realize what an absurd proposition that is. Warman is a part of "antifa", the generic anti-fascist tendency. This is a subject I've written about before because I myself was falsely labelled a "fascist" in the same way David was, see: http://hpanwo-voice.blogspot.co.uk/2015/02/marine-le-pen-at-oxford-union.html. Some of the other people Warman targets are also innocent in my view. A lot of them do not "hate!" anybody; they are simply concerned about the mistreatment of white, straight males in society, and they oppose cultural Marxism. I agree with them, see: http://hpanwo-voice.blogspot.co.uk/2013/01/discrimination-against-christians-2.html. Actually even if they are "haters!" then the way to handle them is to discuss and debate with them, not try to censor their words. One thing for sure is that this situation is not what Sean says it is, a "defeat" for David Icke. It's a setback, that's all. David will not be stopped by this injustice; in fact he will not be stopped by anything!
See here for background: http://hpanwo-voice.blogspot.co.uk/2014/12/david-icke-is-human.html.
And: http://hpanwo-tv.blogspot.co.uk/2014/11/david-icke-live-2014.html.
Posted by Ben Emlyn-Jones at 19:11

Hello Ben. The likes of Warman are the barnacles who attach themselves to the changing tide level, viz. personal issues and then conflate them and assimilate them into this caustic 'positivism' which as you know is a sham, indeed, no different from 'Negativism' it's 'natural' opposite and it's harbinger.

This is the Orwellian rubric. Positive discrimination is a modern concept, a natural dialectical response to clear and blatant secular violence and prejudice. People forget we are now living in the post-modern world (if we shall be inclined to label it as such) and a world where extremes have been assessed which includes both far right and far left destruction which are both now just tools used by agenda's be they personal and THE Agenda of this world order.

Where is the line in the sand drawn? Who draws it? and also Where did it start? - The answer is not so simple as you will know Ben and the collective shadow that was both a force in Nazi Germany and is the same with the 'positive vibrations' - 'cultural Marxism' which is no different, it is the same shadow, it obscures.

Ironically after the so called 'End Of The Civil Rights Movement' where Black-Brown Americans were supposedly free it was a myth, instead we have the beginnings of the Blue Print of the new world order - that is to say - That what actually happened is that Successful 'Black Buisnesses' collapsed because at the time they were not permitted to go into white businesses so they had to shop at their own, not by choice, but this forced state of affairs saw the establishment of highly successful black businesses and holiday resorts like Idlewild etc for the wealthy black middles classes.

This is exactly whats happened now and in the case of David Icke we are forced from forced but dignified independance into forced freedom which looks like a 'favour' has been granted but actually implies that prejudice is just more subtle and is conducted through commerce, lawsuits, undercutting and cultural-marxism, viz. domestic dominance.

David unfortunately is likewise seeing the recessing back of the waters, he has lost some followers, friends, family and the barnacles are exposed Ben, one can only scrape them off althogh some cling for longer than others. Order is now used to suppress and destroy people and in this understanding we learn that terms such as 'positive' are just relative terms, we need to be asking what does this imply in reality. As you said I don't think David will be stopped and for all his flaws at least they are not 'orderly' and 'positive' flaws!. Thanks for posting Ben

Hi X. Thanks for the detailed comment. The origins of so much that the modern world goes through can be traced back to cultural Marxist think tanks on the late 19th and early 20th century. These mind control attacks are dressed up as something noble; after all is there anybody who is honestly AGAINST women's rights? AGAINST the abolition of black slavery? This is why it is so difficult to speak out on this issue.

I've been fair to David I think. In this polarized world it's rare I'll be listened to because you are EITHER an enemy of David Icke who thinks he's the Antichrist Chicken-Fucker from Hell... OR he's a "messiah" to whom I'm a "disciple!" You can't win!

Hi Ben. Yes the cultural Marxist think tanks of the late 19th and early 20th century and which take the guise of such institutions as 'social cohesian' institutes are a source of such thinking. In answer to your question "is there honestly anybody who is really AGAINST women's rights? AGAINST the abolition of black slavery" I would have to answer Yes but of coarse I understand your meaning.

This is why I mentioned the collective shadow because it can take two forms, viz. collective conscious 'aspiration' and collective unconsciousness. It's sad to see these things transpire within the so called 'truth' movement (as this means different things to diff people) which I think comes from a lack of reflective awareness Ben. With this in mind when it comes to money, prestige, emotions and power the game always changes and obscures the original intention. If we are in touch with the 'devil' within, we are ultimately less likely to locate it elsewhere, or in as with Warman's case someone else which seems to be happening regular. If we could consider this more I think we could tackle the real problems with more clarity and solidarity. Cheers Ben