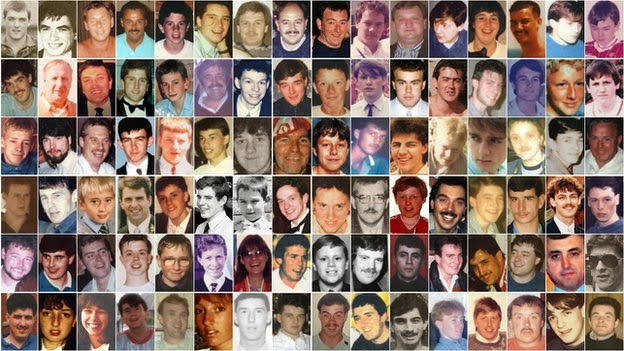 A common refrain I hear in reply to anything I talk about is: "conspiracy theories are never proven true!" Indeed in his book Voodoo Histories David Aaronovitch defines a conspiracy theory as "an explanation posed in place of another more logical and likely one.", see: http://www.littleatoms.com/podcast/david-aaronovitch. However despite this, conspiracy theories are being proved to be true every day. In the last few years such revelations are happening more and more often; and one of the most significant of these is connected to the Hillsborough Disaster. On during an FA Cup tie between the and football teams at the Hillsborough Stadium in , a large number of people from the contingent entered one of the terraces unexpectedly. The enclosed terrace became so overcrowded that the people inside were crushed under their own collective weight. Almost a hundred people were killed and more than a thousand injured; it was the biggest single loss of life on British soil since the Blitz, and it was all played out on live TV. The original coroner's inquest declared a verdict of accidental death, that the fans themselves had broken into the stadium by forcing a locked gate. The only real action taken were changes to the architecture of football grounds. However this outcome was seriously questioned by survivors and relatives of those who died. They claimed that the police had opened the gate to let the people in, see background links below. The man in command of the police operation at the match that day, David Duckenfield, used to stringently deny this, yet at the current court hearing about the tragedy he finally after twenty-six years admitted, openly and without ambiguity, that he had lied. He went on to admit that this action was the direct cause of all the death and injury that day, see: http://www.bbc.co.uk/news/uk-31928476. Will he face further charges and investigations?... I'd like to say certainly, but in this world I'll have to make do with hopefully. Maybe we'll one day get to the bottom of why Duckenfield and the other police officers acted as they did that day. What were their motives and intentions? Was it stupidity and negligence? Or was it mass murder, as Tony Farrell asserts, see: https://www.youtube.com/watch?v=JQIxJFPPP1w? I don't think this story is over yet. Either way this should still, hopefully, be a lesson to conspiracy Skeptics; a large amount of history is simply conspiracy theory looked at with the benefit of hindsight. It has taken twenty-six years for the Hillsborough justice campaigners to squeeze that confession out of Duckenfield; until a few years ago the very suggestion that the disaster was anything other than an unavoidable accident could court accusations of being a "conspiracy theorist!" Right now we're going through the same process when it comes to child abuse in government and the BBC, see: http://hpanwo-voice.blogspot.co.uk/2015/03/cyril-smith-was-set-free.html and: http://hpanwo-hpwa.blogspot.co.uk/2015/02/jimmy-savile-nhs-knew.html. How many more ideas that are currently out there which are generally regarded as "conspiracy theories!" are waiting to be proved true?
See here for background: http://hpanwo-voice.blogspot.co.uk/2015/02/hillsborough-update-2015.html.
And: http://hpanwo-voice.blogspot.co.uk/2014/09/hillsborough-cover-up-continues.html.
And: http://hpanwo-voice.blogspot.co.uk/2012/10/hillsborough-cover-up.html.
And: http://hpanwo-voice.blogspot.co.uk/2014/02/rob-brotherton-and-psychology-of.html.
Posted by Ben Emlyn-Jones at 18:20

Tragic event that saw Liverpudlians branded as criminals and scum. Their behavior on the day was impeccable with people helping eachother the best they could whilst the establishment branded them otherwise (including the very papers that have now printed 'commerative' stories full of rose tinted admiration that was not there in the first place).

The sad thing is Ben on the whole people are fickle and even when a 'conspiracy' is proved true they move onto the next bone of contention. I've always said, if for example rascists had no 'other color' to hate they would hate people from another country the same color, if they did not have this they would hate the next town, etc etc. The same pattern for retiring skeptics, it is a rubric, a method, a device and a way of life. Ultimately it is a Heraclitean-flux philosophy Ben & faulty analyse for it is always tainted by this rubric.

There is always room for doubt and questioning, it is something that both 'sides' are dependent upon but as I've said before there is a conflation of the word 'doubt' one is retiring and skeptical and one is acute and sharpens consciousness, the latter can be applied to any side of the fence whilst the former is always one-sided.

Will the Hillsborough families ever get more than a printed apology or rose-tinted eulogy? I doubt it. As we know those in power can abuse children and then implement a social care system that also abuses them.

The biggest problem is we are ill aware and thoroughly divided psychologically and it suffices to leave it at that in terms of the agenda's of the men in the castle.

I had a discussion with an individual regarding Hillsborough disaster and he was angry about how the cover up transpired but then a short while later talked about Liverpudlians in a derogatory way, the usual sterotypes This is the problem, hypocrites Ben.

For somebody who has lived in Liverpool, for all the poverty that has come about since the crash of Liverpools industry I found the people salt of the earth, how many people in the establishment that have perpetrated this cover up can we say that about?. Thanks for the post Ben . . . .

It was sickening to read the smears in The Sun. Probably even then Murdoch's friends in high places knew trouble was coming. The Sun is still a very poor seller in Liverpool to this day. And it's true that people seem to look for ways to turn on each other. In Northern Ireland everybody was white and spoke the same language, but they came up with another division. I'm sorry you had that negative experience with the person who was prejudiced against Liverpudlians. It's a cognitive dissonance that resembles my paradoxical UKIP supporting David Icke-reading friends.