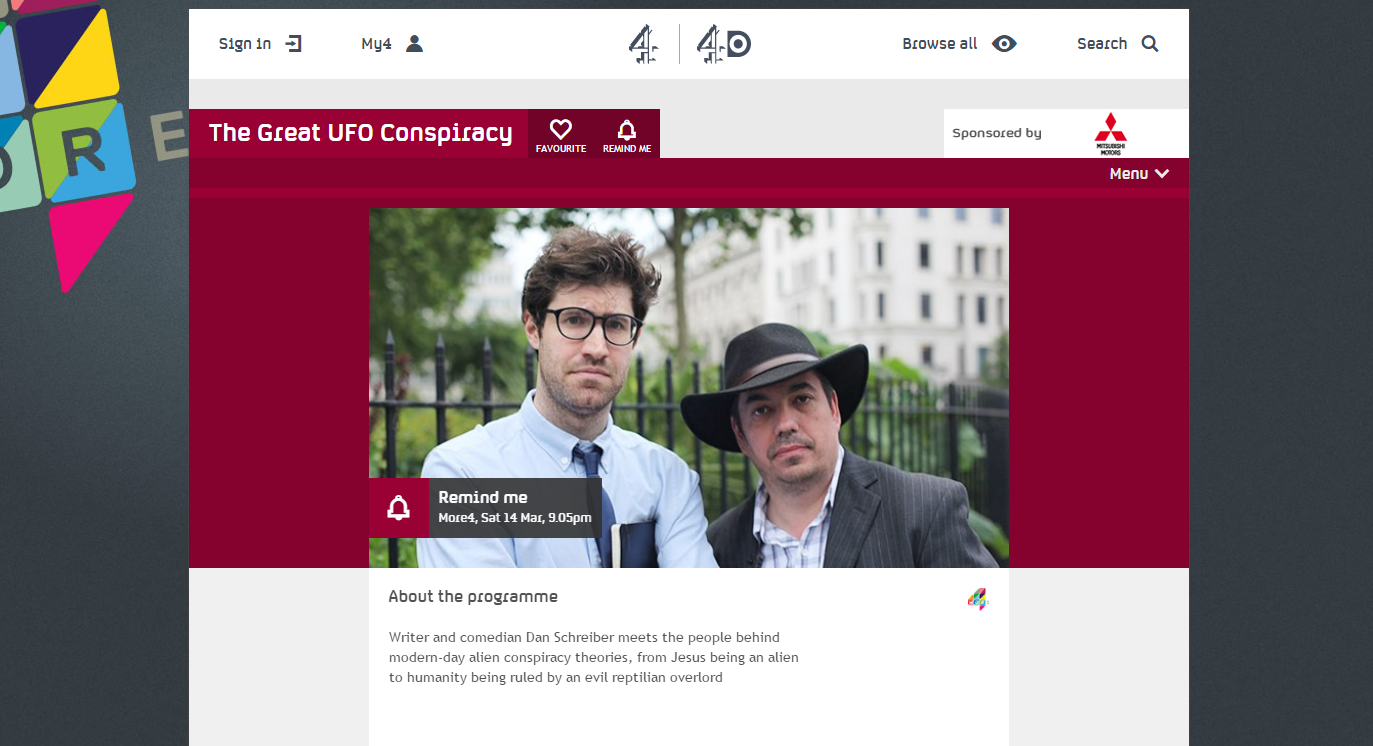 The Great UFO Conspiracy will be broadcast on Saturday the 14th of March at on More 4, see: http://www.channel4.com/programmes/the-great-ufo-conspiracy.
I expected it to have a silly title like that; actually my money was on The Wacky World of Flying Saucers or something equally contemptible. This upcoming documentary is made by Plum Pictures, a company which describes itself as a producer of "award-winning" television, see: http://www.plumpictures.co.uk/#!/home. Of course I haven't seen the programme yet, nobody has, so you might wonder why I'm being so cynical and pessimistic about it. There are a number of clues, firstly the aforementioned title. The presenter and/or narrator of the show is the comedian Dan Schreiber who is best known for co-hosting the Skeptic-themed comedy TV quiz programme QI; his Twitter banner is a still from the Santilli Film, see: https://twitter.com/Schreiberland. Not a good start.

A unit from Plum Pictures attended the Bases at the Barge event last year to shoot some footage for the programme. There were five or six of them, all polite and well-spoken. The director was a young Canadian man and we had a pleasant conversation. I explained that we were all very wary because of our previous experience with Off the Fence Productions and their atrocious Confessions of an Alien Abductee, (see background links at the bottom) and he said: "I understand. I really do. Iwant to make an informative and balanced documentary about the people involved with UFO's." I didn't say any more, but I remembered the Off the Fence director I met at the AMMACH conference who said something equally encouraging, see: http://hpanwo.blogspot.co.uk/2013/04/ammach-conference-2013.html. I had felt very hopeful about their programme... until I saw it. The conference began and the film crew circulated unobtrusively, filming inside and outside The Barge pub, sometimes popping into the function room, at other times panning around the beer garden. Then the experiencer and targeted individual Jeff Scott came on stage and during his talk he displayed the slide he'd used at AMMACH which showed a cutaway diagram of the human abdomen. He pointed and said: "Here is the rectum and this is where the aliens insert the implants..." It was as if an alarm bell went off; the Plum Pictures team leapt into action. Into the auditorium went the girl with the big camera, in went the bloke with the sound boom, in went the director. They almost fell over themselves in their urgency to capture a shot of poor Jeff standing on stage with that slide on the screen. I then knew then exactly what kind of TV programme this was going to be. Afterwards I approached the director and informed him that I was refusing permission for Plum Pictures to use my image anywhere on their production; not even a wide angle cameo of the back of my head, not even my voice on the soundtrack. See here from where I caught them red-handed: https://www.youtube.com/watch?v=mMdyMb8ndPk. Several of my friends did agree to be involved with Plum Pictures and Miles Johnston invited them to feature the Bases Project in their TV show. Tony Topping has also taken part and you can see him standing next to Dan Schreiber in the programme poster. I think both of them are making a big mistake and I've told them so. I talked to Miles about this in my recent HPANWO Radio interview with him, see: http://hpanwo-radio.blogspot.co.uk/2014/06/programme-92-podcast-miles-johnston.html. I'm surprised because both of them have already had bad previous experiences of being crucified on the TV pillory; see background links at the bottom.

Tony and Miles really seem to believe that they can somehow make progress by allowing themselves to be used for these public disinformation hatchet jobs. I totally disagree. My advice to anybody in the UFO/conspiratorial/paranormal community who is asked to take part in a mainstream TV programme is very simple: DON'T! Several times now I've been in that position myself and have been very relieved after making that decision, see: http://hpanwo-voice.blogspot.co.uk/2015/02/weighing-up-enemy-my-lucky-escape.html. I was hoping that The Great UFO Conspiracy had been cancelled; no such luck. However the good news is that I'm quite an expert at writing intelligently scathing reviews of lousy TV programmes and I've done so before several times, see background links. When I publish my reviews on HPANWO they often rise very high on the Google ratings, sometimes close to the top of the first page. This means that anybody who goes online to search for the programme will always come across my review of it. So on a positive note, I look forward very much to eviscerating The Great UFO Conspiracy and scattering its dismembered entrails all over the popular internet... On the other hand of course, I might be completely wrong. Maybe I've misjudged Plum Pictures. I could be surprised to find that they have made a decent programme about UFO's and alien contact, and it's not a hit piece after all... In which case I shall publicly eat my hat with garlic mayonnaise.
See here for background: http://hpanwo-tv.blogspot.co.uk/2013/06/confessions-of-alien-abductee-aftermath.html.
And: http://hpanwo-voice.blogspot.co.uk/2013/10/on-benefits-and-proud.html.
And: http://hpanwo-voice.blogspot.co.uk/2012/10/bbc-77-conspiracy-road-trip.html.
And: http://hpanwo-voice.blogspot.co.uk/2012/10/bbc-conspiracy-road-trip-ufos.html.
Posted by Ben Emlyn-Jones at 17:58

They asked me to do it Ben and I flatly refused because I researched the producer and director who have both done very dodgy 'fixed' documentary programs in the past. Tony only did it because he and Miles both got paid over £1000 for appearing. Just one thing to note, the producers used the Planet X Live contact list that Tony gave them without permission...
I saw this coming 2 years ago and alarm bells sounded then. Ok hands up the BBC3 show I did was not great but this one is a clanger just wait and see.

Yeah and you did the right thing to go behind the scenes out of sight. I hear your work continues and is good Darren ;-)

Well done for refusing, DP and thanks for the information. How did they get access to the Planet X contact list? I think Tony and Miles made a mistake, as I say, but the reason they did it was because they truly thought they could make a difference. I'm glad they were paid £1000, that's only fair when you consider they put in time for it and had to take time off work etc.

'Writer and comedian Dan Schreiber meets the people behind the most current alien conspiracy theories'.

I think the fact that they are employing a 'comedian/writer' and not a serious Writer/Public figure says a lot Ben. It's just sad to see people being belittled, people who have sacrificed a lot.