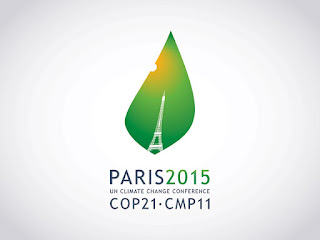 Tomorrow the 2015 United Nations Climate Change Conference gets underway in . Security is extra tight after the attacks a fortnight ago, see: http://hpanwo-tv.blogspot.co.uk/2015/11/paris-attacks-2-one-week-later.html. A number of protesters from the Climate Action Network and other pressure groups have been banned from the event or even refused entry to . The "emergency laws" I warned about in the link above have already been put into force in order to place some people under house arrest, see: http://www.theguardian.com/environment/2015/nov/27/paris-climate-activists-put-under-house-arrest-using-emergency-laws. A hundred and forty-seven world leaders are currently converging on , including US President Obama and President of China Xi Jinping. The long-haul flights needed to bring these powerbrokers to the table will no doubt raise their personal Carbon™ footprints to the size of a yeti's. The two-week conference will be hosted at a luxury purpose-built centre at Le Bourget in the northeast of . The Twenty-first conference of the parties- "COP 21" is one of the most highly charged political events of the decade, see: http://www.cop21.gouv.fr/en/. The main purpose of COP 21 will be to reach an agreement on the reduction of Carbon™ emissions. Nations will pledge an obligation to cut their emissions by a certain percentage by a certain deadline; for example, might say that it will cut its Carbon™ emissions by 20% by 2030 etc. During the last climate change conference at in 2009, the world's nations refused to agree to any such treaty and the process fell apart. This is a slow and abortive discussion that began at the "Earth Summit" in in 1992 and was boosted by the Kyoto Protocol in 1997. For some climate campaigners, this breakdown of negotiations has bred frustration and desperation; see background links below. This is the motivation of the protesters.

If a deal is reached it will no doubt be given a catchy media-friendly name like "the Paris Climate Accord", but its end result will probably be very different to the initial model. Putting the treaty into practice will be far more complicated than each country getting out a notepad and stopwatch. Some nations might choose to trade their reductions within the protocols by converting their units of emissions into "carbon credits" which take the form a bond that can be bartered, bought or sold; directly with client states or on the stock market. It's even been suggested that carbon credits could be the proposed global currency. As always with any public story on climate change, the interesting part is not what is being said, but what is not; the words between the lines. The background of extreme proposals that could be suggested in the event of another breakdown in negotiations. A global state of emergency to save the planet that would make President Hollande's anti-terrorist measures look like a playful wrist-slap. As Dr Mayer Hillman says in the first background link below: "The United Nations Personal Carbon Allowances must be implemented... or we're doomed!" Hillman advocates draconian global regulation of transport for holidays, business and trade. His ideas for the transformation of all sectors of the economy, geared towards organizing it in light of its use of fossil fuels and environmental impact resemble communism. He proposes food rationing on the model used during World War II and goes on to state: "the democratic process is not sacrosanct... The majority view in the developed world is that people are not prepared to make the lifestyle choices for the dramatic carbon reductions necessary and their democratic leaders do nothing except pander to their whims to get elected... Do we subscribe to the democratic approach to decision making which has so far failed? Or, in this instance, as I would argue, it has to be set aside. Whether the public like it or not, these changes have to be made!... If these changes are not made, we will assuredly hand over a dying planet to succeeding generations". The idea of geoengineering is now a serious possibility with the being one of the first academic institutions to run courses on the subject, see: http://hpanwo-voice.blogspot.co.uk/2015/03/oxford-martin-school-and-geoengineering.html. As New Scientist reports, the theory is about to be tested in the real world, see: https://www.newscientist.com/article/mg22429974.000-geoengineering-the-planet-first-experiments-take-shape/#.VKA4GsgU. However, there is no doubt that such projects have already been covertly implemented without anybody asking permission from the "decadent rabble", see: http://hpanwo-voice.blogspot.co.uk/2012/12/london-chemtrails-awareness-conference.html. Another silent yell is the mounting evidence that contradicts the official story on climate change. Not only has it been demonstrated that human industrial Carbon™ emissions have little or no effect on climate, but that the natural global warming of the last forty years has halted and might even be reversing, see: http://www.thenewamerican.com/tech/environment/item/19121-with-ice-growing-at-both-poles-global-warming-theories-implode# and: http://conspiracyanalyst.org/2015/11/04/nasa-study-showing-massive-ice-growth-debunks-un-claims/. However people have been prevented from integrating this information because of the dominance of the Carbonista regime. This regime uses convenient logical fallacies, either through deliberate lies, a la Climategate, or through subconscious tacit groupthink. For instance when a place experiences below average temperatures the cry will go out: "But this is just weather, not climate. Don't you know the difference? The general trend is still upwards, old boy; look at these figures from the IPCC!" However when we experience above average temperatures on the exact same scale the Carbonistas will announce in sombre tones: "This should be a wake-up call for us all! It demonstrates how the earth's climate is shifting due to our carbon emissions!" Dr Hillman says as much in the background article. Another good example is in this skeptic radio show in which Michael Marshall, "Marsh" as he is known, of Merseyside Skeptics comments on the mild November we've just had, at 05.30: http://skepticzone.libsyn.com/the-skeptic-zone-370-22nov2015. The convenient lie of climate change looks like an impressive edifice, but it is built on a foundation of broken careers, such as Johnny Ball and Prof. David Bellamy, see: http://hpanwo.blogspot.co.uk/2010/04/alternative-view-4-part-3.html. And maybe even actual lives. I believe that the Carbonistas would kill in order to keep their secret... and perhaps they already have, see: http://hpanwo-voice.blogspot.co.uk/2015/07/three-climate-scientists-killed.html. The next two weeks are going to be a very important fortnight in geopolitics. The outcome of the conference will decide how the global power structures implement their agenda for an authoritarian world government, in order to save the earth from their phantom menace.
See here for background: http://hpanwo-voice.blogspot.co.uk/2014/06/anything-to-save-planet.html.
And: http://hpanwo-voice.blogspot.co.uk/2015/01/2015-and-climate-change.html.
And: http://hpanwo-voice.blogspot.co.uk/2009/12/nobody-mention-climategate.html.
Posted by Ben Emlyn-Jones at 09:51