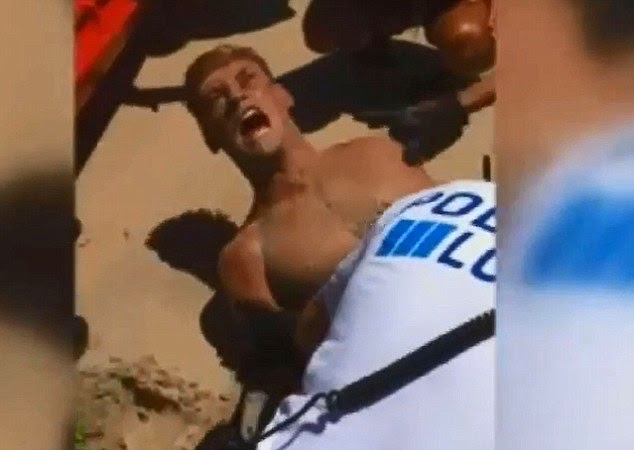 In a few days I will be heading to St Annes, to perform my lecture Real Zombies, see: http://hpanwo-voice.blogspot.co.uk/2014/05/ben-emlyn-jones-live-at-new-horizons-st.html, and it seems synchronous that zombie themes are once again invading the information coming towards me. Following the grotesque actions of footballer Luis Suarez, see: http://hpanwo-voice.blogspot.co.uk/2014/06/is-luis-suarez-zombie.html, another man has been apprehended for using his teeth inappropriately in a public place. This time the biter was a British man on holiday in Magluf on , one of the of the . The man was arrested after walking down the beach trying to bite everybody he saw. He had to be forcibly restrained by a large contingent of police and paramedics, and the source article includes a disturbing video in which the man roars incoherently like a trapped animal, see: http://www.dailymail.co.uk/travel/article-2680475/Briton-arrested-Magaluf-biting-bathers-high-Cannibal.html. This is not the first of such incidents in the region; another Briton was handcuffed by police in on after biting one of them. This bizarre behaviour has been blamed on a drug with the descriptive name of "cannibal". The Balearics are renowned as destinations for holidays in the sun and many of the resorts cater to young singles who want to make merry; this inevitably includes using drugs. This rumoured new drug seems to have a similar effect as "bath salts", the narcotic which caused problems in the United States, including when an intoxicated man attacked another and ate part of his face; the police had to shoot the assailant dead to stop the attack. Is this related to the wider agenda I've been trying to expose see: http://hpanwo-voice.blogspot.co.uk/2014/01/zombie-update.html?

Heidi King has informed me that the BBC have announced they are in preproduction of a new BBC3 TV show entitled I Survived a Zombie Apocalypse (Amusingly it is listed on the source reference page above another project with the working title: All You can Eat). They say: "Have you ever wondered what it would be like to be hunted down by the walking dead? If an apocalypse struck this could happen to you! Male or female. Old or young. Would you have the creativity, mental ability and survival skills to pass the ultimate test? A brand new BBC 3 reality series is looking for contestants; so whether you're a zombie fanatic, love the thrill of being scared or just think you'll look good being chased by zombies, we want to hear from you." This programme sounds like it was inspired by Derren Brown's Apocalypse, see: http://hpanwo-voice.blogspot.co.uk/2012/11/derren-brown-apocalypse.html. Once again we see the zombie trope being inserted into the media, deliberately or accidentally? Who knows where this path will lead us? I'll try to provide the answers next Monday at New Horizons; I do hope you can all join me.
Posted by Ben Emlyn-Jones at 18:42

Thanks for the article Ben. I've got a lot of mates (most ex-mates since my awakening), and there is a lot of Skunk 'weed' damage in the U.K, skunk is like 50 times more powerful. I used to be a bit of a casual pothead in my early teens (I'm 34 now)but the cannabis 15-20 years ago was very mild but now there is definitely a lot of damage being done that is almost incubating zombie like symptoms and behaviour that has now become normal, almost normalizing a zombie culture. I'm not sure if there is a link, I'm just commenting on it, but, there is something going on here. It's weird though and clearly visible, violence and anger should not be linked with Cannabis use but these new strains seem to accommodate it unlike historical Cannabis.

Perhaps there are latent 'spores' that have entered the human being via foods, pharm's, injections etc that are part of these delivery systems that are hyper-activated?. I know strains of Cannabis are engineered in laboratories and possible carry spores themselves, just a thought. There is definitely something going on here with the Zombie thing, thanks for the information. It is important that we can free the inverted mind do it cannot be remotely controlled by either technology or distruth as I feel this Zombification may well be a back up plan to use against those who are developing awareness psychologically. Of coarse, mind proper (not the arbitrary mind) is not conditioned and cannot be destroyed but the subtle consciousness is still linked to the psycho physical body.

No worries, X. Glad for your input. The two words are so similar that there may be an attempt to demonize cannabis even more. My mum was a dope fiend, but she had MS and so it did her the world of good. Her doctor recommended it... strictly off the record of course! There are many delivery methods for the "spores" than might result in zombie-like transformations in humans and animals, like the ones you mentioned. Also I think the chemtrails and Morgellons are connected. I'll be delving into this during my speech on Monday.

Hi Ben. Yes, I think Chemtrails etc are also connected. Good luck with your speech Monday, would have liked to have gone but it's finances and getting time off, drats!. Take care