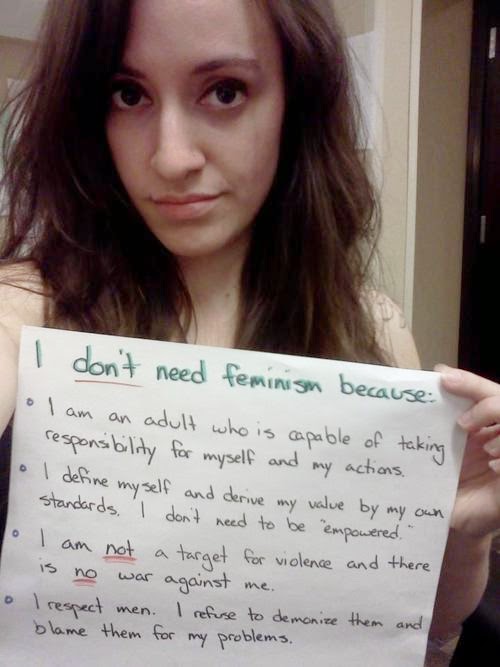 The BBC's trending service has reported something very encouraging, and I'm glad they didn't get away with suppressing it, because they almost certainly will have tried. More and more women are speaking out against feminism, see: http://www.bbc.co.uk/news/magazine-28446617. As the video explains, women have begun to see through the lies and cultural manipulation that they've been subjected to. We see the same phenomenon, for example, in opposition to racism against black people. Many people who oppose racism are white, those whom the racists often claim to benefit and support. More and more white people feel distress at the mistreatment of black people by whites and see it the same way many women now see feminism. It takes a lot of courage for women to say these things because I imagine feminists will be even angrier with them than they are with men for taking an anti-feminist stance. From the narrow and bigoted perspective of feminism these are "traitors!" or, as some of these ladies say in the video: "stupid!" "ignorant!" and "uneducated!" I'm not surprised that the Facebook page curator was harassed online and now needs to stay anonymous. I can't applaud their courage and intelligence enough. What is most interesting in the video is at the 1.45 mark where a woman provides a reasonable rebuttal, but in doing so she herself makes a major concession to the anti-feminists, calling herself a "true feminist" who doesn't want to "trample over men"; that's all very well if she's being sincere. The problem is that feminism and women's rights are conflated so deeply that the two are seen as synonymous and inseparable. To support one you have to support the other; if you're against one then you're automatically against the other. I don't see Womenagainstfeminism as anything negative at all, in the same way that I don't regard white people who oppose racism as negative. Remember that some of the most extreme feminist rhetoric is as brutal and hateful as that from the Ku Klux Klan; you just replace "black people" with "men". From my own perspective, I've lost friends because of my opinions on feminism, but this is a price I have to pay and I'm willing to pay it. In these background articles below I explain how feminism is nothing to do with women's rights, but instead is a form of mind control and an attempt to break down society so that it can be rebuilt into a new form, that of the New World Order.
See here for more details: http://hpanwo-voice.blogspot.co.uk/2014/05/a-friend-to-all.html.
And: http://hpanwo-voice.blogspot.co.uk/2013/11/clares-law-feminist-snoopers-charter.html.
And: http://hpanwo-voice.blogspot.co.uk/2013/08/anti-feminist-demonization.html.
Posted by Ben Emlyn-Jones at 19:36

Good article. Feminism is also a touchy subject in which I have had comments removed from online that are progressive and reach beyond this agendic feminism which is very different. I believe that equally devisive terms such as 'Class' that we all 'aspire' to is the feminism of the middle class and all this so called positive discrimination groups are those already socially privileged or is the elite that are trying to maintain there absolute privilage by supporting in divisive ways such middle class groups with relative privalige. These women are wives of the rich and powerful and have the pleasure and luxury of time, education and access compared to their working class counter-parts. This so called freedom exists only within the framework of the class system (a concept engendered by the elite and our 'aspiration/greed'). It is freedom at the cost of those who are oppressed at the bottom where the actual oppression and its cause is replaced by speaking out against the effects be it racism or whatever by the privilaged even if they mean well or is simply to plug their latest product. This type of feminism and positive discrimination is nothing more philanthropic exercises granted to a middle class or wealthy woman/man, In turn they (the so called middle classes) however will not be allowed to directly challenge the true agenda of the elite exploitative state who use such social divisions to divide us and at the same time keep us in hope that one day we too (with a little luck, ruthlessness and greed) become middle class too. People may say 'but there are issues of racism etc' yes I agree (I am of mixed heritage) but the reality is the riches and false power generated are systemically distributed with little or no value reaching the victims for their empowerment only for further division and within so called charities and organisations controlled by the elite that turn against those they claim to protect. This is done by the granting of various legal rights to groups and individuals who are all 'mates' elitist powerful bigwigs who use social paranoia and division in order to put in place laws for 'terroism', paedophillia etc that act as blanket laws hidden in which we actually loose all our rights to, we are disempowered. This system then turns so called Working class Men against working class women with fathers being denied access to their kids, financial sanctions etc, and then because of poverty and mental illness these same women have their children taken off them by social services, the cycle is complex and exploitative and works in matters of 'Race'and gender. It is high tide we raised our collective awareness by raising our individual awareness so that we can see through this manipulation that we feel a sense of fake emmpowerment in. We can solve our own problems without being manipulated by the multi agency consensus run by the same elite state that deliberately sets us against eachother. We are all aware that some of us have a penis between our legs or a vagina, some of us are Black, Brown, White....Whatever! Lets get beyond branches and get to the root so that we can live in a TRUE equal access society.

People don't realize there isn't any threat from the 'Left' or the 'Right'. The threat is a horrid standardised society that will use polarities as leverage to create a country run by f***ing idiots.

Absolutely true, X. Feminism is a kind of racism for the rich. Most feminists are middle class liberals who have rejected all other forms of prejudice. The manipulators of the NWO mind-control agenda probably agreed to deal with that by setting one half of them against the other. It's all about sowing discord and engineering unnecessary conflict. Also breaking up families. And it harms women's relationships to men. "Katy" the woman I used to know who fell out with me over this, see background links, used to tell me she badly wanted a man in her life, she wanted to fall in love with a good man and have a loving relationship. But her personal life consisted of a string of short term flings with total ratbags! I can see the connection. Her chosen dogma told her that the objects of her desire were "eeeeeeeevil!" No wonder it's messed her head up.

And, X, you're right about class too. At union meetings there were always lots of Marxists and some of them got it, on one level at least, about feminism, saying it was "a deviation from the class struggle!" But then they'd rant on about the "proletariat" and "bourgeois". What they don't realize is that the "Capitalist ruling class" doesn't rule at all. It's simply a hanger on and parasite to the REAL rulers of the world, the Illuminati Occupied Government.

Absolutely Ben I agree with you. For us who see beyond these things the Illuminati Occupied Government and our other discoveries make us truly non conformist, Left and Righ have no time for us and even other 'truth' seekers (truth being objective in empirical terms), even 'Marx' has become like a religious icon be it just stripped of outward religiosity rather than him being an interesting yet flawed character. This is how it will and should be we just need to not give up or let ourselves get overwhelmed be it by attaching our true selves too much to the 'thinking' process or in cases of attack which can range from technological or psychological. Thanks for the discussion my friend and it is great to meet rare individuals who are able to be sharp yet inconspicuous. When we are sharp we do not get confused by others, being inconspicuous means we dont contend. Because we dont get confused by certain people we can be spiritually open in the truest sense and not contending we can remain calm and act with equanimity. Cheers Ben

Feminazis are the worst. But not all feminists are like that Ben. Just the ones at the extreme end of the scale. Some feminists just want to be in control of their own body, they want the right to vote, the right to own stuff. That's not detrimental to society. That said, I do think the homogenising of the sexes is bizarre and irritating (and extreme-feminism is part of that). From a female perspective, I'm fed up with men pushing into our traditional spaces, like Gok Wan with his 'Girls! We all know what it's like to feel bloated' etc. NO YOU DON'T GOK. YOU DON'T HAVE A WOMB! The sexes are different and that should be celebrated. I personally don't want to mess with a car engine, follow football or get into fights (have you noticed, btw, just how many sports newscasters are now women? That's odd to me). But getting back to my point, not all feminism is bad and I don't have time to walk you through why this is. You are a well read man and I wonder whether you have read much feminist material? Like Natalie Angier's 'Woman' - I promise that it isn't militant. Equally Moran's 'How to be a Woman' is a great read. In fact, if you are going to read something, read that because it's more up to date, and also, it's funny to boot.

Hi Anon, thanks for the recommendations. I certainly don't want to criticize campaigners for women's rights because that is a legitimate and noble cause. This is why I deplore the West's creation and support for the regime in Saudi Arabia and find it ironic that nations in which feminism is dominant turn a blind eye to this atrocity. However I don't see feminism and women's rights as the same thing. They've been totally conflated, but I think that's a mistake. Cheers :-)

All this really comes down to is the 'collectivist' mentality which will attach itself to anything, like a limpet. They're chained to a 'them and us' outlook and aren't fussy about what form the polarisation takes, be it class, race, or gender (gender is in vogue, race is very much out). Feminists themselves range from the post-modern liberal to the socially conservative liberal. In short: there's no such thing as coherent Feminism. But the promise of feminism is enough for the limpets to attach themselves to if they find Marxism too heavy going (and if they're quite happy with their living standards).

People who identify as transgender thraten to bridge this mythical gap, so the socially conservative type of feminist (who have little in common with other feminists) have begun feeling rather indignant about it. Their mask is slipping.