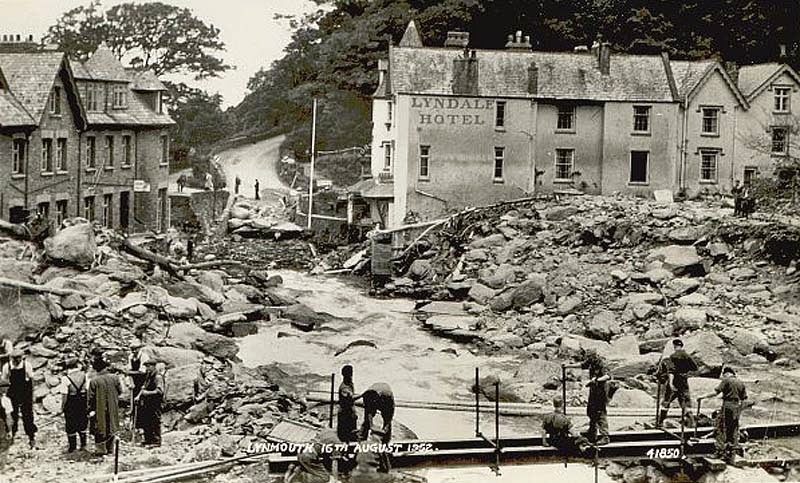 Lynmouth is one of the most picturesque of seaside towns with its small harbour and promenade with old stone houses stacked up on the steep wooded hillsides behind it, leading up to the wilds of Exmoor in north Devon. It's a major tourist attraction and has been the feature of many postcards. It's hard to imagine that the place was almost destroyed once by an enormous flash flood. On the night of a freak storm dumped nine inches of rain onto , which was already saturated from a very wet summer. The water thundered down the rivers of East and carrying trees and rocks with it until it reached Lynmouth where it inundated the entire town. Houses were submerged by waves and then demolished from impacts by the debris from the rivers. Cars and lamposts were washed out to sea. A hundred buildings were destroyed and all the town's bridges. The entire harbour was washed away. Thirty-four people were killed and almost 500 made homeless; some of the bodies were never recovered. The Met Office said that the disaster was caused by an unusually deep area of low pressure and a weather front exacerbated by the geography of ; the lack of satellite photography in those days made such storms hard to predict. Here's original raw footage of the incident from the BBC: https://www.youtube.com/watch?v=m1xiad4Ppe0.

However not everybody is satisfied with that explanation, including a group of the survivors. Fingers have been pointing, not upwards at the sky, but eastwards towards the Ministry of Defence in . For a number of years the UK Government had been experimenting with weather modification techniques which involved filling rain clouds with artificial material to make them larger and more powerful. This is known as "cloud seeding" and it's been tested since the 18th century when people discovered that smoke from large fires lit on the tops of hills could effect the clouds around them. Since the invention of aircraft this has became much more effective because material could be released directly inside the cloud by an aeroplane or helicopter flying around inside it. Tests were done, including the 's "Project Cumulus" which might be responsible for the Lynmouth flood. They seeded clouds with salt, silver iodide and dry ice- frozen carbon dioxide, over the three year period. This is one of many similar experiments that have been carried out all over the world. Proponents of cloud seeding justify it by claiming it can be very useful and could even save lives by alleviating droughts and heatwaves. But in truth it was always intended to be a weapon of war. It has been deployed already with devastating effect. During the Vietnam War American forces initiated "Project Popeye", a highly classified mass cloud seeding programme along the western borders of to increase the monsoon rains and flood out the Viet Cong's supply routes from the North. The roads of the "Ho Chi Minh Trail" were all washed away or covered with landsides, bridges were destroyed and the supply routes cut off. Was the Lynmouth flood caused by a similar experimental operation? Attempts to investigate have been fruitless so far; the MoD has apparently "lost" the papers relating to Project Cumulus. Nevertheless several RAF officials have spoken out and they've produced flight-plans and log books which show that cloud seeding in the area did take place. Also analysis of the local environment has revealed the residues of chemicals that could be associated with cloud seeding. This radio documentary explores the possibility: https://www.youtube.com/watch?v=wbVpNBku0LE. Obviously the UK Government is not too eager to admit this. They'd obviously not like to be found guilty of killing thirty-four people and almost wiping out a whole town through gross negligence; imagine the compensation payouts! However there could be another motive to be furtive. Any admission of accountability for Lynmouth might make people ask more questions about weather modification experiments, including any active operations. Are they still going on today? Another incident that was nearly as bad happened in 2004 at Boscastle in ; miraculously nobody was killed, see: https://www.youtube.com/watch?v=SxweiRNlHbo. Were any strange aircraft seen buzzing around the area in the days and months beforehand?
Posted by Ben Emlyn-Jones at 18:46

Thanks for the links Ben

Completely off-topic (sorry Ben) but Chris Spivey has been arrested on trumped-up harassment charges. Dawn raid, by all accounts. Check out his Facebook page and his website:

Just watched Timeshift on BBC4 tonight Ben (you can find it on the BBC iPlayer if you have the stomach) Quite a detailed piece on the Lynmouth flood and how it came without warning. Lots of archive footage. Also discussion of how the poor moorland management above Lynmouth had served to channel the heavy rain into the valley. Did they mention any other possible contributory factors? Did they f*ck!

Thanks for the tip, Neil. I'll have a look. I can't help wondering if this was murder. A field test using Lynmouth as a live target. Maybe the plan was to see how many people they could kill. Honestly I wouldn't put it past them.