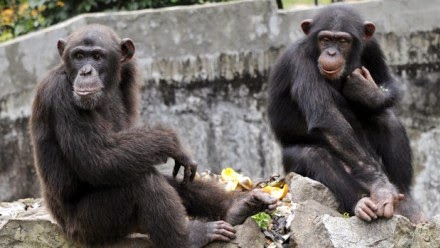 Most living organisms have developed ways of communicating with others, with varying degrees of complexity. Anybody who watches animal behaviour, from ants to antelopes, can see quite clearly that they're aware of each other's presence and disperse information between individuals and groups. Animal language is generally more elaborate among more intelligent creatures; and also in species which are very social and who live in families and groups, and therefore spend a lot of their time having to focus their attention on other members of their group. It was thought for a long time that human beings alone have evolved the ability to use the kind of complex language we do, with structured sentences, grammar and deep abstract ideas, but in recent years that notion has been disputed. It's now a completely acceptable idea that whales and dolphins have a humanoid language. Thanks to researchers like Dr Denise Herzing, we now know that dolphin noise obeys Zipf's Law, in other words the whistles and clicks dolphins produce are not merely random noise at all; they appear to be connected together and related to some intelligent meaning, see: https://www.ted.com/talks/denise_herzing_could_we_speak_the_language_of_dolphins. Dr Herzing's twenty-eight year research project is to decipher this language, for that is what it is. If we can do that then humans should be able to talk with dolphins in the same way we talk with each other. Sure, we can't use our own voices because human and dolphin vocal organs can't articulate each other's sounds, but we could achieve it using a computer and audio synthesizer. This was a scenario in one of Arthur C Clarke's books, , see: http://en.wikipedia.org/wiki/Dolphin_Island_(novel). Researchers studying chimpanzees in have also noticed that they make sounds and gesture a lot at each other and it was quickly understood that this was a form of communication. However, when chimps in captivity were taught human language the researchers were astonished at how well they picked it up. Chimps can't be taught to speak because their mouths and vocal chords are only able to utter chimp noises, but they can learn sign language, the same kind deaf people use. One chimp, a female called Washoe, ended up with a vocabulary of 350 signs, enough to have a simple conversation with a human who knew sign language. What's more she and other chimps began speaking to each other the same way and even invented new signs of their own using compounds of words they'd been taught. These compound words displayed logical features, for example their word for swan was "water bird" and thermos flask was "metal cup drink". Some natural human languages contain a lot of compound words like this too; Chinese and German have a particularly high number of them. It's also been shown that chimps can read, up to a point; they can comprehend simple pictograms, a series of images that represent various concepts. This was totally groundbreaking and it sent the researchers scurrying back into the jungle to take another look at the chimps in the wild again. Their theory was confirmed, chimps do indeed have a complicated language involving simple sounds and many gestures. This is new research, but so far sixty-six signs have been identified by the team led by Dr Catherine Hobaiter and Dr Richard Byrne, who are writing a book on the subject. A mother displaying the sole of her foot to a baby means "climb on my back", scratching one's arm means "groom me please" and nibbling on a leaf is flirting with the opposite sex. There may be more signs that the researchers have not yet isolated, see: http://www.bbc.co.uk/news/science-environment-28023630.

This is quite remarkable, especially when you combine the chimpanzee study with Dr Herzing's work. How many other animals also have a complex language? Poodles? Pigs? Pigeons? It's amazing to think that one day we may be able to have conversations with other creatures just like Dr Doolittle. What will they say to us? Will we be able to understand all the information they want to convey or will the differences in their mental structure be so diverged from our own that it will make their speech sound like gibberish (To be honest, I have this problem with some of my fellow specimens of Homo sapiens). Incidentally, it makes me wonder what chance we have with projects like SETI that plan to contact intelligent beings out in space. What surprises me is that this area of scholarship has not had more attention; do so few people really want to know what their pet guinea pig has to say to them? But as always, this knowledge has implications and I think a lot of people are frightened of those implications, especially people in power. It has always been the convention in society to emphasize the differences between humans and other animals, to give the impression that human beings are set apart from, and are above, other beasts, almost as if we're a separate biological kingdom. This was probably the real reason Charles Darwin's discoveries were greeted with such hostility. The theory of evolution didn't damage the church on a theological level because it disproved biblical creation; after all, Darwin himself was a Christian who went to church every Sunday. No, the real threat came from the fact that we don't like to think of ourselves as being animals. threw us right back into the natural world which we believed we'd risen above. Today evolution has been accepted by most people, except in some very staunch Christian communities in the and a few other places. However we still like to see ourselves on a pedestal above the other beasts and our superiority in intelligence from them is our biggest source for this worldview. Complex language is one of the hallmarks of high intelligence, self-awareness and consciousness; as long as we think only humans have this we can still maintain the comforting belief that humans are special. The revelation that even complex language is not unique to our species would be a huge game-changer; it would make us see our place on the planet very differently. The biggest shift would have to be in bioethics, animal rights under law would have to be totally reassessed. Things we take for granted today like circuses, farming, the meat industry, animal experimentation, equestrian sports, dolphin performances, whaling etc etc would come under a scrutiny that they've never had to endure before. Maybe what scares these people is the guilt; it certainly scares me. If we decide that mistreatment of animals is wrong in light of the new knowledge about their languages, then acknowledgment of that fact would mean we'd have to face up to what we've done to animals in the past. If we eventually manage to decode the grunts of a factory farmed pig he might not have many pleasant things to say about we humans. Wouldn't it be more convenient just to pretend it's not true?
Posted by Ben Emlyn-Jones at 18:33

Hi HPANWO Voice. Very interesting indeed. Animals can have much greater perceptive abilities than us and who is to say that communication is any less complex? Infact much of our communication is destructive rather than building bonds etc. I believe that evolution works on both the phenomenal level but also the nouminal level, viz that which is beyond the material. With this as the case it is true that this awareness manifests itself via conscious beings be it human or otherwise, this universal awareness operates on different frequencies but is ultimately the underlying principal. Communication therefore is not just words but intuitive and on many levels. It is interesting to note that there are records and stories of Sages and Wise developed beings having wild mountain tigers etc at peace with them and not attacking them as normally happens when people get lost in wild places, some even having them as pets or been seen to ride on the back of them. This type of communication becomes more possible when we become more aware, words such as intuitive-psychic communication come to mind as what appears different is not really our true perception more a 'finite' 'essence' of seeing whereas the nature of our seeing is uniform, infinite and pure. I guess this may also be relevant with other perceptual realms such as, ghosts, alien communication but ultimately I believe that these potentials are a result of our karma type cycle which depends on our mental imprints such as thoughts, passions, cravings, which act like cosmic echoe's that appear to run a circular cycle. It is an interesting fact that when I had a spiritual Awakening about 4 years ago which I later began to realize was the releasing of inherent Wisdom (Prajna, Light, Self Nature etc) I became alongside giving up some other things in my life a Vegetarian without thinking, I could not physically or consciously eat meat, I guess this is Communication through Awakening, having a connection to other living beings and creatures, as precious as that sounds!. There are certain animals such as owls that are linked with the 'strange/unknown' etc that are connected with trans-being communication that act on different levels, fortune fortelling, domestic pets are often associated with messages. They are all linked with our very own presence and I feel animals have infact a closer connection to us to that of Ghost's/Spirtis. I guess it's all symbology to something that cannot be fathomed by basic cognition dual views, e.g. permanence and impermanence, ego and its objects. It is a fascinating subject.

Hi X. I know what you mean about evolution. I've been studying Rupert Sheldrake and his view on "morphogenetic fields". He's written a great book called "The Science Delusion" to piss off Richard Dawkins! I think the Illuminati have deliberately tried to sever our bond with nature and the downplaying of that information is a part of that. Will have to write a lot more on that subject. Thanks for yet another intelligent comment. I appreciate your interest.